I am not used to reading sweeping critiques of engineers as destroyers of community. But a prominent Dallas publisher and editorialist recently aimed a full, frontal attack on us in an article subtitled “A reflection on how engineers ruin cities”.


Wick Allison, of D Magazine, thinks we have ruined our cities by building freeway systems that divide communities, by creating cold, impersonal public spaces and by laying concrete over every piece of nature we could find. “Don’t believe a word the engineers tell you,” he advises. “Don’t accept any of their assumptions. They paved over this city once, and given the opportunity, they will do it again.”


What gall! My first reaction was to shoot off an email challenging him to survive a month without the products and services created by people he seems to despise. But after I cooled down, something in his argument began to eat away at me. I live in a dynamic city made possible by engineers – but, yes, I too wish things were different.


Urban planners and government leaders were at the helm when we began modernizing cities in the 50’s and 60’s, so why not blame them? All we did as engineers was build to their specifications the roads, buildings, factories, sewer systems and power grids that Americans wanted. 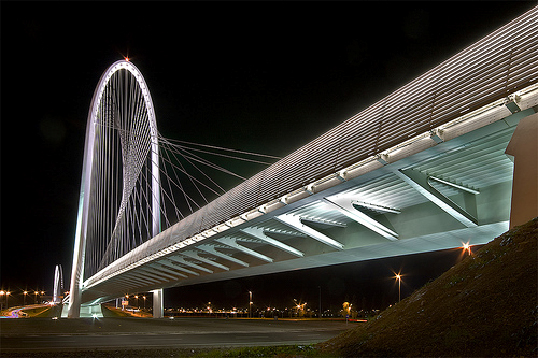 But here’s a fair question: At what point did we begin to leave “design” out of the design process? In the go-go 50’s and 60’s we were all about America’s power to tame the untamable – nature, traffic and the Soviets. The U.S. was an emerging economic powerhouse, but having just cleared the Great Depression, we focused on just meeting the functional demands of clients at the lowest bid. The great tradition of creating objects and infrastructure that are functional, beautiful and daring got lost. The ancient Romans had it right: their roads and water distribution systems were not only marvels of engineering, but still have the elegance to stir the human spirit. Of course, with their deep pockets lined by tribute they didn’t have to worry about low bid.


We are going to get a second shot at creating smarter, greener and more beautiful cities, largely because much of what was built over the last century is now crumbling. Repair, replacement and deferred maintenance, combined with new demands spurred by growth, will drive a staggering range of new projects that will shape the quality of our lives – for better or worse. The American Society of Civil Engineers estimated in 2008 that we will need to invest $1.6 trillion to return our infrastructure to good condition – and that’s just for starters.


We must help our clients understand the value of creating new technologies with a strong aesthetic conscience. A few years ago green design was a fad, and now we call it good engineering. The same push must be made to factor beauty into our creative works. We are seeing some examples, Spanish engineer and architect Santiago Calatrava sets a high standard with his bridges that completely redefine landscapes.
The cities we are re-building can’t be just functional concrete, rebar, glass, asphalt, or brick. They must give flight to dreams in order to lift our communities. I hate to admit it, Wick, but our critics are sometimes right.

Geoffrey C. Orsak is dean of the Southern Methodist University Lyle School of Engineering. He can be reached at dean@lyle.smu.edu .