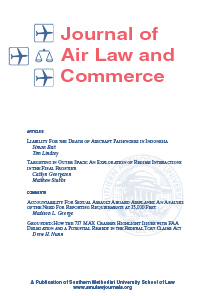 The Journal of Air Law and Commerce, a quarterly publication of the School of Law, is the oldest scholarly periodical in the English language devoted primarily to the legal and economic problems affecting aviation and space.

Since its foundation at Northwestern University in 1930 and move to SMU in 1961, the Journal of Air Law & Commerce continues to publish articles addressing domestic and international problems of the airline industry, private aviation, space, and general legal topics with a significant impact on aviation. Articles are written by distinguished lawyers, economists, government officials, and scholars. The Journal also publishes editorial comments written by students. Readership is worldwide with more than 2,300 subscribers in 54 countries.

The Use of Law to Address Space Debris Mitigation and Remediation: Looking Through a Science and Technology Lens

By Annie Handmer & Steven Freeland – Increasingly over the past six decades, space exploration and technology have revolutionized the world we live in. The landscape in outer space has continued to evolve rapidly, presenting new challenges for a much slower moving legal framework as well as for peaceful uses of space more generally. In particular, space debris has emerged as a pressing global threat. [...]

By Tanja Masson-Zwaan – Two companies carried private citizens to the edge of space in July 2021. Although suborbital flights have so far taken place within one jurisdiction—they start and end in the same state, do not pass through foreign airspace, or meet both criteria—they will become international when transportation between two points in different states via outer space becomes a reality. International law is ambiguous about the regulation of suborbital flights; neither international air law nor international space law explicitly apply. [...]

By Glenn Reynolds & Leigh Outten – Pulsed Nuclear Space Propulsion, researched in the 1950s and 1960s by such eminent physicists as Freeman Dyson, Ted Taylor, Theodore von Karman, and Hans Bethe, involves propelling large spacecraft using compact nuclear explosions from specialized atomic devices. This technology is often known by the name of the Air Force project in which it was developed: Orion. [...]

3D Printing in the Aerospace Industry: Emerging Legal Issues for Counsel and Insurers

By Lisa Savitt et al. – This Article covers the fast-growing use of additive manufacturing, also known as 3D printing, in the aerospace industry for critical and noncritical parts. The use of this technology raises regulatory and liability issues in the United States and Europe. Insurers of aerospace-related companies must also consider how to plan for the risks involved with the technology and the new entrants in the market who are designing, selling, and distributing additive manufacturing printers. [...]

Vertiports: Ready for Take-off … And Landing

By Benjamyn Scott – While aviation has been used in transportation for decades, the use of vertical takeoff and landing (VTOL) aircraft for large-scale, low-cost, green, sustainable, and integrated mobility in populated areas is a new phenomenon. Despite the importance of ground infrastructure for embarkation and disembarkation of passengers, cargo, and mail, questions remain on how these “vertiports” are or should be regulated and how they will relate to existing regulated ground infrastructure such as aerodromes, airports, and heliports. [...]