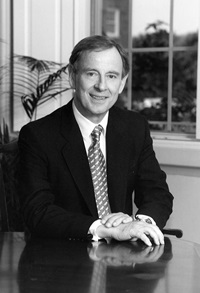 Cary Maguire was trustee emeritus of Southern Methodist University, an honor that reflects his outstanding service to the University as a member of the Board of Trustees from 1976 to 2000.

In addition to his founding grant to create the Maguire Center for Ethics and Public Responsibility, Maguire also endowed a university-wide professorship in ethics at SMU. He provided additional funds for programs and facilities in SMU's Edwin L. Cox School of Business, including the Maguire Energy Institute, the Maguire Chair in oil and gas management, and the Maguire building housing undergraduate programs in the Cox School. The cumulative total of his gifts to SMU was nearly $9 million.

Maguire was a member of the Executive Committee for the Campaign for SMU, which surpassed its goal by raising nearly $542 million in the five-year campaign that concluded in spring 2002. Maguire was co-chair of the Cox School Campaign Committee. His other SMU leadership positions included service as the chair of Cox School of Business Executive Board, the Maguire Energy Institute Advisory Board, the Maguire Center for Ethics and Public Responsibility Advisory Board, and the Investment and Audit Committee; member of the President's Leadership Council, and directorships of the Foundation for Business Administration and the John Goodwin Tower Center for Political Studies in Dedman College. In 1995 he and his wife, Ann, were among the first recipients of SMU's Mustang Award honoring individuals whose longtime service and philanthropy have had a lasting impact on the university.

Maguire was Chairman Emeritus of Maguire Oil Company and Maguire Energy Company, and Chair of Components Corporation of America. His national leadership positions included service on The National Petroleum Council, the Executive Committee of Mid-Continental Oil and Gas Association, and membership of the Madison Council of the Library of Congress, where he funded the Maguire Chair in Ethics and American History.