DALLAS (SMU) – A NASA-funded team led by SMU researchers think that their small, lightweight device developed to measure spaceship velocity will improve the odds of successful landings on Mars and other planets.

Smaller, they say, is better in space.

The optical microresonator built by the team is only 2 millimeters in length, compared to the velocity-monitoring tool most commonly used on spacecraft – the Fabry-Perot interferometer – which can be as long as 500 millimeters. NASA and other space agencies may be able to use the microresonator to get an accurate, quick measurement of how fast a spaceship is moving in a specific direction.

The first proof-of-concept results have been published in AAIA Journal.

“Every gram of a device makes a huge difference in how much fuel I will have to have on a spacecraft and how many other items I can include as payload on that spacecraft,” said SMU’s Volkan Ötügen, one of the creators of the optical microresonator.

Ötügen is senior associate dean of the Mechanical Engineering Department in SMU’s Lyle School and director of the SMU MicroSensor Laboratory. The device he and other researchers built uses a phenomenon known as “whispering gallery mode.”

A spacecraft’s velocity is a key measurement during its descent, because the time between when a spaceship enters a planet’s atmosphere and the time it lands is usually only minutes at most. And costly accidents like the crashed European spacecraft Schiaparelli on Mars underscore how quickly a mission can go wrong when the spacecraft is given wrong information.

How the microresonator works

A whispering gallery is an enclosed circular or elliptical area, like that found beneath an architectural dome, in which whispers made at one end of the dome can be heard clearly on the other side.

That’s because sound waves travel around the circle or dome, with very little volume lost. Light waves can do the same.

In the microresonator, a whispering gallery was created using an optical fiber, which light can travel through.

Representation of the whispering gallery mode resonator and its operation.

“The inner surface of this small circular cavity acts like a mirror and the light injected from the optical fiber goes round and round inside the cavity millions of times,” Ötügen said.

A “resonance” occurs when the wavelength of the light is an exact multiple of the distance it takes to travel around the cavity one time, he explained.

At resonance, some of the light is either absorbed or escapes through the surface. So the light that comes out of the whispering gallery is dimmer than what went in.

“When I see a drop in the light I know resonance has occurred at that wavelength,” Ötügen said.

Recording that shift in the wavelength can be used to measure different metrics, including a spaceship’s acceleration. Devices that use whispering gallery modes produce very precise results in spite of their small size. 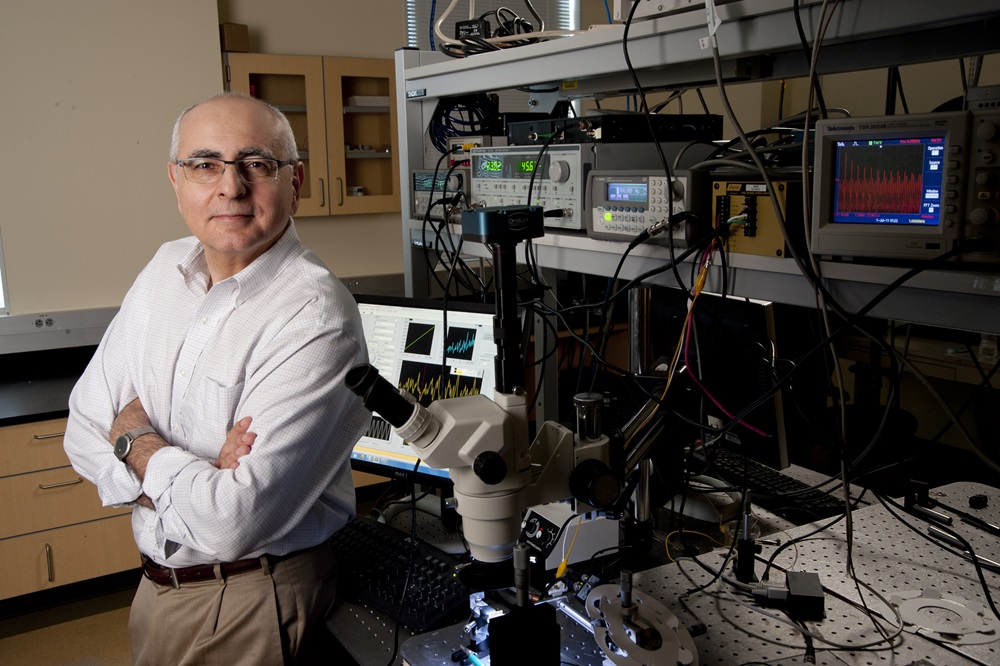 The team at SMU has previously demonstrated the use of whispering gallery mode resonators for other applications, including the sensing of force, temperature, and electric fields.

What the microresonator uses to get data

When a spaceship is directed to land on Mars or any other planet in our Solar System, it has to first travel through the layers of gas known as the atmosphere that envelope the planet. On Mars, this thin atmosphere can cause a spaceship to slow down from its nearly 12,500 miles per hour.

Pockets of gas of varying density can also nudge the spacecraft off course as it descends and the spacecraft must safely decrease its speed to zero in a short time frame.

All of this can make planetary descent extremely difficult. It takes accurate measurements of direction and speed to help it land safely.

The microresonator can collect the information the spacecraft’s computer needs to determine velocity by using backscattered light from the atmosphere. All planets in the Solar System have an atmosphere, so this device could theoretically be used on any of them.

Light rays in space get diverted from their direct path when they strike gas molecules making up the atmosphere. So when the spaceship sends pulses of laser light into the atmosphere in its path, that light gets bounced back to the spacecraft.

Tiny amounts of this backscattered light are transmitted to the microresonator and analyzed.

The relative speed between the atmosphere and the spacecraft creates what’s known as the Doppler effect – the change in wavelength in relation to an observer, here the spacecraft, that is moving through the atmosphere. You see the Doppler effect working with sound waves in the siren of an ambulance, becoming higher pitched as it gets closer to you and then lower pitched when it is moving away.

Light waves work the same way, except they turn different shades of color depending on how fast they are moving.

From the change in the wavelength, the velocity of the spacecraft can be determined.