Yes, man run faster than women, but over shorter distances -- not by much

SMU (Dallas) – Conventional wisdom holds that men run 10-12 percent faster than women regardless of the distance raced. But new research suggests that the between-sex performance gap is much narrower at shorter sprint distances.

It has long been established that men outpace women by relatively large margins in mid- and longer-distance events. But speed over short distances is determined by different factors – specifically, the magnitude of the ground forces athletes can apply in relation to their body mass. Women tend to be smaller than men and, all things being equal, muscular force to body mass ratios are greater in smaller individuals.

An accomplished athlete and former assistant director of strength and conditioning at Bowling Green State University, McClelland has always had a natural interest in the scientific basis of human performance.

More broadly, the understanding of comparative strength, speed and endurance capabilities of male and female athletes has been a highly challenging issue for modern sport.  Yet, prior to the new SMU study, quantitative understanding of sex performance differences for short sprint events had received little attention. McClelland’s background, male-female differences in force/mass capabilities, and existing data trends led her to hypothesize that sex differences in sprint running performance might be relatively small and increase with distance.

Her analysis of race data from sanctioned international competitions between 2003 and 2018 supported her initial hypothesis. These data revealed that the difference between male and female performance time increased with event distance from 8.6 percent to 11 percent from shortest to longest sprint events (60 to 400 meters). Additionally, within-race analysis of each 10-meter segment of the 100-meter event revealed a more pronounced pattern across distance - sex differences increased from a low of 5.6 percent for the first segment to a high of 14.2 percent in the last segment. 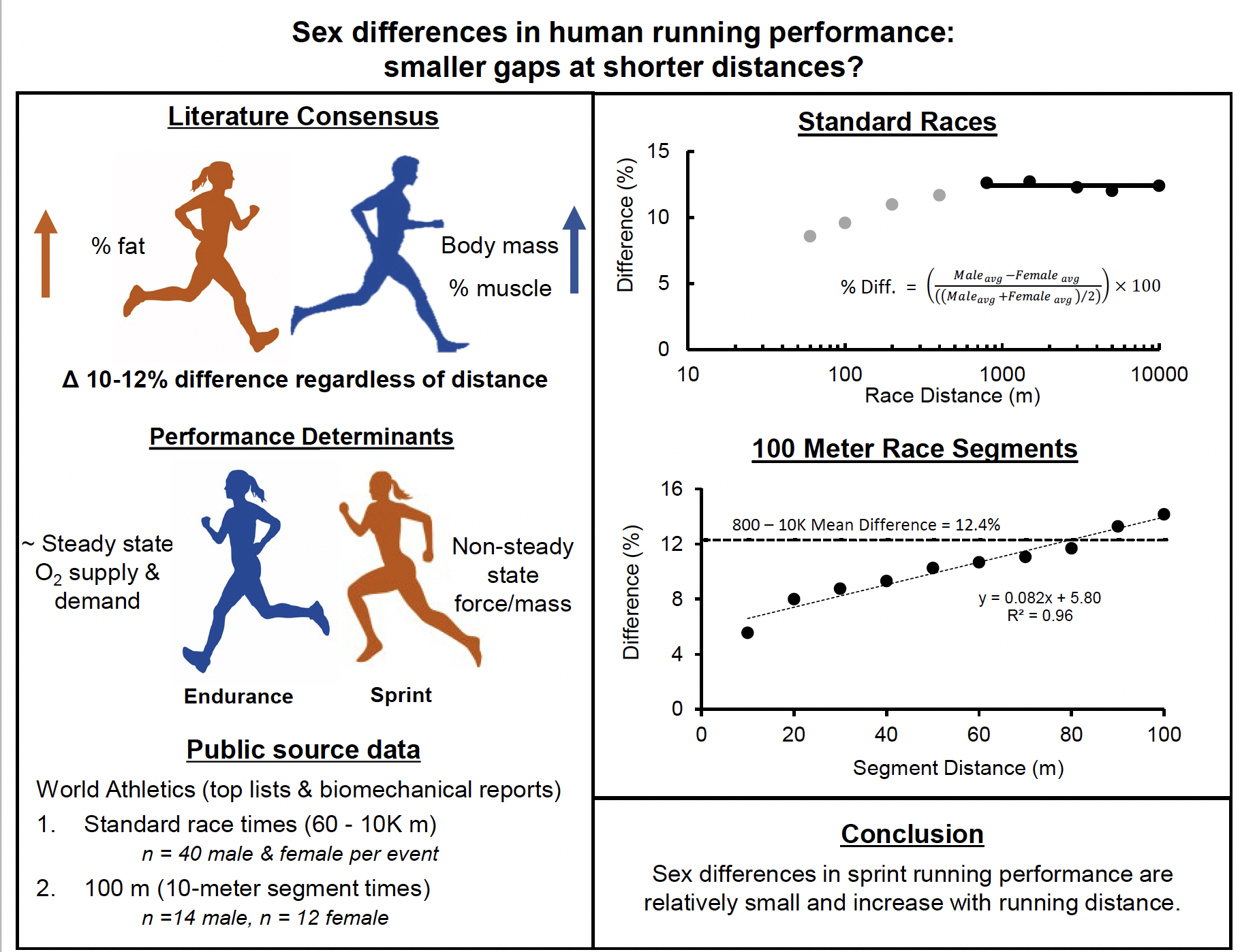 Why then are women potentially less disadvantaged versus men at shorter sprint distances?

In contrast to other running species like horses and dogs, there is significant variation in body size between human males and females. If all other factors are held equal, body size differences result in muscular force to body mass ratios that are greater in relatively smaller individuals. Since sprinting velocities are directly dependent on the mass-specific forces runners can apply during the foot-to-ground contact phase of the stride, greater force/mass ratios of smaller individuals provide a theoretical relative advantage. Additionally, the shorter legs of a female runner may confer the advantage of more steps and pushing cycles per unit time during the acceleration phase of a race. These factors offset the advantages of males (longer legs and greater muscularity) that become more influential over longer distances.

Consider the example of Shelly-Ann Fraser Pryce, a Jamaican track and field star who is 5’0” tall, 115 pounds, and who holds two Olympic and five World Championship gold medals in her signature 100-meter event. Her time at the 40-yard mark of a 100-meter race has been estimated to be as brief as 4.51 seconds—a time faster than nearly half of all the wide receivers and running backs that tested in the National Football League’s Scouting Combine in 2022. In contrast to Shelly-Ann Fraser-Pryce, most of these aspiring NFL football players are over 6’ tall and 200 pounds.

The research study “Sex differences in human running performance: Smaller gaps at shorter distances?,” was conducted by McClelland and Weyand and has been published in the Journal of Applied Physiology.

SMU is the nationally ranked global research university in the dynamic city of Dallas. SMU’s alumni, faculty, and nearly 12,000 students in eight degree-granting schools demonstrate an entrepreneurial spirit as they lead change in their professions, communities, and the world.

The Annette Caldwell Simmons School of Education and Human Development at SMU (Southern Methodist University) reflects the University's vision of serving the most important educational needs of our city, region and nation, graduating students for successful careers in a variety of fields and providing educational opportunities beyond traditional degree programs. Recognized as a unique and transformative leader in education research, practice and policy, the School is committed to rigorous, research-driven programs that promote evidence-based, effective practices in education and human development.