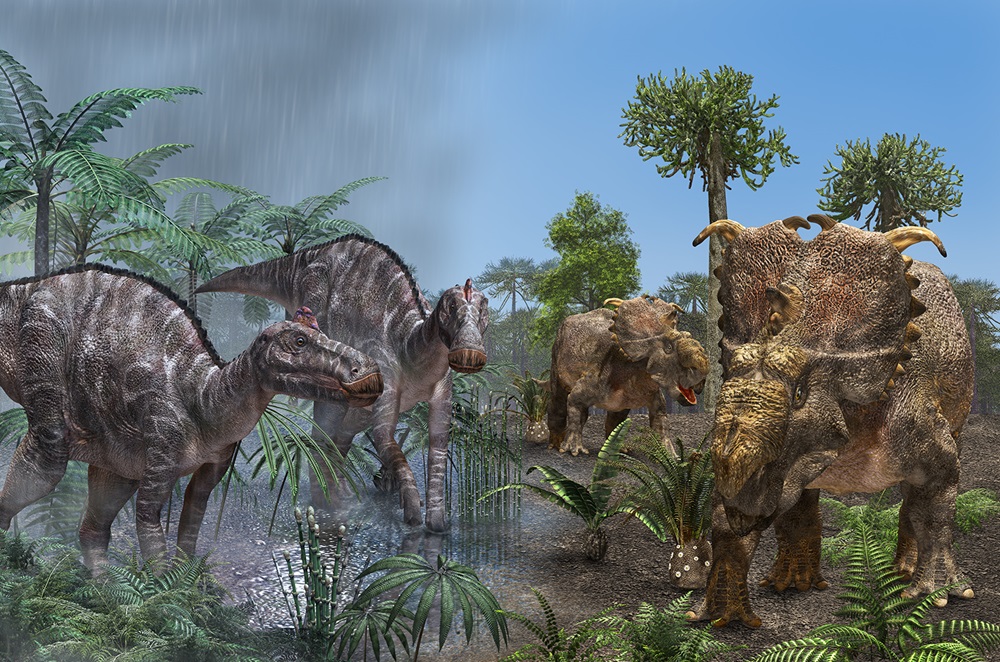 Herbivorous dinosaurs that were prevalent in the Cretaceous of Alaska include hadrosaurids, or duck-billed dinosaurs, and ceratopsids, or horned dinosaurs.

DALLAS (SMU) –  A new study led by SMU paleontologist Anthony Fiorillo identifies the key role precipitation and temperature play in structuring vertebrate herbivore dinosaur populations in Alaska. The findings, which are published in the journal Geosciences, may also provide historical insights into the consequences of climate change.

“Our study shows the fundamental role precipitation plays in structuring dinosaur populations during one of the warmest windows in Earth history, and that this insight can help shape what we need to focus on as our modern world warms,” Fiorillo said.

Scientific investigation into current climate change often considers ways to mitigate temperature changes or uses modeling to predict how a future, warmer world would look. This study provides a window into the deep history of the ancient Arctic and reviews ample evidence for a flourishing high-latitude terrestrial ecosystem where the local paleoclimate was a primary driver in structuring significant abundances of large-bodied plant-eating dinosaurs in the local environment.

The research suggests that the mean annual precipitation, or MAP, played a more direct role in determining the distribution of herbivorous dinosaurs than did the mean annual temperature, or MAT. The study considered animal and plant life and ancient climate conditions of a high terrestrial ecosystem recorded in Arctic Alaska’s Prince Creek Formation, the lower Cantwell Formation of Denali National Park, and the Chignik Formation, Aniakchak National Monument.

“I think people use the terms ‘climate’ and/or ‘climate change’ often times not fully appreciating all of the parameters that define climate,” Fiorillo said. “One of the key parts of our study is that we were able to tease apart two critical parameters and show their relative role in shaping large-bodied herbivore populations.  This is important because these dinosaurs would be classified as keystone species, that is, they were critical to the health of the ecosystems in which they lived,” he said.

Put another way, the dinosaur’s influence on their environment, Fiorillo explained, is similar to modern elephants and how they manipulate their environment which has secondary effects that are critical to other animals in the ecosystem.

One of the other study collaborators, former SMU doctoral student Yoshitsugu Kobayashi, now an associate professor of paleontology at the Hokkaido University Museum in Japan, explained that this study is part of a bigger question regarding how dinosaurs moved across the Bering Land Bridge connecting North America and Asia during the Cretaceous.

“Hadrosaurids successfully migrated between these two continents, but not ceratopsids, and it may be that the difference in habitat preference is the reason,” Kobayashi said. He emphasized the need to go back to Alaska to collect more data to test this idea.

This study represents the latest in a series of discoveries and observations Fiorillo and his research partners have made over the years in Alaska. Fiorillo first traveled to Alaska in 1998, when dinosaur fossils had been found in only two areas of the state. Now, almost 25 years later, Fiorillo and his colleagues have made a number of dinosaur discoveries across the Alaskan landscape.  He named two of the four new dinosaur species recovered in the state.

Fiorillo is a Research Professor  in SMU’s Roy M. Huffington Department of Earth Sciences; a senior research fellow at SMU’s ISEM; and curator emeritus of the Perot Museum of Nature and Science.

SMU is the nationally ranked global research university in the dynamic city of Dallas. SMU’s alumni, faculty, and nearly 12,000 students in eight degree-granting schools demonstrate an entrepreneurial spirit as they lead change in their professions, communities, and the world.