Dallas (SMU) – In the year 2026, when the inaugural class of 8th grade students at West Dallas STEM School receive their high school diplomas, they will be eligible to apply for a dedicated SMU scholarship thanks to new financial aid program created by the SMU Student Senate.

The 2021-2022 Student Senate has created two need-based scholarships –one to help students from the SMU-supported Dallas ISD West Dallas STEM school, who will begin applying to college in four years, and one to help students in SMU’s Rotunda Scholars Program. As president of the SMU student body, Austin Hickle was determined to inspire other student leaders to leave a legacy of opportunity for future SMU students faced with economic challenges. 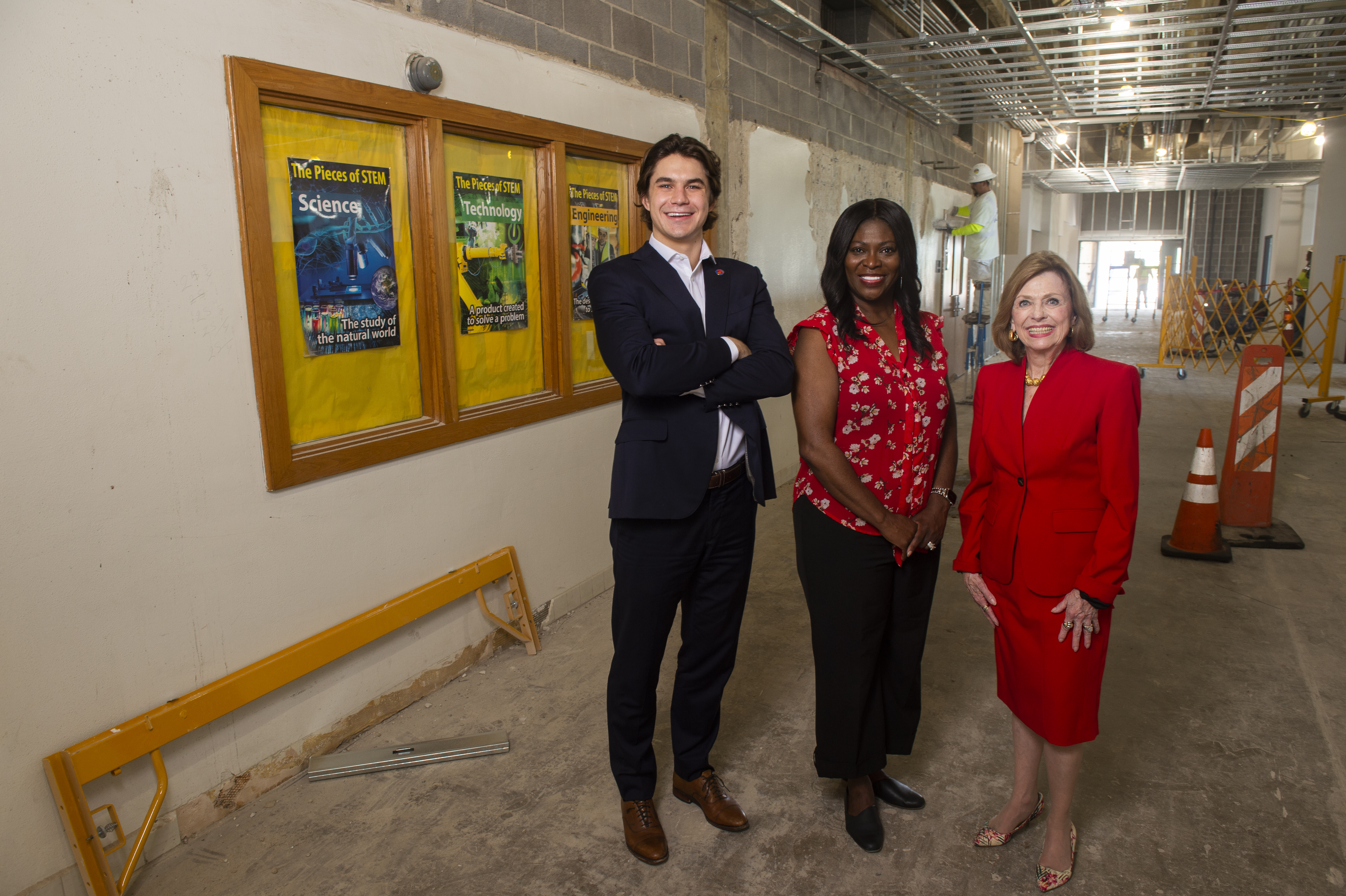 SMU Student Body President Austin Hickle, West Dallas STEM School Principal Marion Jackson and SMU Simmons School of Education and Human Development Dean Stephanie Knight tour construction of STEM Alley at the West Dallas STEM School. By fall 2022, students will experience hands-on learning here in robotics, theater tech, STEM labs and a maker space. In 2026, when they graduate from high school, West Dallas STEM School graduates will be eligible to apply for a new SMU scholarship just for them endowed by the 2021-22 SMU Student Senate. The Pre-K- 8 school is a partnership between Toyota, SMU and the Dallas ISD.

“This is SMU students’ chance to extend a helping hand to other students,” Hickle says.

The scholarship for students who attend Dallas ISD’s West Dallas STEM School will first be available in 2026. That’s when the current group of eighth-graders at the newly opened school will apply to college. The PK-8 school is a collaboration between Dallas ISD, Toyota USA Foundation and SMU’s Simmons School of Education and Human Development, designed to bring project-based STEM education to students in West Dallas, where incomes and opportunity tend to lag behind other areas of the city.

In addition to the $50,000 earmarked to begin the West Dallas STEM School scholarship, the Senate also voted to award $100,000 to the Rotunda Scholars Program, a program already in place designed to help first-year students achieve early success at SMU by promoting academic achievement, leadership and personal excellence. Members of the program are often first-generation college students attending SMU on merit and financial-need scholarships. The Student Senate Rotunda Scholars Grant Award provides funds for expenses often not provided by other scholarships, such as books, computers, membership fees for honorary organizations and study abroad.
Hickle has been involved with the West Dallas STEM School since he was a first-year student and scheduled an appointment with Stephanie Knight, dean of SMU’s Simmons School of Education and Human Development, to discuss education equity. In turn, Knight shared her own passion, the West Dallas STEM School. After discussing their shared goals, Knight introduced Hickle to the school planning leadership team and college and career readiness committee where he learned first-hand the school’s impact.

“I became determined to enhance the opportunities for students from lower-income families and build on the growing connections between the STEM School and SMU,” Hickle says. “When I brought the West Dallas STEM School scholarship proposal to the Student Senate for vote, every elected student senator voted in favor of using student fees to support underrepresented Dallas students. The Student Senate pledged $50,000 a year to build a scholarship fund for future graduates of the West Dallas STEM School.”

Hickle graduates from SMU in May, 2022. He earned a Fulbright grant to teach students in South Korea in 2023-2024, then he plans to return to the U.S. and use his Truman Scholarship to earn a law degree and a Master’s degree in education.

“Under the capable guidance of future SMU student leaders who will follow me, I hope these scholarship funds are only the beginning of a legacy of improving equity and creating a school that supports all students,” Hickle says.

His support for student scholarships is in good hands with the next SMU student body president. In addition to other leadership honors, incoming SMU Student Body President Sydney Castle is an SMU Rotunda Scholar.

About SMU
SMU (Southern Methodist University) is the nationally ranked global research university in the dynamic city of Dallas. SMU’s alumni, faculty and over 12,000 students in eight degree-granting schools demonstrate an entrepreneurial spirit as they lead change in their professions, communities and the world.