DALLAS (SMU) – SMU presented the honorary Doctor of Humane Letters degree to longtime Dallas leader Anita N. Martinez at SMU’s May 14 commencement ceremonies, honoring her dedication to enriching the civic and cultural life of the city.

“Receiving this honor was a crowning achievement for her and our family,” said Martinez’ son, Al Martinez.

In 1969, Martinez became the first Mexican-American woman elected to the Dallas City Council, as well as the first elected to any major city council, but her passion for her community began much earlier.  As a 14-year-old, the fifth-generation Texan led her first campaign, collecting signatures for the pavement of Pearl Street in the Dallas community known as “Little Mexico.” 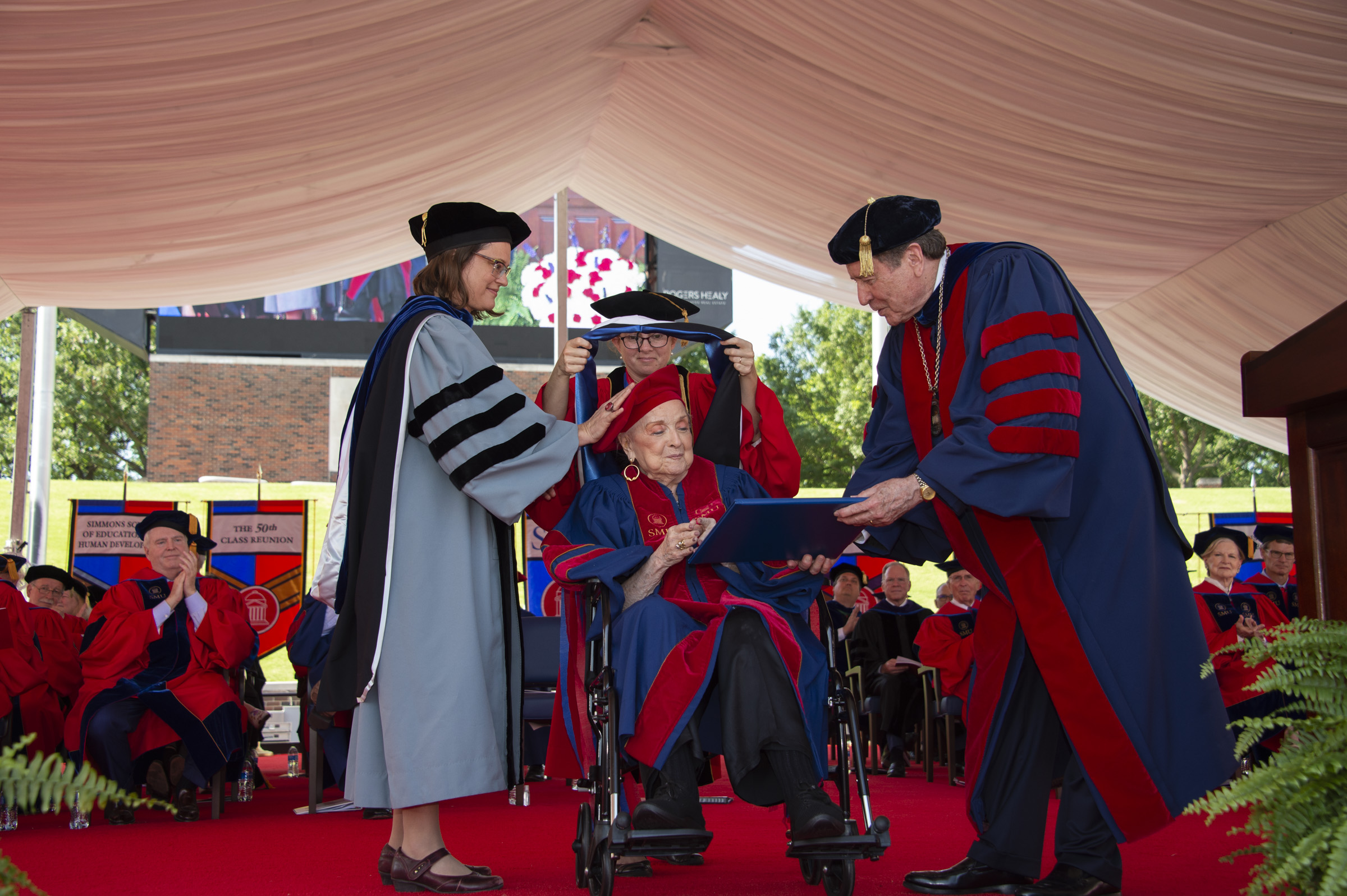 She was the first member of her family to graduate from high school and attended courses at SMU’s Dallas College, a downtown extension program popular in the 1930-40s.

Later, as councilwoman, the now 96-year-old led campaigns for a new recreation center in West Dallas, now named in her honor, and for the founding of the Los Barrios Unidos Community Clinic. In addition, her leadership secured the funding for a much-needed renovation of Pike Park in West Dallas.

“She is a collaborator,” said Al Martinez. “As the only woman on the City Council, she was able to get the other members to work with her for the best for Dallas. She used her political muscle and voice to elevate people who had none.”

After two terms on the Dallas City Council, Martinez chose to improve her community through the performing arts, establishing the Anita N. Martinez Ballet Folkorico in 1975 as way to educate Hispanic youth on the significance of their culture through traditional cultural dances from regions in Mexico, Central America and the American Southwest.

As a little girl growing up in Dallas’ “Little Mexico,” Anita Martinez took dance and theater classes from a neighbor, her son said.  When neighbors applauded after she and her friends performed on her front porch, she remembered how special she felt. Her goal in creating her own ballet folklorico program was to bring that same confidence to other children.

“About a year after students begin dancing, they become comfortable with themselves,” Al Martinez said. “They learn that they matter. It’s a game-changer for the students and their families.

At Anita N. Martinez Ballet Folklorico, training and performances reflect history, geography, physical fitness and culture. The program, which continues to thrive, also offers classes for those age three to adult, hosts a performance company and presents educational performances for young audiences that have been seen by more than one million schoolchildren in the past 10 years. Dancers from Anita N. Martinez Ballet Folklorico regularly perform in SMU’s annual Homecoming Parade.

Anita Martinez’ papers are part of SMU’s DeGolyer Library Archives of Women of the Southwest.

The Honorary Degree Committee of the SMU Faculty Senate recommends nominees for the honor each year. The Faculty Senate then votes and forwards the nominee(s) to the University president for review and final approval by the SMU Board of Trustees. SMU’s first honorary degree was presented in 1918.