SMU is investing $11.5 million in hardware, software and training to strengthen the University AI infrastructure with an NVIDIA DGX SuperPOD™, bringing world-leading AI supercomputing capabilities to Dallas. The collaboration will give SMU faculty, students and research partners the ability to integrate sophisticated AI technology across a wide array of research disciplines, ranging from computational biology to human performance, from national defense to digital humanities.

“This partnership will put us in the fast lane for artificial intelligence,” said SMU President R. Gerald Turner. “Research universities like ours have an obligation to actively engage in the development and application of AI for societal good, and this partnership gives us the tools to do it.”

Increasing SMU’s computing capability also will provide real benefits for North Texas, as the region continues its growth as a technology hub.

“Dallas has long been a hub for innovation, and this tremendous increase in supercomputing brainpower at SMU can be a powerful tool for our city,” said Mayor Eric Johnson. “Through research collaborations built on SMU’s capabilities in artificial intelligence, we have the potential to boost our city’s booming economy, improve our workforce, and learn to solve major challenges that we face.” 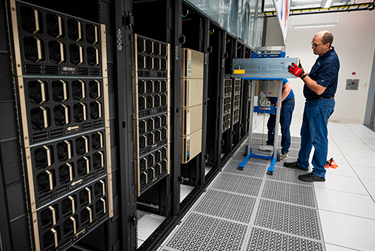 As a recent report by the Brookings Institution pointed out, while AI activity is still highly concentrated in the San Francisco Bay Area and 13 early adopter metro areas, other metro areas have staked a major claim in the AI economy via federal research and development funding through their community’s universities. Brookings lists the Dallas-Fort Worth region among “potential” AI adoption centers, noting many are home to Fortune 500 companies that could become greater players in AI.

“High-performance computing is transforming the world by enabling researchers to tackle some of humanity’s most complex problems,” said Cheryl Martin, director of higher education and research at NVIDIA. “NVIDIA’s collaboration with world-class institutions such as SMU is equipping the next generation of scientists with the extreme performance to supercharge AI and supercomputing exploration and expand humanity’s understanding of the universe.”

Machine learning uses statistics to find patterns in large data sets. AI is a broader concept, equipping computer systems to perform functions normally requiring human intelligence. Scientists outlined the concept of artificial intelligence during the second half of the 20th century, but it took years for technology to develop that could deliver the power and speed to bring AI to reality. Two decades ago, NVIDIA invented the graphics processing unit (GPU), a specialized circuit originally designed to speed the generation of photorealistic images for video games. Because GPUs can process large amounts of data at the same time, their invention ignited the modern era of AI and machine learning.

SMU will increase the power and reach of its existing supercomputing system, priming it for more powerful AI applications, by incorporating a NVIDIA DGX SuperPOD connected with the NVIDIA Quantum InfiniBand networking platform into its data center and producing a theoretical 100 petaflops of computing power. A petaflop is the critical measure of power and speed in the world of supercomputing – a quadrillion operations per second. This dramatic increase in SMU’s already impressive supercomputing network will equip it to perform a blistering 100 quadrillion operations per second.

The collaboration between SMU and NVIDIA is a big step in a journey that began a decade ago with the University’s pursuit and acquisition of its first high-speed computing cluster. SMU acquired that initial system to enable University researchers to analyze data from CERN, which led to SMU’s role in identifying the probability of the Higgs boson – the so-called “God Particle.”

The Office of Information Technology (OIT) and the SMU Center for Research Computing collaborate in providing the computational and digital data infrastructure necessary to support research endeavors of SMU’s faculty, research staff and students. Students with a faculty sponsor are allowed individual access to the supercomputing system. 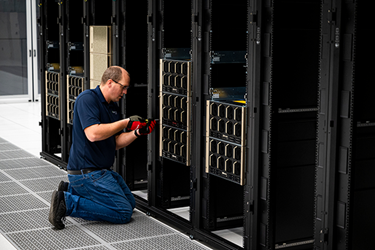 “This partnership is a significant boost to our plans for high-performance computing prowess in the academic realm and the expansion of data science across the SMU curriculum,” said Elizabeth Loboa, SMU provost and vice president for Academic Affairs. “This will be of great value to our faculty and students who are already using accelerated computing in areas such as drug discovery, computational chemistry, virtualization, astrophysics and engineering.”

The leap in computing capability is going to be pivotal, Loboa said, as the University increases AI-dependent research to address significant national and international issues. SMU is currently recruiting new faculty across multiple disciplines to join existing faculty in research groups that will study:

The enhanced high-performance computing power will also support the University’s commitment to reaching within a decade the top R1 research status as designated by the Carnegie Classification of Institutions of Higher Education. SMU currently holds Carnegie classification R2 status, having advanced past 55 other universities since 2005.

The new NVIDIA SuperPOD is being installed at SMU by Houston-based Mark III Systems.

SMU is the nationally ranked global research university in the dynamic city of Dallas.  SMU’s alumni, faculty and more than 12,000 students in eight degree-granting schools demonstrate an entrepreneurial spirit as they lead change in their professions, communities and the world.