DALLAS (SMU) – SMU mourns the loss of educator, trailblazer and University leader Ruth Prouse Morgan who served as a professor of political science at SMU for 20 years and as the University’s first female provost from 1986–1993. She passed away on Monday, March 8, 2021.

“Ruth Morgan left an indelible mark on SMU. As a beloved professor and, later, as SMU’s first female provost, she paved the way for women in institutions of higher education across the country,” said SMU President R. Gerald Turner. “She helped shape SMU’s stellar academics, leading our expert faculty and increasing SMU’s reputation for excellence. She also gave her time and energies to creating an environment of equity and inclusivity. We are so grateful for all she contributed to our community, and SMU will miss her passion, charisma and intelligence.”

She came to SMU as an assistant professor of political science and served in that role from 1966–1970; she was promoted to full professor in 1974. Over the course of her career, she taught a wide range of classes, including ones focused on the American presidency and modern political thought. Twice named SMU’s outstanding professor for the year, Morgan was admired by students and colleagues alike. She was elected the first female president of SMU’s Faculty Senate in 1970, and joined the provost’s office in 1970, where she served first as assistant provost and later as associate provost. In 1986, she was named SMU’s first female provost, a role in which she broke new ground by devising strategies for equitable pay in faculty salaries for men and women, and for the fair treatment of women in promotion and tenure policies – including the introduction of paid maternity leave. She evolved the school’s academic program by increasing requirements for science, language and writing. She also established interdisciplinary programs in international and ethnic studies, as well as doctorate programs in both psychology and physics. She served as provost and vice president for Academic Affairs until 1993.

“Pioneers like Ruth Morgan led the way in higher education administration, acting as a role model to the women who followed in her footsteps. Her efforts at SMU to improve academic offerings and pursue equality have impacted every Mustang who has worked, studied or taught on the Hilltop,” said SMU Provost Elizabeth G. Loboa. “I am thankful for all Ruth contributed to the University. She truly has changed it for the better, and generations of Mustang will benefit from her service for years to come.” 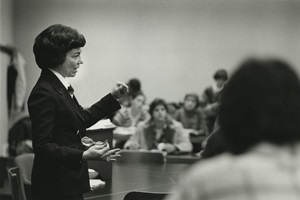 In addition to her work as a professor and provost, Morgan also led initiatives to lift up women’s voices in the library and across campus. In 1994, she helped establish the Archives of Women of the Southwest. Housed in SMU’s DeGolyer Library’s special collections, the archives aim to document the historical experience of women in the Southwest, with special emphasis on Dallas and North Texas, as well as a regional focus that includes Texas, Louisiana, Arkansas, Oklahoma, New Mexico, Colorado, Arizona and the Spanish borderlands. Morgan also helped found SMU’s annual Women’s Symposium. To enrich the lives of young scholars, she created the Ruth P. Morgan Research Travel Grant, which is awarded to a researcher each year by the DeGolyer Library to encourage work in women’s history or political history.

Her service to community reached beyond SMU. She was elected president of the Dallas Summit in 1992 and was a founding member, and, later, president, of Dallas Forum, a wing of the International Women’s Forum. Her published works include The President and Civil Rights: Policy-Making by Executive Order, 1987, and Governance by Decree: The Impact of the Voting Rights Act in Dallas, 2004. Her academic and personal papers are housed in SMU’s DeGolyer Library’s special collections, enriching the history and research offerings of the University.

Morgan was preceded in death by her husband Vernon E. Morgan ’72, who passed away in 2011. They were married for 56 years. She is survived by her son Glenn E. Morgan and his wife Margaret Morgan, grandchildren Erin Elizabeth Morgan and John Zachary Morgan and great-granddaughter Gwyneth Morgan.

Ruth Morgan's oral history is one of 62 digitized and available for viewing in the University's Video Archive Series, created by SMU libraries in 2000 to capture the extensive knowledge base of SMU retirees.