DALLAS (SMU) – The discovery of the first juvenile dromaeosaurid lower jaw bone on the North Slope of Alaska supports a growing theory that some Cretaceous Arctic dinosaurs did not migrate with the seasons but were year-round residents, according to new research by SMU paleontologist Anthony Fiorillo. The research was published today in PLOS ONE. Prior to this find, only tiny dromaeosaurid teeth have been discovered in this region.

Dromaeosaurids are a group of predatory dinosaurs closely related to birds. Researchers have tended to believe that this group of dinosaurs migrated through the area but did not make their homes there. 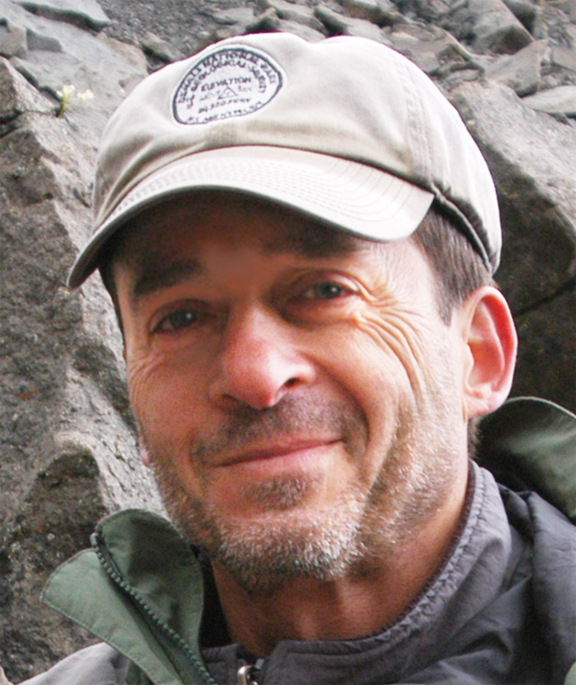 “This is the first physical evidence that 70 million years ago, some dromaeosaurid nested in the area,” Fiorillo says. “To withstand the rigors of migration, modern caribou need to be at least 80 percent of their adult length. Grown dromaeosaurids ranged from 6 to 9 feet. This baby would have been the size of a small puppy, much too young to migrate,” he says.

Dromaeosaurids’ small and delicate bones don’t preserve well in the fossil record, which makes this discovery of a baby’s jawbone particularly unique, Fiorillo says. But don’t be fooled by their fine-boned stature. Velociraptors, the “Jurassic Park” dinosaurs that terrorized the kids in the famed kitchen scene, are members of this same sharp-toothed family, he says.

The partial jaw fossil that Fiorillo and colleagues studied, with one black erupted tooth, was found on a bank of the Colville River near the Arctic Ocean, about 250 miles north of the Arctic Circle. The location is part of the Prince Creek Formation, which existed as a coastal plain in the Late Cretaceous period with a climate similar to 21st century Seattle or Portland, Oregon. Trees, ferns and mosses flourished there, along with plant-eating dinosaurs, small mammals and the predators that ate them. Now the formation is home to the largest collection of polar dinosaurs in the world. 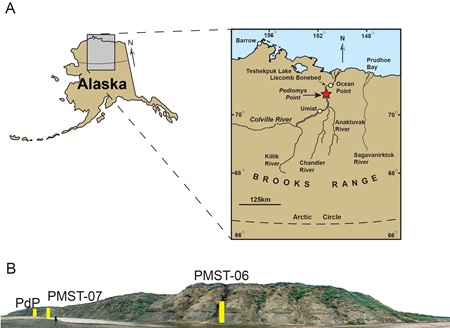 Paleontologists have long thought the Prince Creek Formation was once a dinosaur highway, with migrating hadrosaurs, ceratopsians and theropods crossing a land bridge between Asia and North America and dispersing across the continent. The discovery of this tiny portion of the tip of a dinosaur chick’s jawbone helps prove that some dinosaurs made their home there. 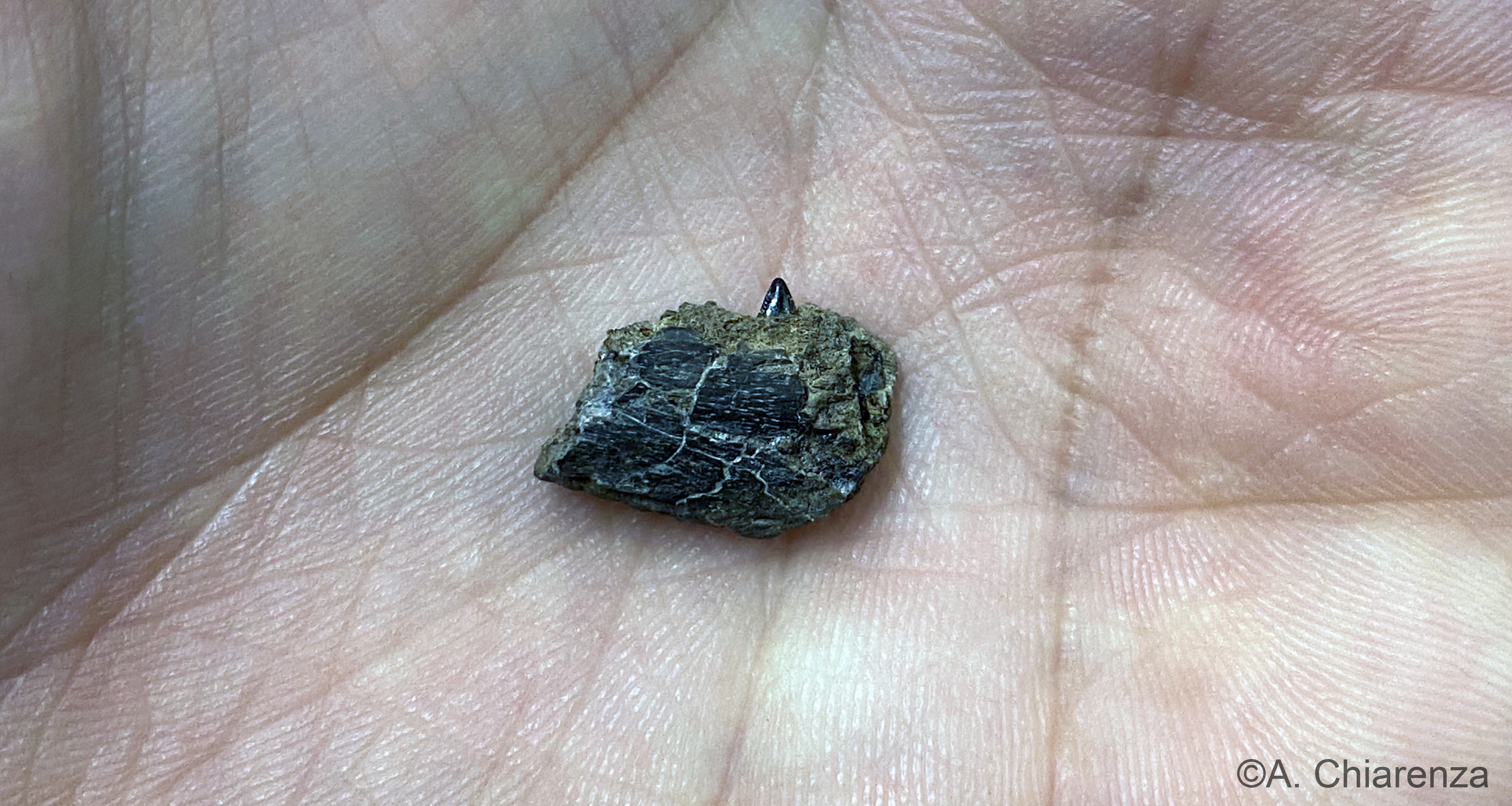 One tiny tooth erupts from the jaw of the first juvenile dromaeosaurid fossil found on the North Slope of Alaska. (download image)

For the last 22 years, Fiorillo has spent his summer camping on the riverbanks and mountainsides of Alaska, searching for fossils. But COVID-19 grounded the planned 2020 five-person expedition to Aniakchak National Monument, the most remote and least visited national park unit in the country. The team was planning to expand on its earlier successes studying dinosaur tracks, published last year in the journal PLOS ONE.

When Fiorillo first traveled to Alaska in 1998, dinosaur fossils had only been found in two areas of the state. The North Slope was home to just one kind of exploration – oil.

“When you looked at the geologic map of the area, the age of the rock was just the right age to find dinosaur fossils,” he said. “Researching there sparked my intellectual curiosity and sense of adventure.”

And like Fiorillos’ muse, Arctic Village author Robert Marshall, “Blank spaces on maps have always fascinated me,” he says. For Fiorillo, there is no sweeter sound than the fading roar of the fixed wing plane that has deposited his team, gear and provisions on an airstrip far from any road or civilization.

“It’s hard to explain, it’s liberating and freeing being completely on your own the way we are,” he says.

The isolation also comes with challenges. Fiorillo and his teams have experienced floods, earthquakes, landslides, snowstorms and once, a bear that tried to get into his tent. In the early years, their only communication to the outside world was an air-to-ground radio that connected to a commercial plane passing overhead, of which there were few.

Fiorillo’s intellectual curiosity and love of adventure have paid off. The map of Alaskan dinosaur fossils is no longer blank. And after 22 years of Arctic research, Fiorillo has found that dinosaur fossils there are so prevalent, “You can’t walk 10 steps without tripping over one.”

Of the four Alaskan dinosaurs with names, Fiorillo has named two of them, a right given to the person who discovers the first of a species. He’s the author of more than 150 scientific papers, abstracts and reviews, a collaborator on four books and author of Alaska Dinosaurs: An Ancient Arctic World, published in 2018.

Visitors to Dallas’ acclaimed natural history and science museum, the Perot Museum of Nature and Science, are well aware of his work, he played a key role in the museum’s development, serving as vice president of research and chief curator since 2014. He was curator of Earth sciences there from 1999-2014.

Fiorillo is now curator emeritus at the Perot Museum, and adjunct associate professor in the Huffington Earth Sciences department at SMU. Grounded this year by the coronavirus, he is ready to go back to Alaska.

“Very little was known about Alaskan dinosaurs when I first started going there,” he says. “We’ve answered many academic questions, but we’ve raised even more new questions.”