A $5 million gift from Heather and Ray W. Washburne ’84 and family will create a new soccer and track stadium

DALLAS (SMU) – A $5 million commitment from Heather and Ray W. Washburne ’84 and family will enhance the student experience and elevate SMU’s competitiveness by establishing the Washburne Soccer and Track Stadium. The Washburne family and its investment in the new campus resource will be celebrated at the SMU vs. Memphis men’s basketball game on February 25 in Moody Coliseum.

Located on Ownby Drive between Ford Stadium and the Binkley Parking Center, the Washburne Soccer and Track Stadium will house SMU’s men’s and women’s soccer teams, along with the track and field and cross-country teams.

“The Washburne family’s gift will enable us to continue to offer the best opportunities, resources and facilities to help our students succeed in all their endeavors,” SMU President R. Gerald Turner said. “The new Washburne Soccer and Track Stadium will not only create a new home for our student-athletes on par with the achievements of their programs, but it also will provide another venue where fans from across our community can come together to support our Mustangs.” 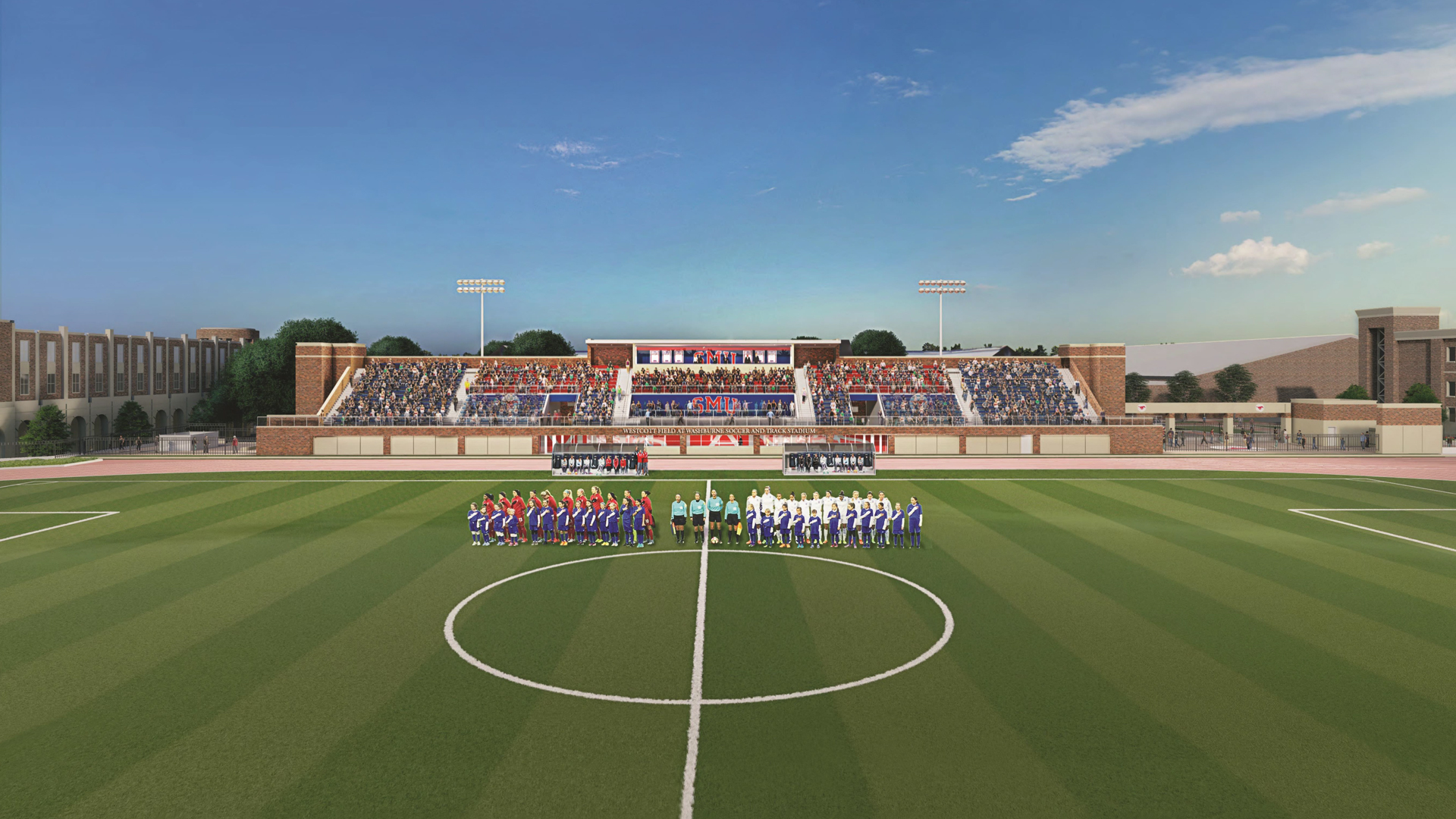 This gift builds on Ray Washburne’s longtime support for and volunteer leadership at SMU. Washburne received a bachelor’s degree in history from SMU and serves as CEO and president of Charter Holdings, a Dallas-based investment company involved in real estate, restaurants and diversified financial investments. At SMU, he has served as an adjunct professor in the Cox School of Business and on The Second Century Campaign Athletics Steering Committee, Mustang Club board, SMU Athletic Forum board, Cox School’s Folsom Institute for Real Estate advisory board and O’Neil Center for Global Markets and Freedom advisory board, John Goodwin Tower Center for Public Policy and International Affairs board of directors and Hegi Family Career Development Center committee. 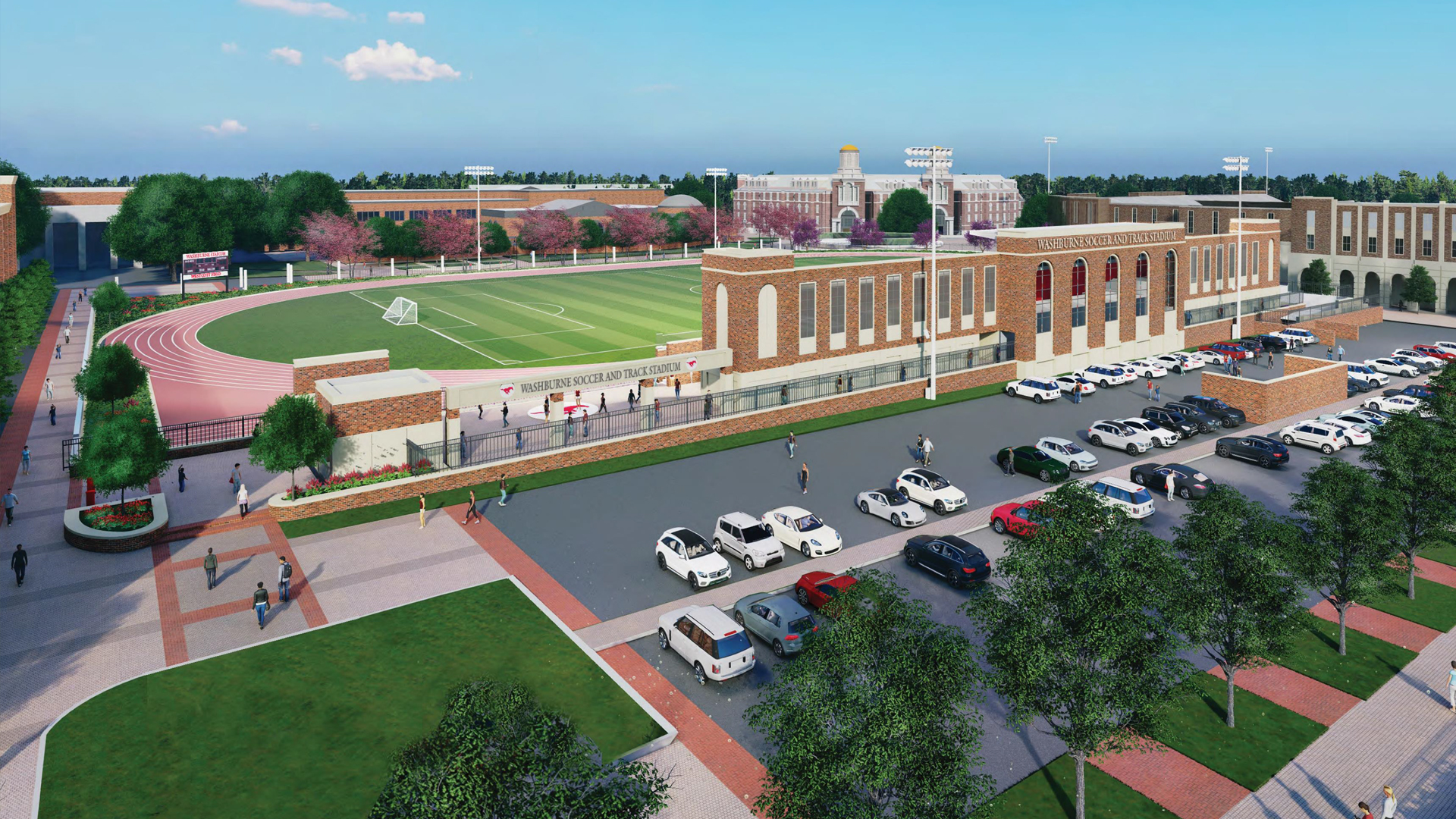 The Washburnes have three children. Their oldest son is an SMU sophomore, and their second son will enroll at SMU as a first-year student in fall 2020.

“My SMU experience still influences me today, and with the University’s growth and progress over the years, students will have even more avenues for taking full advantage of campus life,” Ray Washburne said. “My family and I are proud to contribute to a leadership pipeline that extends beyond the classroom to nurture the teamwork, discipline and skills needed for success in today’s dynamic environment.”

The Washburne Soccer and Track Stadium will stay true to the footprint of the current Westcott Field and the 400-meter outdoor track, which will be updated to meet the new facility’s standards. The new 2,577-capacity stadium will include a structure featuring locker rooms and a team meeting/conference room. In addition to complementing the central campus aesthetic, the stadium will welcome Mustang fans for home events. 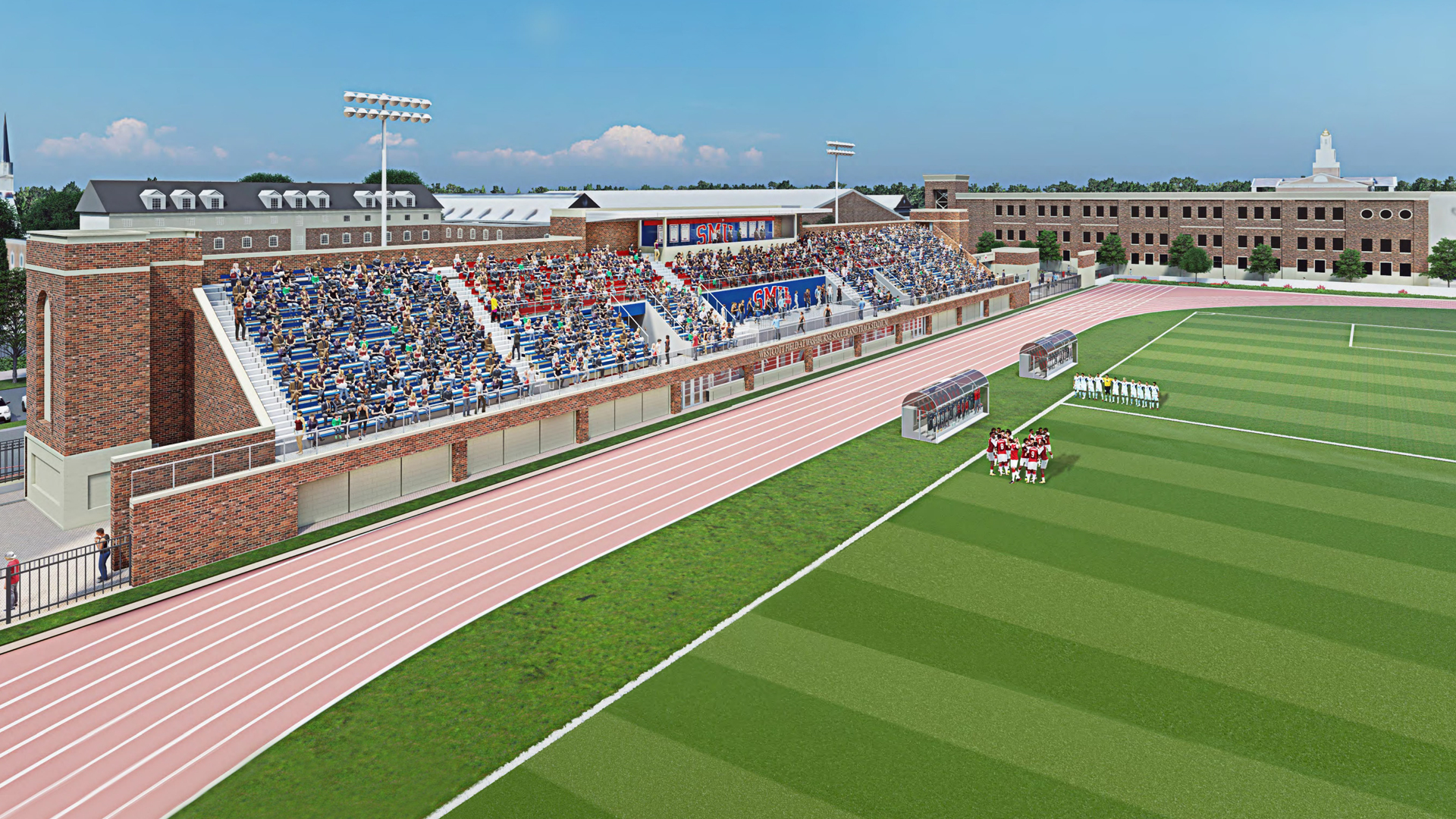 “The Washburnes’ passion for improving the future and the University’s strategic needs coalesce in their gift for the new stadium,” said SMU Vice President for Development and External Affairs Brad Cheves. “We are grateful for their inspiring generosity, which will forge experiences for our students that will stay with them forever and make an impact for generations to come.”

SMU men’s soccer has advanced to the NCAA tournament 33 times, finishing 30 times in the Top 25 over the past 44 seasons. The men’s squad has captured 20 regular-season conference championships and 10 conference tournament titles. Its 2019 senior class – one of the best in SMU history – went all the way to the Elite Eight quarterfinals in its NCAA Championship run, playing against the No. 1-ranked University of Virginia Cavaliers. For the men’s team, this marked the 13th Elite Eight appearance in program history. The men’s soccer players’ solid academic performance record includes 15 all-time academic All-American selections and 31 academic All-District honors. 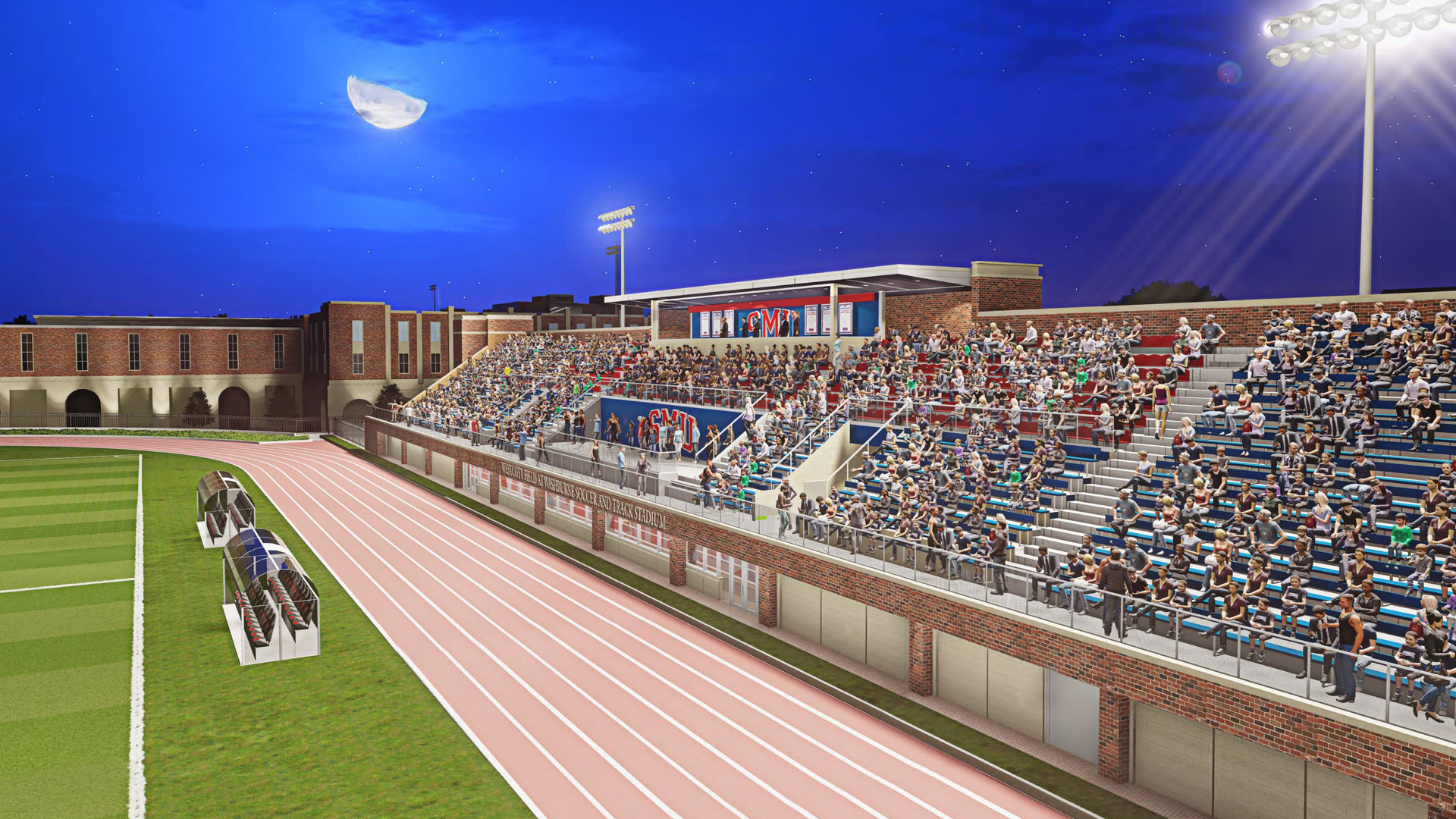 Combined accolades for SMU’s cross-country and track and field teams include 12 conference team titles and 18 NCAA Top 25 finishes. During program history, the teams have brought 154 conference champions, 92 All-American selections and 17 NCAA individual national champions. Last year, women’s cross-country had the highest team GPA (3.645) for all Mustang women’s sports. Twenty-one of their student-athletes were named to the 2018-19 Commissioner’s Honor Roll.

“The Washburne Soccer and Track Stadium will be a huge boost for the student-athletes involved in these high-performing programs as well as for their loyal fans,” Director of Athletics Rick Hart said. “This new stadium will enable us to recruit high-caliber student-athletes and builds on SMU’s commitment to competing at the highest level of intercollegiate athletics.”

A Dallas native, Ray W. Washburne earned a bachelor of arts degree in history from SMU in 1984. He is CEO and president of Charter Holdings, a Dallas-based investment company involved in real estate, restaurants and diversified financial investments. He is also the co-founder and co-owner of M Crowd Restaurant Group, which owns numerous restaurants, including the Mi Cocina and Katy Trail Ice House chains. He is also president and managing director of Highland Park Village. Washburne was named to the President’s Intelligence Advisory Board in 2019. From August 2017 to February 2019, he served as the president and chief executive officer of the Overseas Private Investment Corporation (OPIC), the United States government’s development finance institution. From 2000 to 2017, he served on the board of directors of Veritex Holdings, Inc. He also has served as an adjunct professor at SMU’s Cox School of Business. He is a member of the American Enterprise Institute, the Council on Foreign Relations and the advisory board for the United States Southern Command.

Heather Hill Washburne was also born and raised in Dallas. After graduating from Mary Baldwin University in Staunton, Virginia, she moved to Washington, D.C., where she worked for the Republican Governors Association. After returning to Dallas, she served as executive director of the Dallas County Republican Party and later started her own political fundraising company, Victory Associates. She has served on the boards of such organizations as Council for Life, Focus on the Family and St. Mark’s School of Texas, and was appointed in 2019 to serve on the board of the John F. Kennedy Center for the Performing Arts.