The Gerald J. Ford Hall for Research and Innovation ignites the future of research and education at SMU

Dallas (SMU) – SMU dedicated the Gerald J. Ford Hall for Research and Innovation on December 4, 2020, a new 50,000-square-foot interdisciplinary research hub that will equip faculty, students and industry partners with tools and resources to collaborate, solve complex problems and power new enterprises in the digital world of today and tomorrow. Gerald J. Ford ’66, ’69; his wife, Kelli O. Ford; and The Gerald J. Ford Family Foundation provided the lead gift for Ford Hall in 2013. The new facility expands the University’s use of high-performance computing for interdisciplinary collaborations and will help SMU attract greater levels of external research funding. As digital explorers, both undergraduate and graduate students will work alongside faculty and industry professionals in this new data-driven nerve center.

The new facility is located on SMU’s main campus at the corner of McFarlin Boulevard and Airline Road and serves as the home to the AT&T Center for Virtualization, the Dedman College Interdisciplinary Institute, high-performance computing and data science, and the innovative Visualization Lab. In addition, thanks to a significant gift from Linda Wertheimer Hart ’65 and Milledge (Mitch) A. Hart III, Ford Hall brings to SMU’s main campus the Hart eCenter, which includes SMU Guildhall, the graduate game design program. 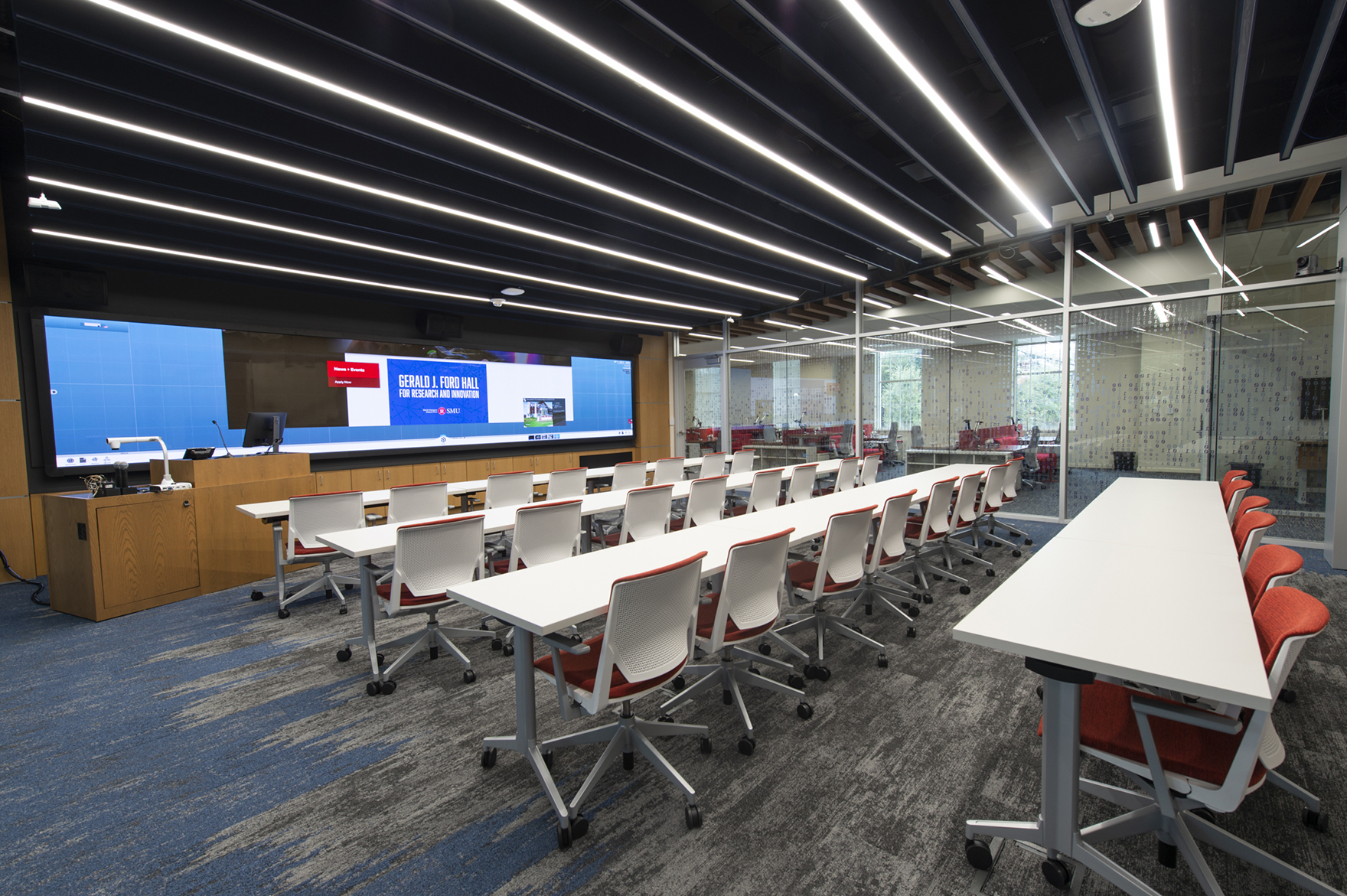 The multipurpose, flexible gathering space on the first floor offers high-performance visualization capabilities to facilitate real-time interaction between researchers, students and collaborators. It will accommodate classes, presentations and competitions, and also will work as an auditorium for performances, hackathons and other events. 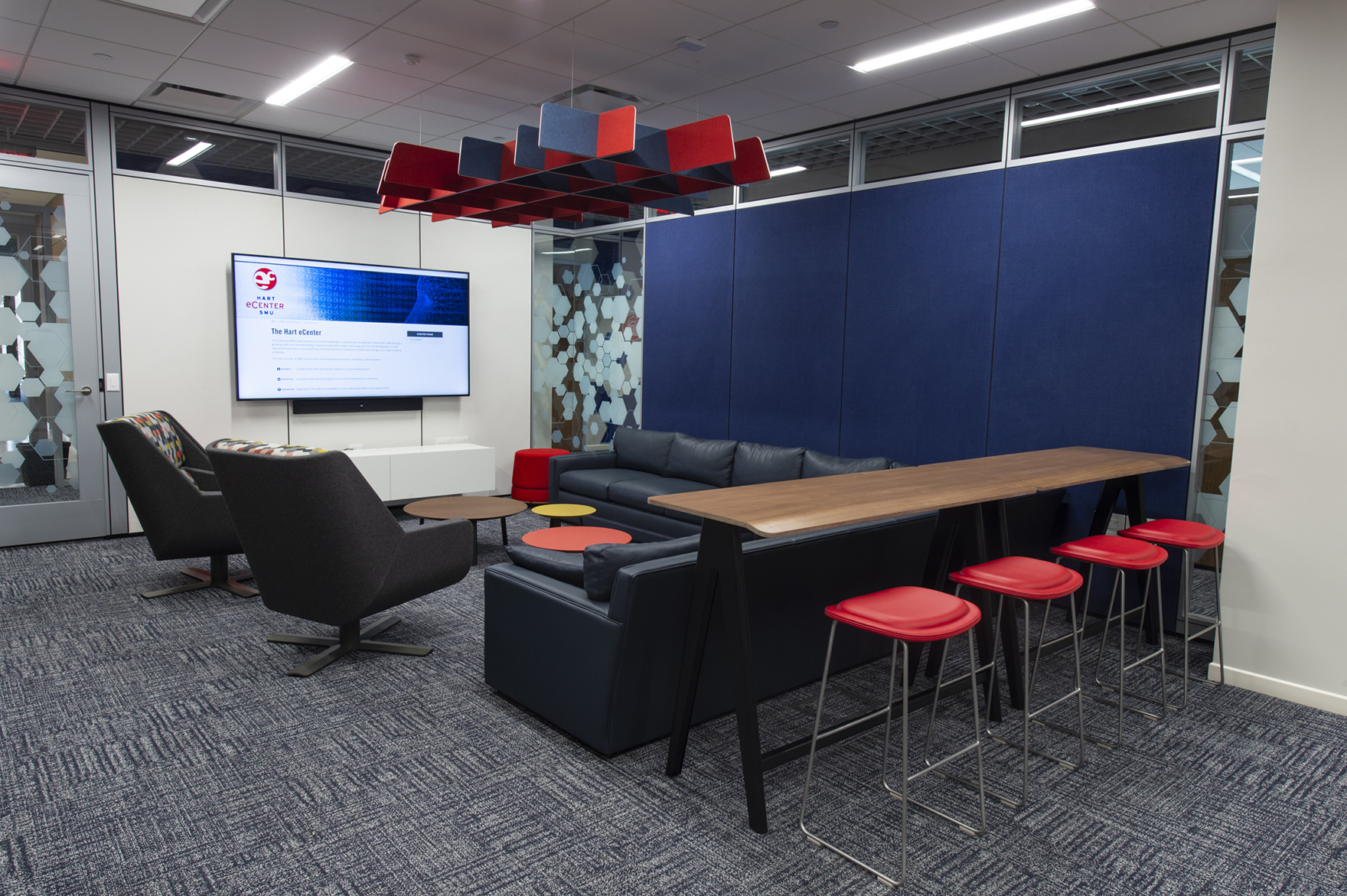 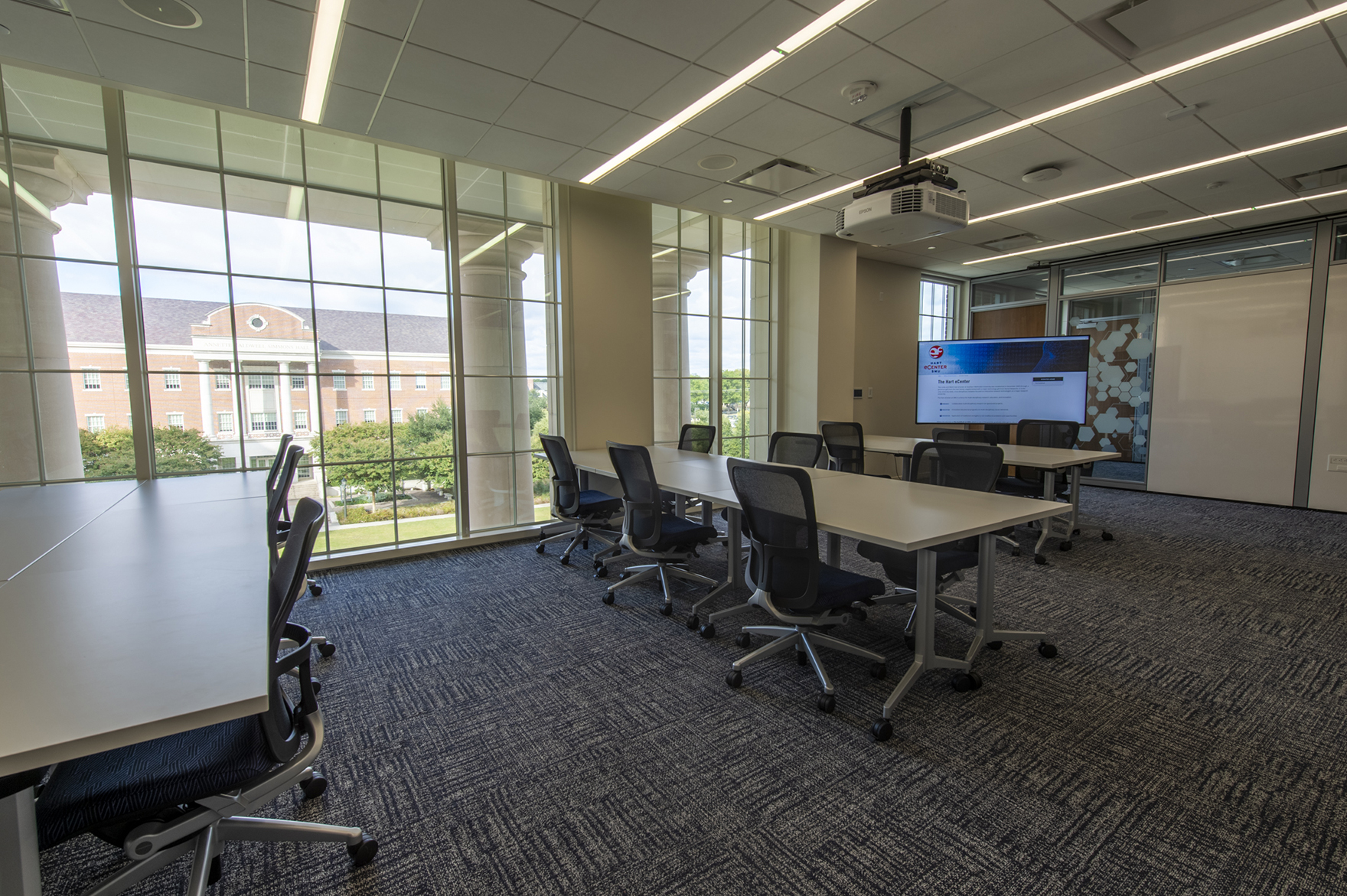 The versatile and changeable huddle spaces accommodate Guildhall projects and student and faculty research groups of all sizes. 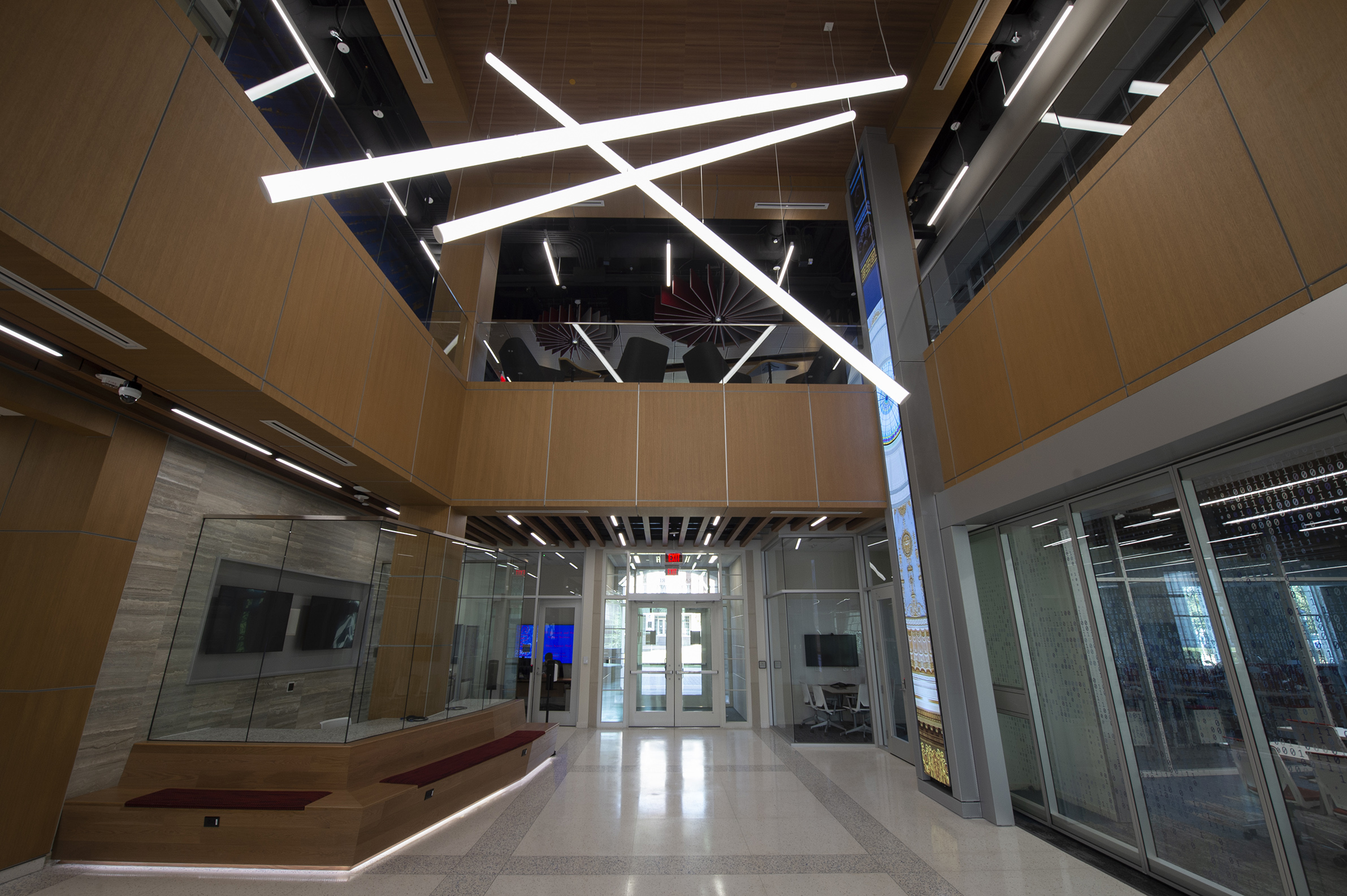 This high-traffic, high-use area serves as an entry point for visitors and a meetup space for building users. This flex area also can be used to extend the Visualization Lab footprint when needed. 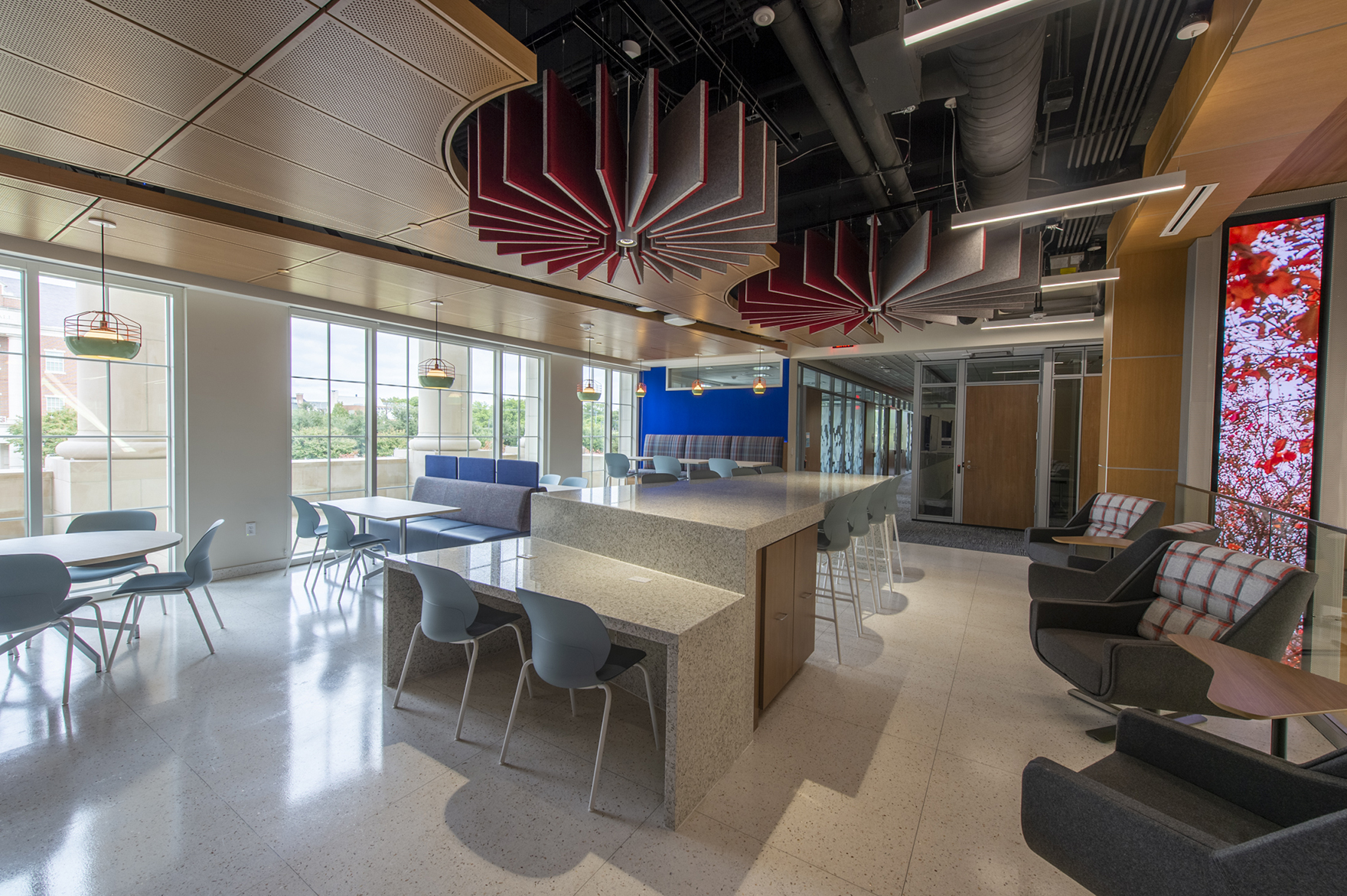 This space provides a welcoming place for students, faculty and staff to get refreshments and to informally collaborate with each other.

“The University is creating an exciting space for bold doers and collaborators. It’s the next step in SMU’s ascendancy as a premier research and teaching university, and my family and I are honored to play a role in this process.” 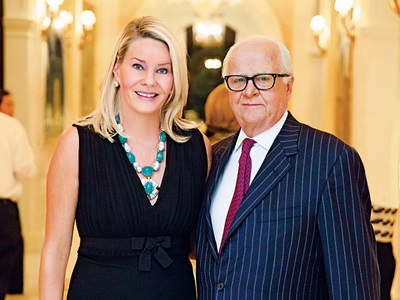 Gerald J. Ford is one of the nation’s most accomplished financial services executives. Over the past 40 years, he has acquired, managed and sold banking businesses and other financial services companies, including First United Bank Group; First Gibraltar Bank, FSB; Golden State Bancorp; and Pacific Capital Bancorp.

Ford currently serves as chair of Hilltop Holdings Inc. He is a managing member of and principal investor in Ford Financial Fund II, LP, a private equity firm. Ford also is the principal shareholder of First Acceptance Corporation, a nonstandard auto insurance company. He currently is the nonexecutive chair of the board of Freeport McMoRan Copper & Gold, Inc. Additionally, he is a director of Mechanics Bank.

Ford’s strong ties to SMU date from his student days. He earned a B.A. degree in economics from Dedman College in 1966 and a J.D. degree from what is now Dedman School of Law in 1969. He was honored with SMU’s Distinguished Alumni Award in 1995 and the Mustang Award in 1997, recognizing significant philanthropic contributions to the University.

He previously served as chair of SMU’s Board of Trustees and currently serves as a trustee and on the Campaign Leadership Council. He is a former member of the executive boards of Cox School of Business, Dedman College of Humanities and Sciences and Dedman School of Law, and of the board of directors of John Goodwin Tower Center for Public Policy and International Affairs.

An active community leader, Ford is an honorary trustee of Southwestern Medical Foundation. Beyond Dallas, he has served on the board of overseers of Cornell University’s Weill Medical College and its Graduate School of Medical Sciences.

In addition to providing the lead gift for Ford Hall in 2013, Ford established the Gerald J. Ford Research Fellows program at SMU in 2003, which annually honors outstanding faculty members with funding to support their research and creative endeavors. To date, 77 professors have been named Ford Research Fellows. And in 1997, he provided the lead gift for the Mustangs’ football stadium. Celebrating its 20th anniversary in 2020, Ford Stadium revitalized the campus experience for athletes, other students and supporters.

Kelli O. Ford co-owns the design firm Kirsten Kelli LLC, based in Dallas and Greenwich, Connecticut, and the Dallas retail home store, Madison. For more than 25 years, Ford and Kirsten Fitzgibbons, her sister and business partner, have served clients around the world. Their modern, classic style has been featured in Architectural Digest, Veranda, House Beautiful and other home decor publications.

Ford is a member of the Tate Distinguished Lecture Series board at SMU and a former member of the Meadows School of the Arts executive board. In Dallas, her volunteer service has included the Children’s Health Foundation Board; the board of visitors for UT Southwestern University Hospitals and Clinics; the board of trustees for The Hockaday School; and the George W. Bush Institute Women’s Initiative Advisory Council, at the invitation of former First Lady Laura Bush. Ford previously served on the Dallas Symphony Orchestra’s board of governors and was the 2012 chair of the Sweetheart Ball Committee. Beyond Dallas, she serves on the board of trustees for Greenwich Academy and on its advancement committee in Greenwich, Connecticut; the board of overseers of Cornell University’s Weill Medical College in New York City; and the board of directors of the Irvington Institute for Immunological Research in Irvington, New York.

In Dallas, Ford is involved with the Brook Hollow Golf Club and the Dallas Country Club. In New York, she is active with the Maidstone Club in East Hampton, the Meadow Club in Southampton, the New York Yacht Club in New York City, the Bathing Corporation of Southampton and Shinnecock Hills, both in Southampton. She also is a member of the Bel-Air Country Club in Los Angeles and the Lyford Cay Club in the Bahamas. She holds a bachelor’s degree in writing from St. Lawrence University, where she was a member of Kappa Kappa Gamma sorority.

The Fords have two daughters, Electra and Kelli, and he has four other children, Amy Ford Prestidge ’95, Jeremy Ford, Jordan Ford and Maegan Ford Nicholson.