“Edwin Cox’s contributions to and enthusiasm for this University and the Cox School of Business are invaluable. He was a tremendous presence and an inspiring influence for every person who crossed his path, and his work with and for his community has reached across generations and over great distances,” said SMU President R. Gerald Turner. “He will remain an example of tireless drive, selfless spirit and boundless energy to the students of Cox and of SMU for generations to come. He is missed, not only because of his determination to make the Cox School a globally recognized institution, but also because of his character and his unwavering commitment to the students of SMU and to the people of Dallas.”

Cox was the chair and CEO of the Edwin L. Cox Company, and the former chair of Cox Oil & Gas Inc., SEDCO Inc. and the Keebler Company. 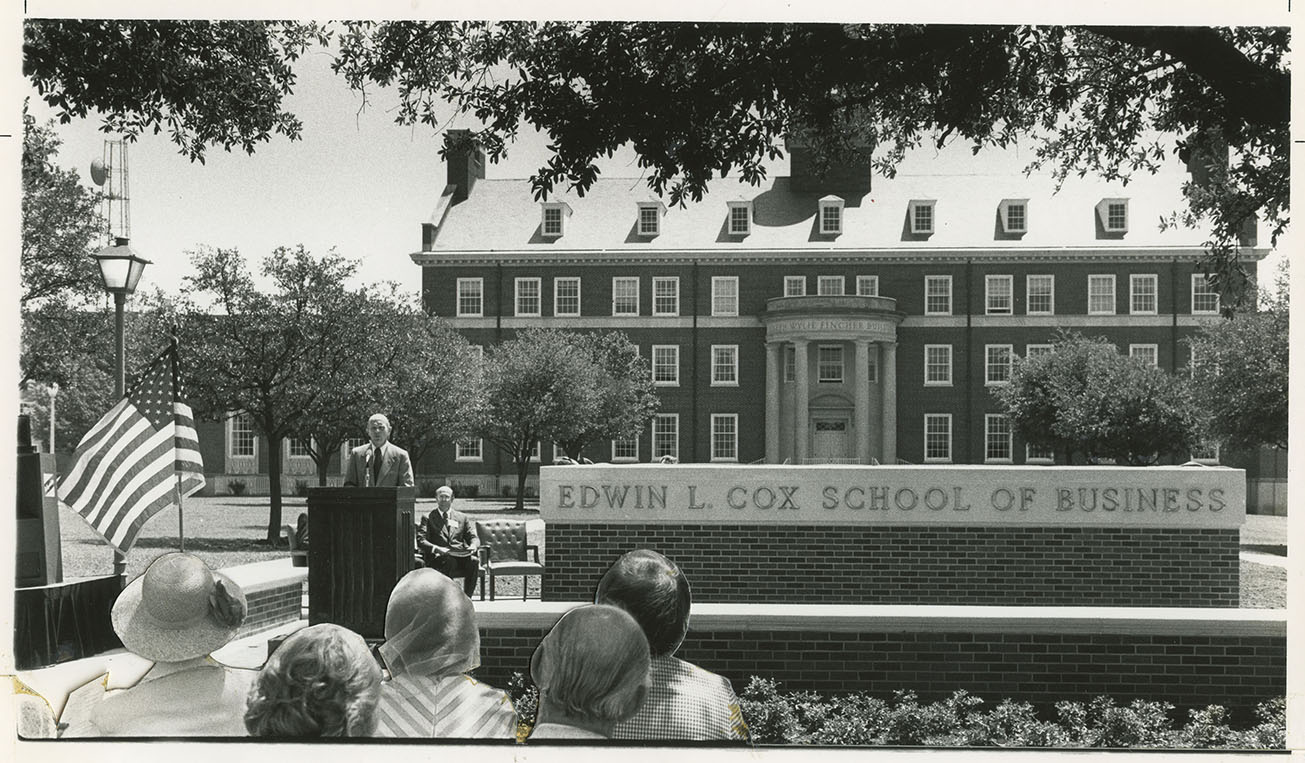 SMU’s Edwin L. Cox School of Business was renamed in his honor in 1978 in recognition of his generous support for and service to SMU for more than 50 years. Cox’s leadership and involvement helped elevate the quality of Cox school students, faculty, programs and relationships among the Dallas business community. Cox was a long-standing member of the Cox Executive Board and founded the Cox Distinguished M.B.A. Scholars Program, the Business Leadership Center for graduate students and the Edwin L. Cox BBA Leadership Institute for undergraduates. In 2007, Cox provided a challenge to establish the Edwin L. Cox BBA Scholars Program, which provides merit-based undergraduate scholarships.

In 2020, Cox was named the inaugural recipient of the Cox School of Business’ highest honor, the Cox Visionary Award. Fittingly named so during the school’s centennial year, Cox epitomized the purpose of the award: to recognize extraordinary contributions to the business community and exemplary leadership of the highest caliber. 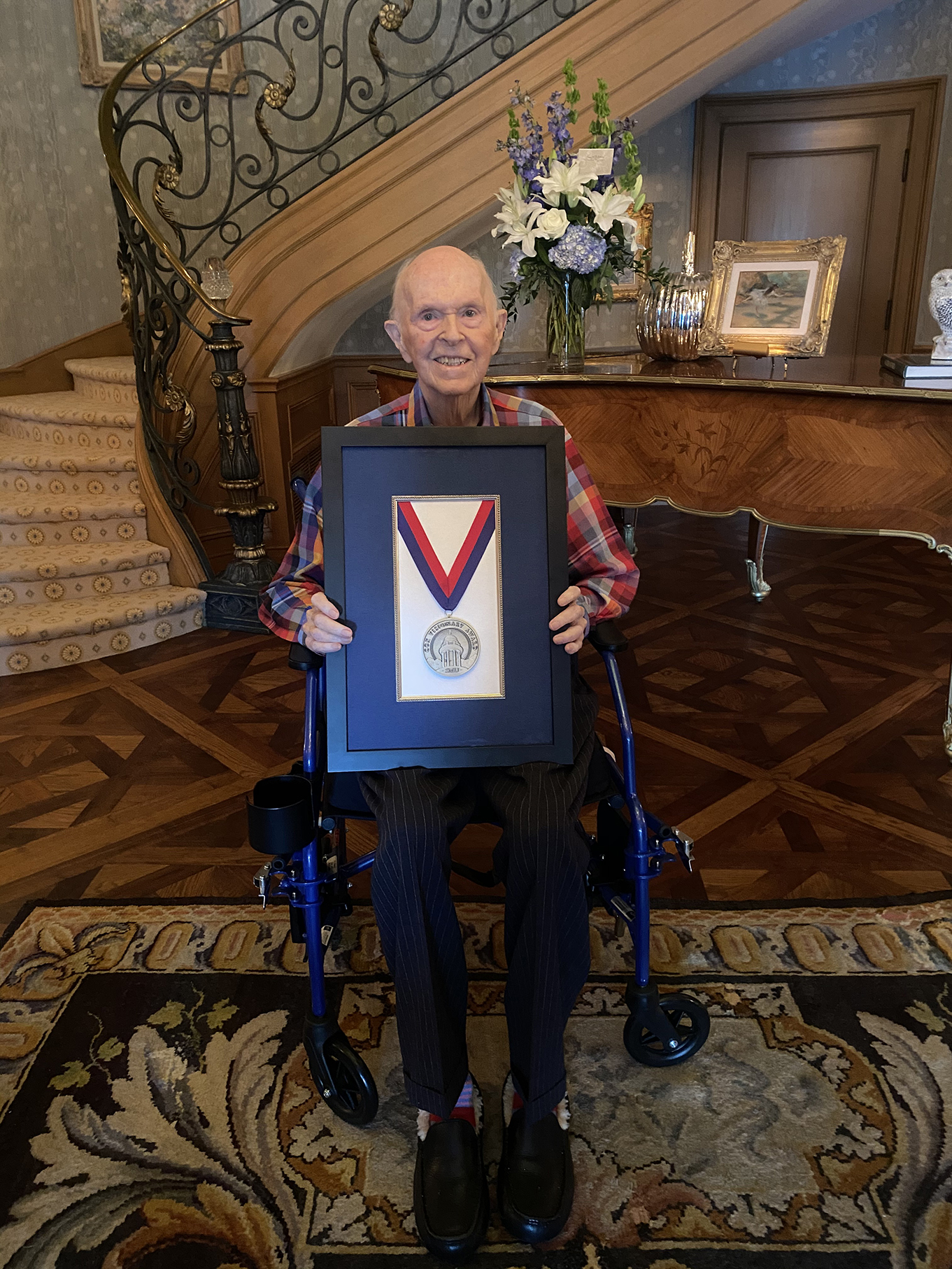 “Ed Cox was one of the first people I met when I came to campus to interview for my current position,” said Matthew B. Myers, dean, Cox School of Business and Tolleson Chair in Business Leadership. “Warmth, dignity and positivity emanated from him. His presence convinced me that I wanted to move to Dallas and wanted to work with him to take the Cox School to even greater heights. Ed Cox epitomized the can-do spirit that defines the Cox School, SMU and Dallas.” Myers became the ninth dean of the Cox School in 2017.

Cox served as an honorary chair of SMU’s Second Century Campaign Steering Committee during SMU Unbridled: The Second Century Campaign that concluded in 2015 after raising $1.15 billion. He was named a trustee emeritus in 1991, after service as a vice chair of SMU’s Board of Trustees from 1973 to 1976 and chair of SMU’s Board of Trustees from 1976 to 1987. He served on the University’s Board of Governors from 1969–1987, including a term as chair in 1974–76; and as chair of the national steering committee for SMU’s Design for the Third Generation capital campaign from 1975 to 1983. He also served on the Cox School of Business Capital Campaign Committee, the Maguire Energy Institute Advisory Board, the Meadows School of the Arts executive board and on the SMU Foundation for Business Administration. 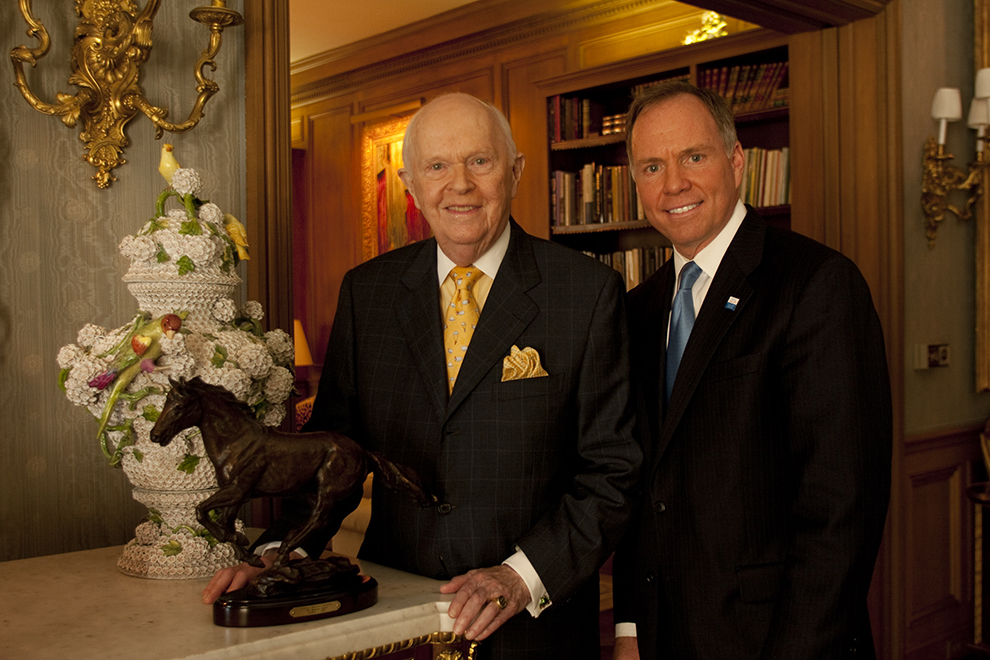 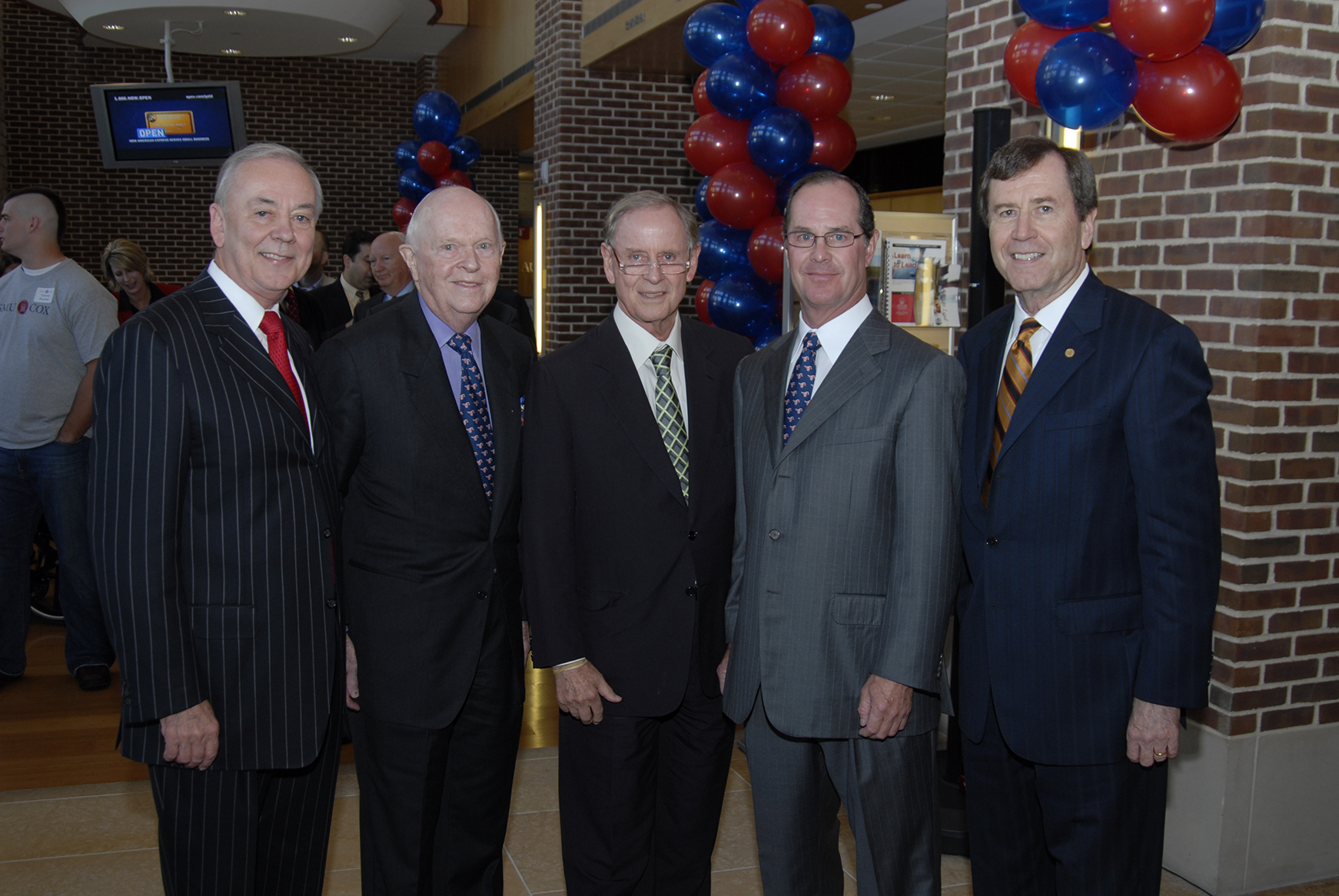 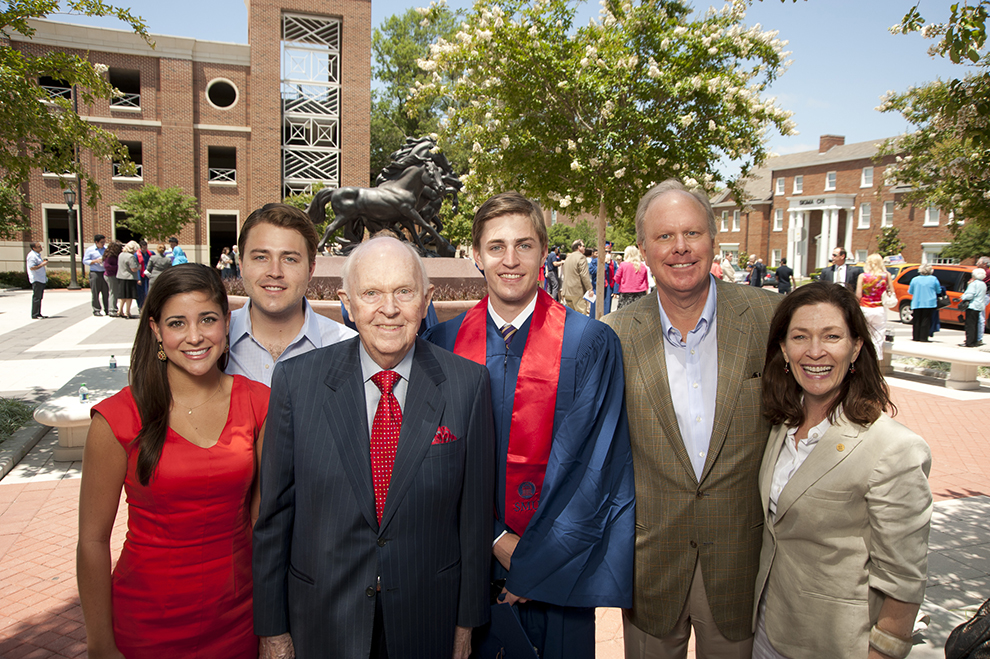 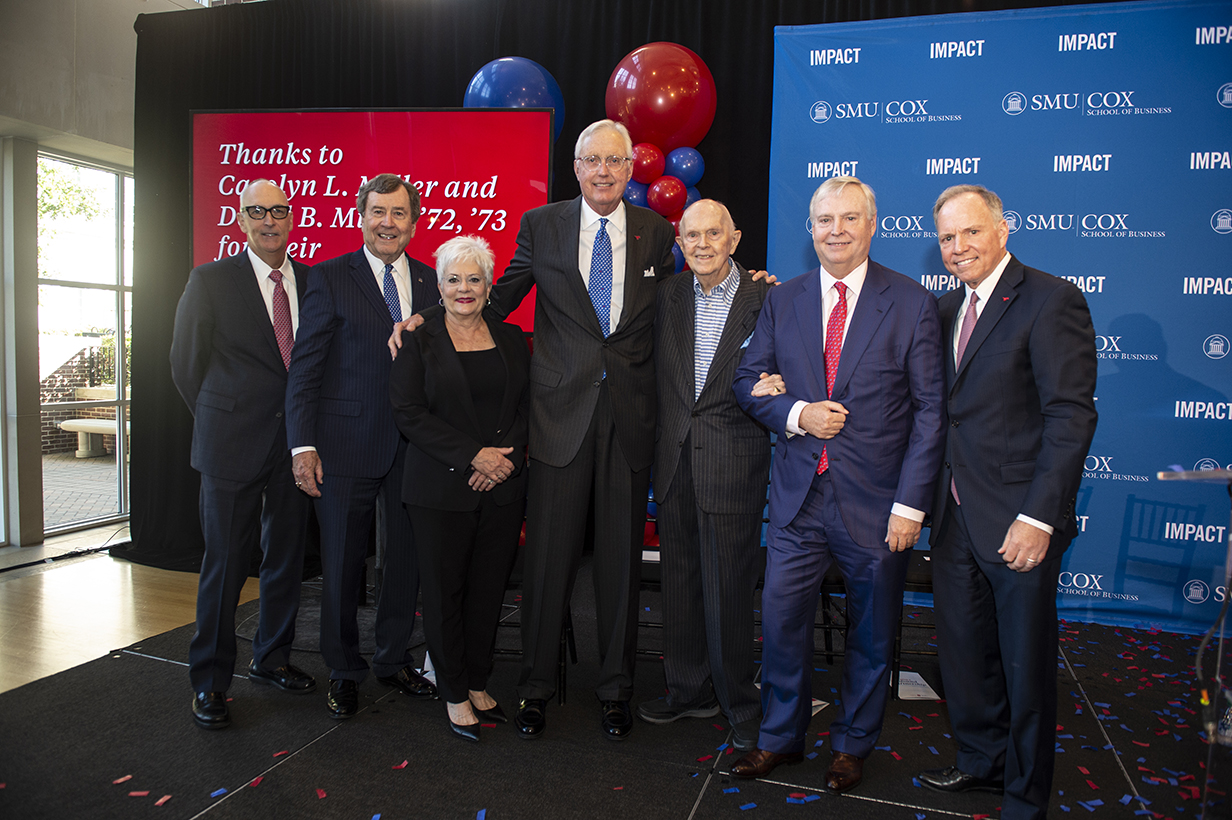 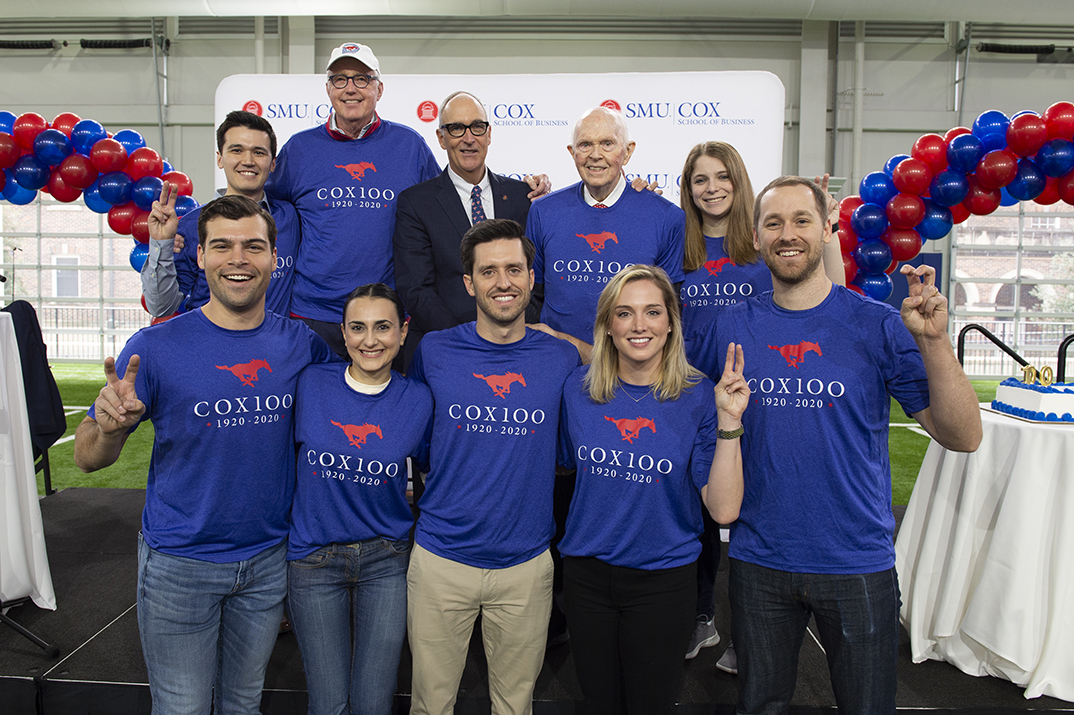 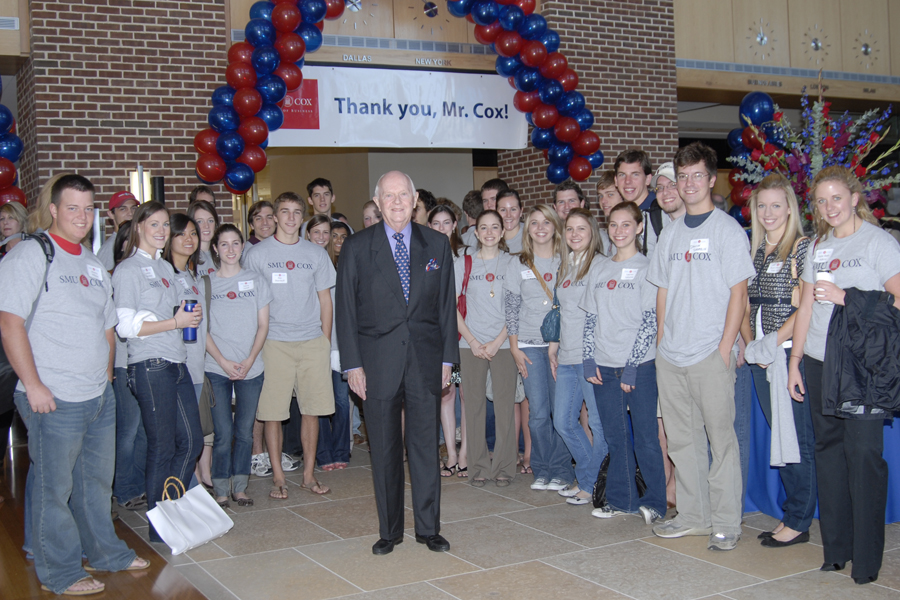 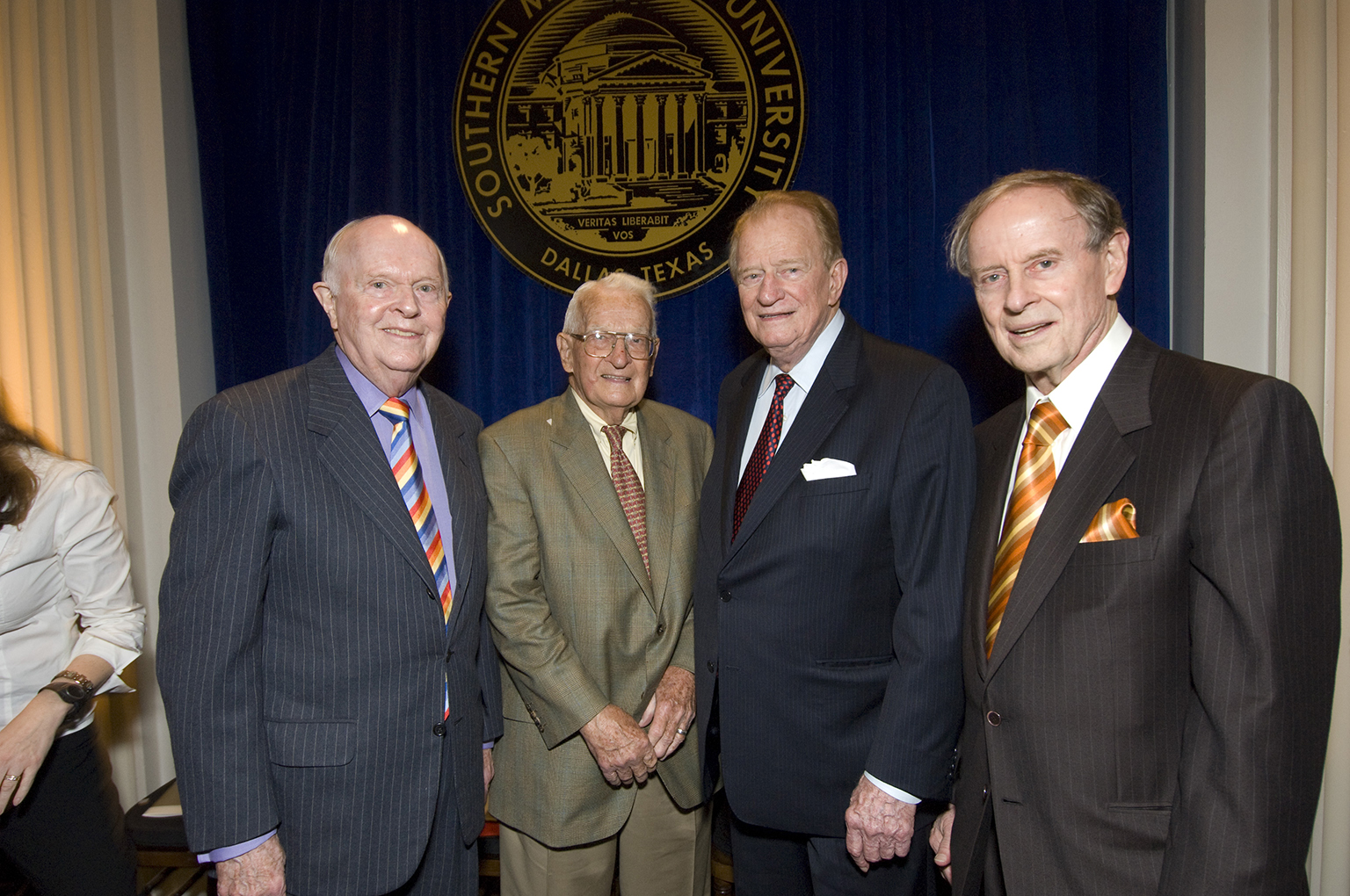 “Ed’s impact on SMU, and particularly on the Cox School of Business, cannot be overstated,” said Brad Cheves, vice president for Development and External Affairs. “His vision and support for educating future business leaders will be felt for generations. We are so grateful that he gifted SMU with his leadership, commitment and integrity. He was a model businessman, family man and member of the community. This is a tremendous loss, and while we honor his life, we also remember how lucky we are that we could call him a Mustang.”

Cox attended SMU’s School of Commerce from 1938–40. At SMU, he was a member of the Mustang band. He was also a member of Phi Delta Theta, Alpha Kappa Psi and Alpha Phi Omega.

In 1942, he graduated from the University of Texas with a BBA degree. He also earned industrial administration and M.B.A. degrees from Harvard University in 1943 and 1946, respectively. He served in the U.S. Naval Reserve during World War II, achieving the rank of lieutenant.

Cox was honored with the SMU Distinguished Alumni Award in 1974. He also received the SMU Volunteer of the Year Award in 1985 and The Mustang Award in recognition of outstanding philanthropy in 1996.

Myers’ predecessor, Al Niemi, retired as the school’s eighth dean in 2017. During his 20-year tenure as dean, Niemi worked closely with Ed Cox shaping the school’s future. “Ed Cox was a visionary, and he was passionate about continuous improvement,” Niemi said. “With his support, we were able to focus on raising student quality in all of our programs and providing leadership training across our curriculum.”

In 1990, Cox was inducted into the Texas Business Hall of Fame, and received the John Rogers Award from the Institute for Energy Law in 1985.

He was the founder, president and trustee of the Ed Cox Foundation, which made a gift to the Library of Congress in 2007 to establish the Edwin L. Cox American Legacy Endowment. He was also a trustee of the George H.W. Bush Presidential Library Foundation.