Skip to main content
The Feral Cat Group at SMU 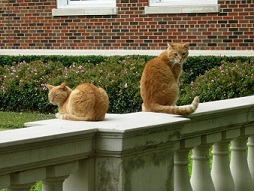 What we do, how it started

Long before the feral cat program at SMU began, a lone animal lover set out to feed the cats after she encountered a starving mama and kitten next to a dead kitten on campus one night while walking her dog. Clo Salisbury made it her mission to informally distribute dry cat food at various spots on campus. The administration recognized her nightly efforts and gave her their support. (A paver commemorates Clo in 5E of the Crain Family Centennial Promenade.)

Upon Clo’s retirement in 1998, arrangements were made to continue the feeding program with a view to the responsible maintenance of a healthy, population-controlled campus cat colony. A single feeder was contracted for several years through the Summerlee Foundation, a private, non-profit charitable foundation, not only to feed but to carry out a Trap-Neuter-Return program.

In 2005, the formal program began with a six-member volunteer team headed by a faculty member. The team carried out feeding at designated stations and continued a Trap-Neuter-Return program. The SMU Police Department generously offered storage space for supplies and temporary kenneling.

Summerlee continued to support the program in various ways over the years. Currently the Feral Cat Group at SMU is funded by the Office of the President, Summerlee and individual donations.

The initial population has been gradually reduced to the current 50, give or take a few. Standard feeding stations and shelters were distributed over the campus in 2012.

Today, it takes about a dozen volunteers to manage the program, with colony locations stretching from the Dedman School of Law to the Dedman Center for Lifetime Sports. Management includes feeding and watering six nights a week, TNR, monitoring the population for new cats or missing cats, maintaining stations and shelters, administering flea meds and responding to emergencies.

One measure of the program’s success is the number of older cats. Feral cats, even those in the best managed colonies, typically live shorter lives than their domesticated counterparts. Today more than 10 campus cats are 10 years old or older.

Some examples of program activities

Many times, volunteers have “rescued” cats that have gotten themselves into dicey situations, including Tanner, who repeatedly got himself trapped in a deep window well. The team ultimately built a ladder that now can be lowered into such spots so the cats can climb out. Another time, Snowshoe, who lives near the Hughes-Trigg Student Center, got lost under the buildings, only to emerge weeks later from a grate on the south side of the Laura Lee Blanton Building. She used up one of her nine lives with that one. Another cat, Damien, was rescued from the top of the Fondren Science Building, which he had reached by climbing a tree.

The biggest of these was moving cats from Binkley Apartments student housing to sites on campus to make room for the George W. Bush Presidential Library and Museum. For well over a year, volunteers worked to relocate cats before construction began. One trio of cats actually moved itself, showing up in a campus parking lot on its own. Torti Mama and Gray Boy still reside near Dedman Sports while Little Red passed away in 2016. At other times, construction crews have taken care to watch out for special needs cats, as when the Centennial Promenade was built near Frankie’s station. Frankie is blind.

The program has dealt with dozens of kittens over the years. Some are the result of inadequate TNR, and sometimes a new cat simply shows up on campus, as happened in 2014, when Mona arrived one day (origin unknown) and managed to birth three litters before she was finally trapped. Trapping her required learning advanced techniques with a local expert. Some of Mona’s kittens wound up staying on campus (too old to socialize), and some were adopted because they were captured while still young enough to be socialized. Lone kittens have been found in and around buildings – source unknown. They are usually vetted, socialized and quickly adopted.

Cats occasionally are dumped on campus. One dumped cat was a female with two sets of kittens (one very young, one older). These were successfully captured and eventually moved first to foster, then to homes. Because dumped cats are usually not feral, the program places them swiftly in programs such as Cat Matchers or into volunteer foster after a routine vet check-up.

The campus cat volunteers, who work closely with the campus police department, are often called upon when “situations” occur. One time in 2016, Cleo, a neighborhood cat, inadvertently took a ride on campus clinging to the top of a Suburban (unknown to the driver). The volunteer feeding that night was called upon to help capture the disoriented animal and hold it in the program’s kennel area until its owner could be located. All in a night’s work for volunteers.

Sometimes the program inadvertently helps other animals on campus, which include raccoons, foxes and possums. One year when a mother possum was killed by a car, her babies huddled in a sheltered area used by the campus cats. After a wildlife expert ascertained that they were old enough to survive without intervention, they shared shelter, food, and water with the colony until they were old enough to take up their normal arboreal habitat several weeks later. Other encounters don’t end as well. Coyotes on campus are a constant threat to the cats, and the program has lost several to coyote predation.

The feral cat volunteers are often summoned by the campus police in a “cat down” situation, which usually means a cat that has been hit by a car. Sadly, most of these animals either die immediately or must be humanely euthanized once it’s determined that their injuries are too extensive to treat. One time, however, the “cat down” was only sleeping and got a quick trip to the vet for neutering before he was placed in a home.

The Feral Cat Group works to: