8 Tips for the First-Time Filmmaker

What I’ve learned from directing a feature-length film

When I directed the 2017-19 Meadows Summer Film Production of The Book of Job, I had no idea what I was doing. What can prepare you to make a movie with dozens of cast and crew members, tons of props and locations, and limited time and money?

Whether you’re making a short film for a class or tackling a feature-length film, here are eight pieces of advice to help make your film a reality:

Andrew Oh is a recent alumnus of Southern Methodist University with a degree in Film & Media Arts. You can find him writing jokes and babysitting while continuing postproduction work on The Book of Job.

For more information on the film, visit here 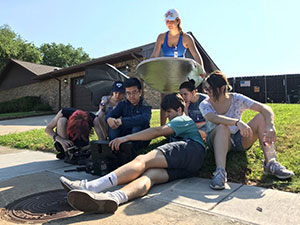 Art department to the rescue: Meadows student Aggie Ryan blocks the sun so the crew can see playback on the director’s monitor, held here by Al Bouchillon, director of photography.