What Can You Do with an Art History Degree?

Grads find success and adventure at a top auction house, archaeological digs and grad school as a Fulbright scholar

Spending nine months as a paid full-time intern at the Getty Museum in Los Angeles. Digging for antiquities in Galilee. Working at Christie’s Auction House in New York City. Presenting a paper in Armenia. Studying Mediterranean archaeology in The Netherlands as a Fulbright scholar.

These are the paths taken by five recent art history graduates from SMU Meadows School of the Arts. Whether working in the U.S. or extending their studies abroad, each graduate is reaping the benefits of pursuing an education that dovetails into a love of art history, anthropology, archaeology and more.

As part of the dig team at the Huqoq archaeological site in Galilee, Israel, Gittleman spends seven hours a day reaching down through the layers of time, past the remains of a modern 1948 village, through layers from the Ottoman period and medieval occupation of 500-1500 AD. The goal? Uncover, study and preserve the 5th-century Byzantine-era synagogue buried beneath it all. 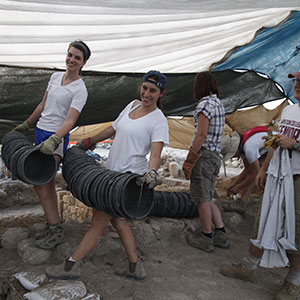 Elena Gittleman, left, on site in the ancient Jewish village of Huquq.

“We’re looking for the fantastic figurative mosaic floors of the synagogue, among other things,” says Gittleman, whose first introduction to the site was as a Meadows graduate student. Now, as an alumna, she helps train new students working at the site. “I teach them how to properly use tools and identify things such as walls, changes in the soil, bones, pottery, glass and mosaic tiles,” says Gittleman. “We work together on various tasks, including washing pottery and cleaning bone found at the site. I am also assisting the dig's mosaics expert, Karen Britt, in a research project about the process and technique of mosaic making.”

Gittleman, who earned her master’s degree in art history in 2015, says she learned a great deal about the archaeological process and 5th-century Galilean art while at Meadows. “The general knowledge I gained during my coursework has been extremely valuable,” she says. “The critical thinking skills I honed during my time at Meadows have been extremely helpful. You have to constantly be thinking and problem solving while working in the field.”

Rachel Spradley is the third Meadows art history student in as many years to be selected as an intern by the J. Paul Getty Museum in Los Angeles.

A year ago, Meadows graduate Rheagan Martin (M.A. Art History ’14) landed one of the coveted Getty internships; today he is employed at the Getty as a full-time curatorial assistant. Before Martin, the Getty invited Meadows graduate student Emily Anderson, who earned her M.A. in art history in 2013 and is now in the doctoral program at University of Southern California. 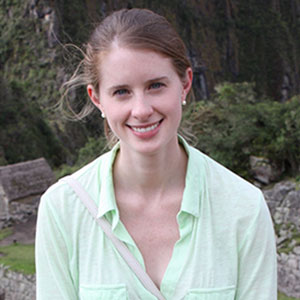 Rachel Spradley will begin her nine-month paid internship at the J. Paul Getty Museum in Los Angeles in September.

Spradley, who earned her M.A. in art history from Meadows in 2015, begins her nine-month paid internship in the Getty exhibitions department in September 2015. She will assist with exhibit logistics and work with various departments within the museum. “I expect I will be able to use the research and writing skills that I developed at SMU, and that the internship will also require good time and project management skills, much as the master’s program did at SMU,” says Spradley.

While a Meadows graduate student, Spradley also interned in the education department at the Metropolitan Museum of Art in New York City. Prior to her arrival at SMU, Spradley studied art history in Vienna, Austria, and Spanish in Buenos Aires, Argentina. Her professional experience includes two years as a program officer for Humanities Texas, the state affiliate of the National Endowment for the Humanities, where she helped coordinate the organization’s teacher institute program.

Erin Pi ñon’s specialty is medieval and early modern Armenia. Manuscripts, works on paper, cases of diaspora, genocide studies and the architecture of early Byzantium are all in her wheelhouse.

While pursuing her master’s in art history at Meadows, she spent summer 2014 as a curatorial intern at the Armenian Library and Museum of America. There she researched the provenance of manuscripts looted during the Armenian Genocide of 1915-17. 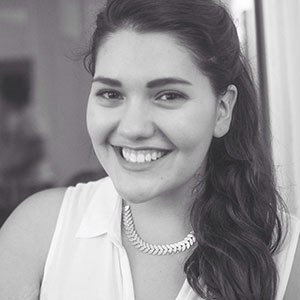 Erin Piñon will present a paper in the capital city of Armenia this summer on the changing status of Khatchk'ar monuments.

In July 2015, Piñon will travel to the Armenian capital city of Yerevan to present her paper, Quarried, Carved and Commemorated: The Armenian Khatchk'ar as a Deposit of Genocidal Trauma, at the Twelfth Meeting of the International Association of Genocide Scholars.

According to Piñon, the paper addresses the genealogy of an Armenian sculptural object called the Khatchk'ar. Khatchk'ars, also known as “cross-stones,” are carved, memorial stone or wooden monuments used for funerary or commemorative purposes.

“Today, these monolithic funerary steles stand as symbols of Armenian religious, cultural and artistic history,” says Piñon. “In this paper, I question the current artistic identity of the Khatchk’ar. In two case studies, I track a shift in function from marker of personal identity to monument of collective identity as determined by a post-genocide population of diasporic Armenians.

“For the first time, the cross-stones are being simultaneously destroyed, rescued and created—altering their artistic worth and cultural significance,” she says. “I conclude that the Khatchk’ar has lost its ability to mark an individual’s life; instead, it has been appropriated as the foremost symbol of Armenian collective, national identity.”

After presenting her paper in Yerevan, she will travel to Venice, where she will study the Armenian language at Ca' Foscari University of Venice. While there, she will be an active participant at the Armenian Pavilion in the Venice Biennale.

“Art history is a multifaceted world, but there is a niche for anyone eager and driven enough to carve it out for themselves,” says Piñon. Piñon received her master’s in art history from Meadows in 2015.

A new administrator for the head of the jewelry department at Christie’s in New York City, the 2015 graduate with bachelor’s degrees in art history and history started getting familiar with the famous auction house in summer 2014.

“I interned in the jewelry department after my junior year at Meadows, so I’m fairly familiar with what I’ll be doing when I start my new position in July,” says Damianos. “I’ll be providing sales support during the auction cycle, working with clients interested in buying and selling jewelry, and working with jewelry dealers, in addition to administrative work for the head of the department.” 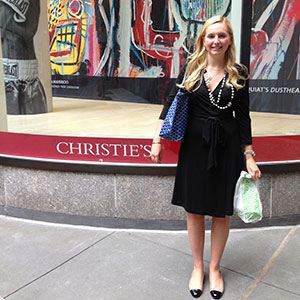 Lexy Damianos interned for Christie’s in New York City and is now a full-time employee.

Damianos says the research skills she gained in her Meadows art history classes have been advantageous. “Even though I'm not doing research strictly for a research paper anymore, the same skills are helpful in my work,” she says, citing database experience, primary source analysis and learning how to be thorough with her resources as key components of her education. “Also, the practice of ‘looking,’ really carefully observing a piece of art or jewelry, is something I learned while at SMU. Professor [Pamela] Patton urged us to sit and spend time with a work of art before attempting to write about it. This critical looking skill has proved invaluable.”

Doming is one of four U.S. students selected this year to receive a special grant to attend VU University in Amsterdam, The Netherlands this fall, where she’ll be studying Mediterranean archaeology. 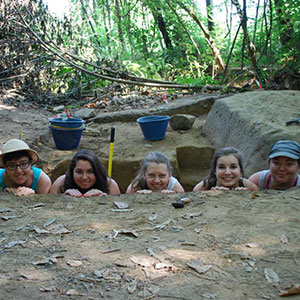 While a Meadows undergrad, Doming spent time at the Poggio Colla archaeological site in Tuscany, Italy, studying Etruscan artifacts and history. Archaeologists consider the site important because it has undisturbed habitation layers that span much of Etruscan history. Poggio Colla was inhabited as early at the seventh century BCE. Excavations to date have revealed well-defined fortification walls, an extensive necropolis area and the rare remains of an archaic monumental building.

“While studying art history at SMU I had a wide variety of courses that focused on different regions and cultures throughout human history,” says Doming. “I really feel like these classes complimented the other courses I was taking for anthropology and helped me realize that, while I am still interested in museum work, I was really interested in being a part of the excavation, recovery and interpretation of what artifacts meant for prehistoric people.”

When asked what advice she would give to younger students who are unsure of which degree to pursue, Doming says she would encourage them to first picture how they see themselves 30 years in the future. “Then, think about what kind of jobs will fit into that image and find a career that can also be a lifelong passion,” she says, “and know that it’s okay to change your mind!”

Read more about the B.A., M.A. and Ph.D. in Art History at SMU Meadows