Event is most successful in its 22-year history, raising over $1 million for Meadows Scholars Program 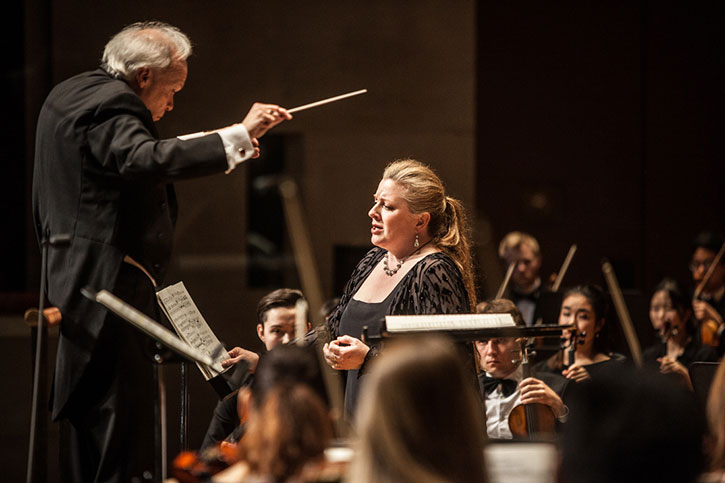 A $1.5 million challenge grant from the Morris Foundation to support the Meadows Scholars Program at SMU’s Meadows School of the Arts was announced at the school’s annual Meadows at the Meyerson benefit concert on March 31 in the Meyerson Symphony Center. Led by SMU alumnus Ken Morris ’72 and his wife Linda of Carefree, Arizona, the foundation will match gifts designated to the Meadows Scholars endowment by December 31, 2015. Education is a primary focus of the Morris Foundation, and the family has provided significant support to SMU over the years, including gifts for the Information Technology Center in Blanton Student Services Building, Campus Technology Initiative, the Kenneth R. and Linda A. Morris BBA Scholars Endowment Fund, MBA Scholarships and, most recently, the Morris Endowed Director of the Caruth Institute for Entrepreneurship in the Cox School of Business.

This year’s concert was the most successful in the event’s 22-year history: Through donations and the Morris Foundation match for gifts designated to permanent endowment, the event raised over $1 million – a new record – for the Meadows Scholars Program.

The Meadows Scholars Program was launched in 2008 and provides scholarship support to applicants who meet both stringent academic and artistic criteria. The program has helped SMU successfully compete for the brightest and most talented students nationwide.

“We are deeply grateful to the Morris family for this generous commitment to enhance student quality at SMU,” said SMU President R. Gerald Turner. “With this challenge grant, the Meadows School of the Arts will be able to continue to build this critical scholarship program and to successfully attract the nation’s top students in the arts and communications fields.”

Held each spring, the Meadows at the Meyerson event showcases the Meadows Symphony Orchestra and honors a community leader. The 2015 honoree was noted arts and civic leader Caren Prothro, and the fundraising effort was led by event chair Heather Furniss and honorary chairs Sarah and Ross Perot, Jr.

Event honoree Caren Prothro is an active supporter of the arts and higher education. She is past chair of SMU’s board of trustees and current co-chair of SMU Unbridled: The Second Century Campaign, the largest fundraising effort in the University’s history with a goal of $1 billion. She also served as vice chairman of the board of the AT&T Performing Arts Center from 2001 to 2010 and helped raise over $330 million towards the construction of the Winspear Opera House, Wyly Theater, Sammons Park and Strauss Artists’ Square. She has received numerous awards, including the TACA Silver Cup Award and Linz Award.

The Meadows Symphony, led by conductor Paul Phillips, was joined by two renowned opera singers – tenor Thomas Studebaker and mezzo soprano Michaela Martens – in a presentation of Mahler’s Das Lied von der Erde (“The Song of the Earth”). Both singers have performed with the Metropolitan Opera and other major companies worldwide.

“Meadows at the Meyerson is the embodiment of our values as an arts organization in the community. We present the critically recognized Meadows Symphony Orchestra in our city’s Arts District and raise money for scholarships to bring even more talented students from around the world to Dallas,” said Sam Holland, dean of the Meadows School of the Arts. “We were especially delighted this year to honor Caren Prothro, long a champion for arts and cultural excellence in our city. We are also grateful for her longstanding support of the Meadows Scholars Program, which allows Meadows to compete with the top arts and communications programs in the U.S., attracting prospective students to Dallas who might otherwise wind up in Boston, New York, Chicago or L.A. Many of these academically gifted artists, or ‘smartists’ as we like to call them, will choose to stay in Dallas after graduation, building Dallas’s intellectual capital and momentum as one of the most culturally dynamic cities in the U.S.”

If you would like to make a donation to the Meadows Scholars Program, please contact Margaret Weinkauf at 214.768.4690 or mweinkauf@smu.edu for more information.