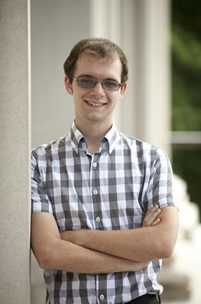 What is your research area?
I'm interested in studying temperance and prohibition movements, with an emphasis on the period of national prohibition itself (1920-33).  More broadly, I'm interested in how people conceive, both positively and negatively, of mind-altering substances like alcohol, marijuana, etc.

What is something cool about your field?
Prohibition seems to be enjoying something of a historical renaissance right now.  As in, it's regaining academic interest.  Which to me is very important, because I believe Prohibition is understudied.

What is the best thing you've done as a graduate student at SMU so far?
I will be presenting a research project of mine, concerning two short-lived Texas Native American reservations that existed in the 1850s, at an academic conference in Tahlequah, Oklahoma.  It'll be my first conference, and I'll be able to present my hard work to others!

What is your favorite thing to do in Dallas?
To be honest, I haven't gotten to get away from SMU and explore Dallas proper much.  But going to the Texas State Fair for the first time last fall for the Texas-OU game was absolutely amazing (and hot).

What do you wish you'd known before starting graduate schools?
That there absolutely will be a transition period in that first semester that's tough to adjust to, and that it's completely normal and probably expected to feel overwhelmed by all the newness and new responsibilities in your life.

What is your favorite leisure activity?
Ienjoy drining beer and wine with my friends while playing video games on my Xbox.