Commencement not only includes academic protocol and traditional costume, but also symbolic elements of the academy and of the procession and ceremony. Among the most visible of these symbols are the gonfalons.

Gonfalons, ceremonial banners or flags suspended from a crossbar, have descended from medieval Italy where they were used as symbols of office or state. They have been adopted by many universities to enhance the ceremonial nature of the commencement exercises, and to designate each of the colleges or groups within a university.

At SMU, the honor of carrying a gonfalon is awarded to the student with the highest grade point average in each college. Standard bearers, as they are referred to on our campus, march at the head of their college during the procession, similar to athletes in the Opening Ceremonies of the Olympic Games. The gonfalons separate each college as the graduating students file onto the floor of Moody Coliseum during the procession.

SMU has three generations of gonfalons. The first gonfalons, inaugurated in 1978 under the direction of Chief Marshal Lorn Howard and approval of Provost James E. Brooks, were made of velvet in each of the school colors with the discipline of each school and SMU logo stitched in white felt. In 1978, SMU had six gonfalons - Arts, Business, Engineering, Law, The College, and Theology. 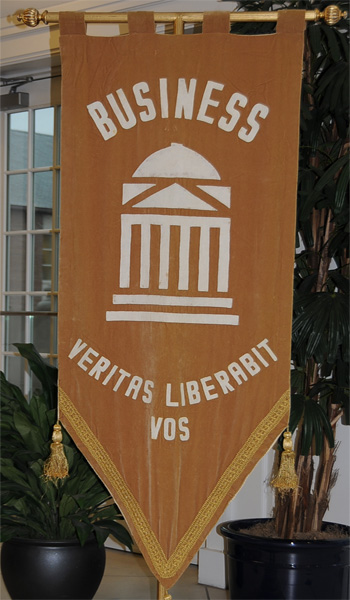 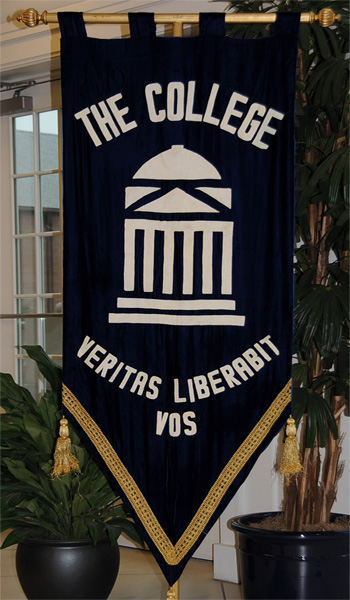 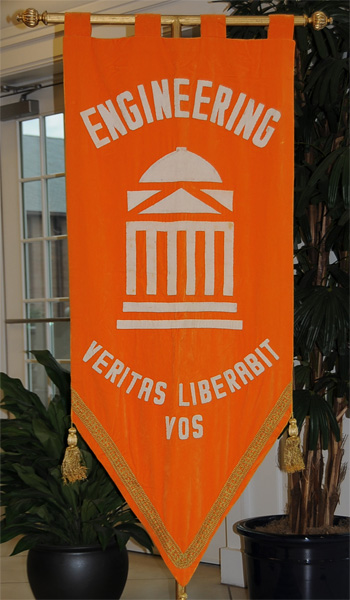 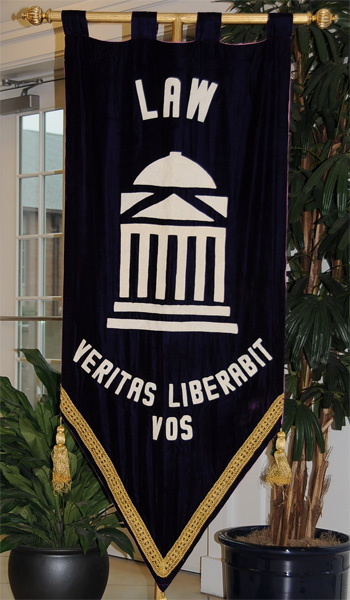 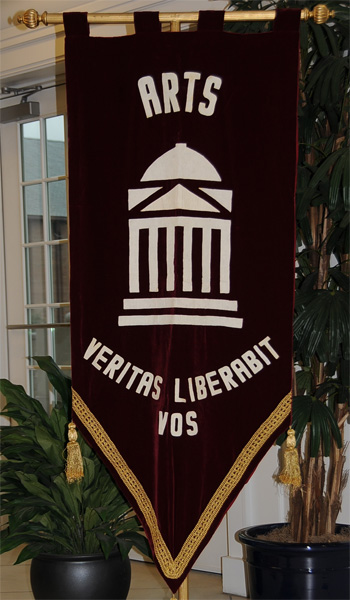 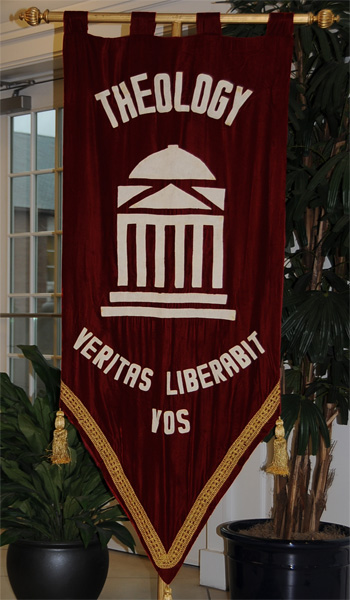 The second gonfalons, introduced in 1993 under the direction of Chief Marshal Brad Carter and approval of Provost Ruth P. Morgan, contained heraldic designs created by the school and SMU colors, in corduroy fabric, and included the school name in either black or white fabric. These ceremonial banners were designed by Robert B. Chambers, Associate Professor Emeritus of Theatre in Meadows School of the Arts, and fabricated by Mamie Chambers. The second family of gonfalons consisted of eight banners - Cox, Dedman, Dedman Law, Lyle Engineering, Meadows, Perkins, Simmons Education and Human Development, and 50th Class Reunion. 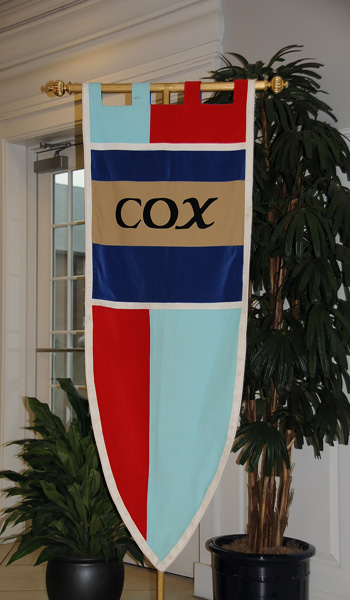 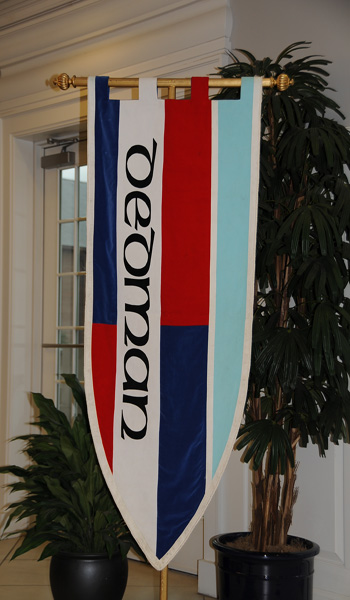 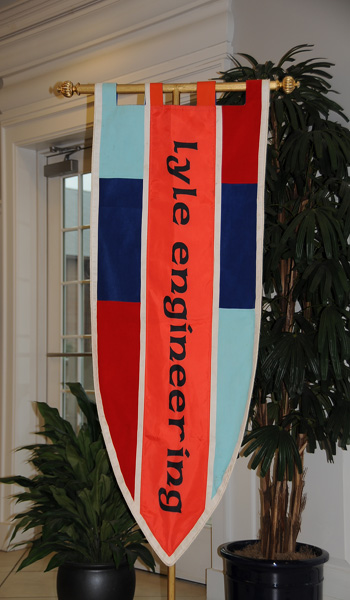 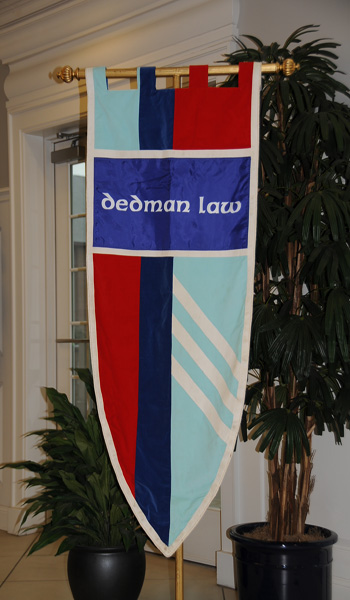 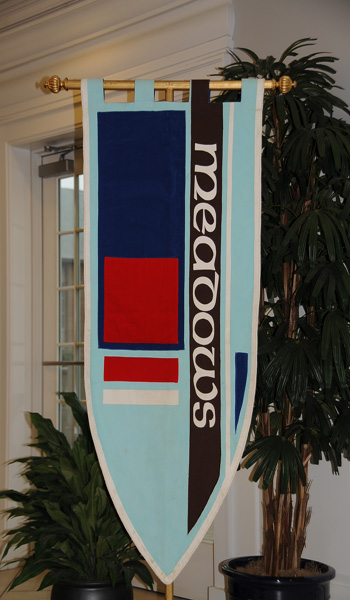 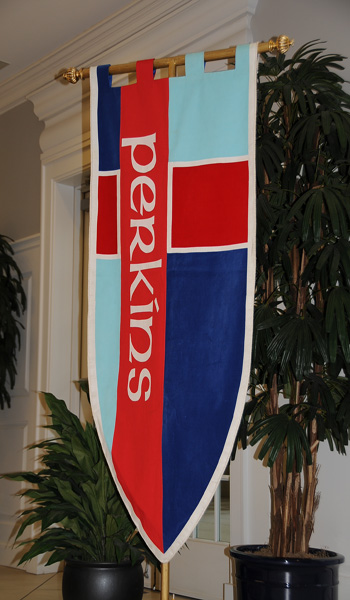 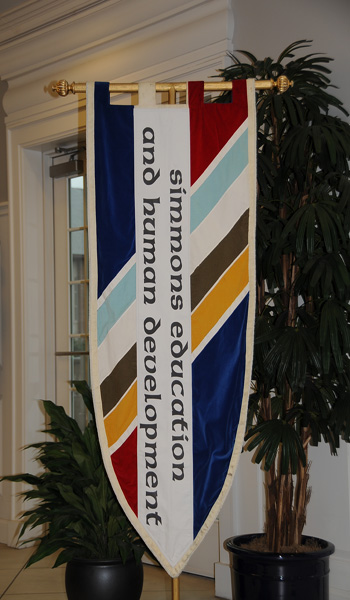 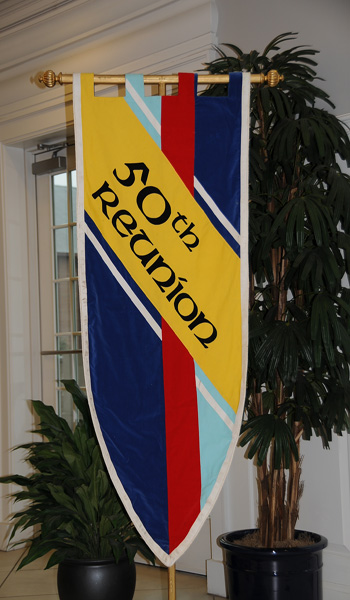 SMU's newest gonfalons were instated in December 2009. They were manufactured by the Mcilhenny Banner Company. The design was a collaborative effort coordinated by Director of Academic Ceremonies Gretchen Voight and included the McIlhenny Company, President R. Gerald Turner, Chief Marshal Tom Fomby and University Registrar John Hall. The current gonfalons are hung on a 39-inch crossbar, and are created of durable colorfast oxford nylon, with discipline colors, SMU logo, and school name affixed by appliqué. Each banner is adorned by gold cords on either side of the fabric. The modern gonfalons consist of eleven banners - Cox School of Business, Dedman College of Humanities and Sciences, Dedman School of Law, Lyle School of Engineering, Meadows School of the Arts, Perkins School of Theology, Simmons School of Education and Human Development, The Faculty, The Guildhall, 50th Class Reunion, and SMU. 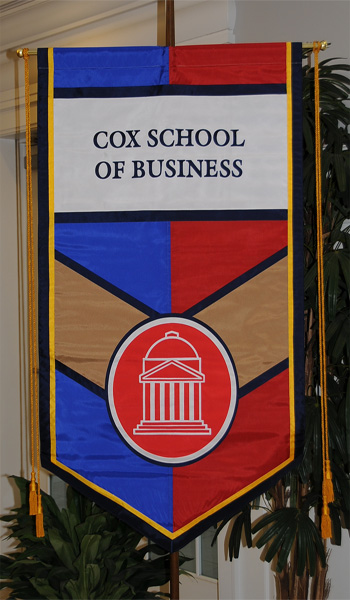 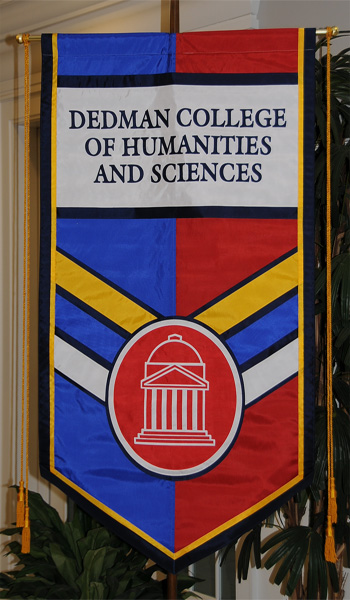 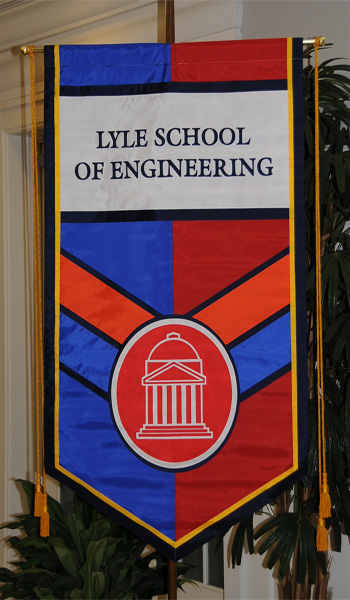 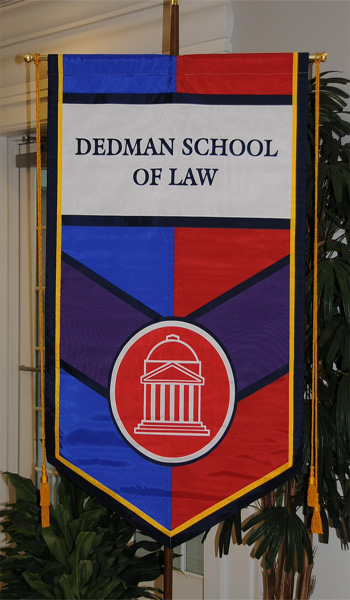 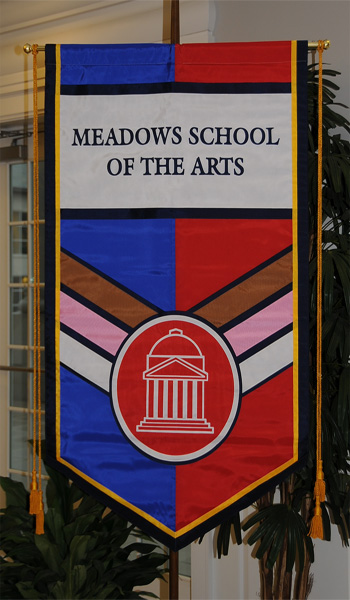 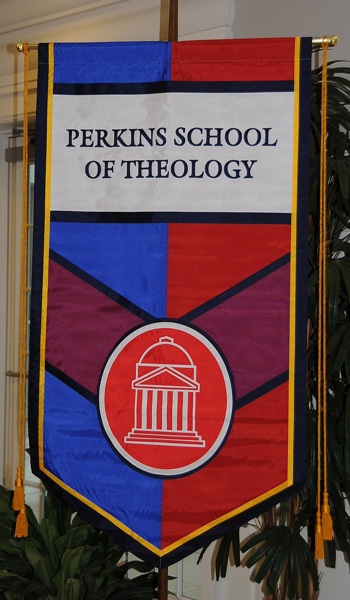 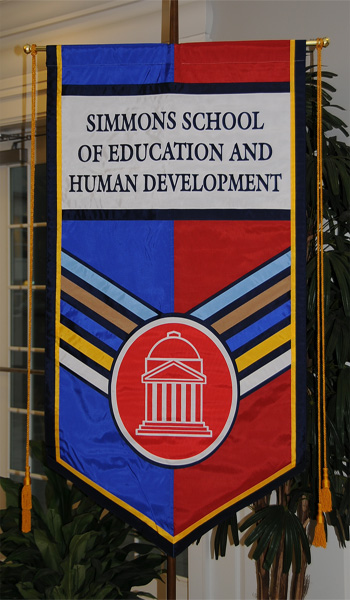 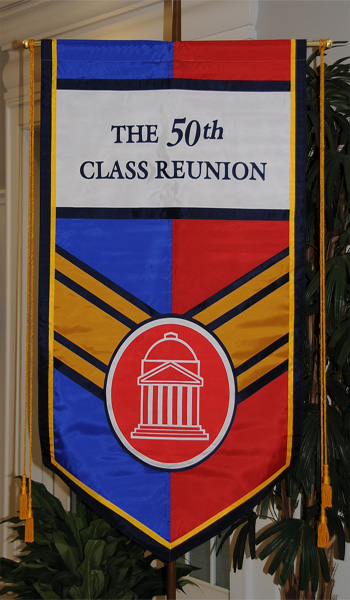 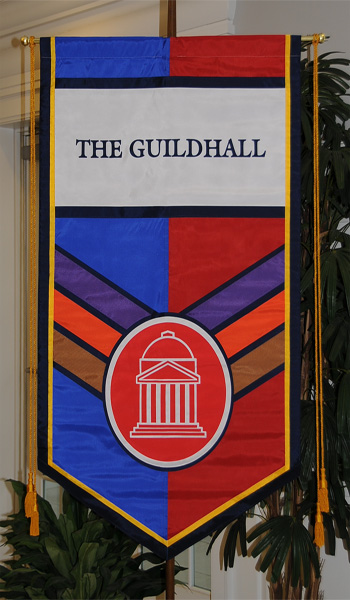 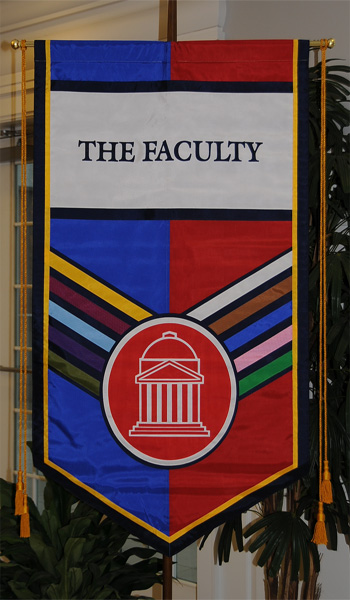 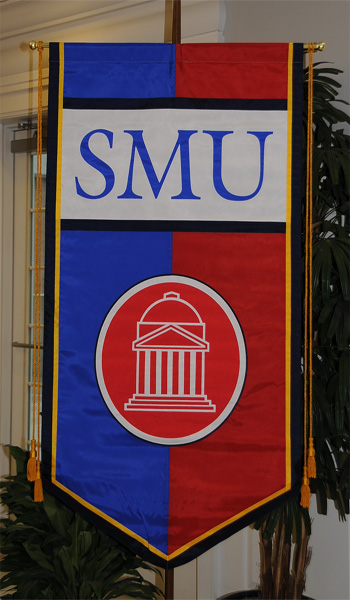 A list of recent standard bearers is available at smu.edu/registrar/standardbearers/.