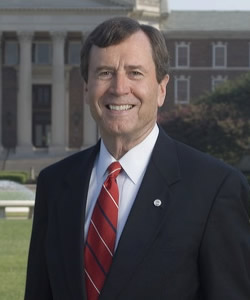 As president of SMU since 1995, R. Gerald Turner is leading an era of unprecedented progress. Under his leadership, the University continues to advance as an institution of national excellence and international renown. SMU’s progress has included increases in average admission test scores, a near tripling of student applications, an increase in enrollment of underrepresented communities up to 33% and a quadrupling of the endowment.

Building on a history of excellence, SMU Ignited: Boldly Shaping Tomorrow, which launched publicly in September 2021, is the third comprehensive fundraising campaign initiated under President Turner’s leadership. The multiyear $1.5 billion campaign for impact aims to build on SMU’s strengths and empower outstanding students, enrich teaching and research, and enhance campus and community. SMU Ignited concluded the first year of its public phase with more than $880 million raised.

During the planning and public phases of the campaign, SMU has secured the largest gifts in its history, including a landmark gift of $100 million from the Moody Foundation to create the new Moody School of Graduate and Advanced Studies, SMU’s eighth degree-granting school; the first $50 million gift from an alumni family, from Carolyn L. and David B. Miller ’72, ’73 for the Cox School of Business; the largest gift in SMU Athletics history, a $50 million commitment from the Garry Weber Foundation toward the Garry Weber End Zone Complex at Gerald J. Ford Stadium; and the largest gift in University history by a non-alumnus from William S. Spears to establish the William S. Spears Institute for Entrepreneurial Leadership in the Cox School of Business.

Fueled by these investments, the University continues to advance as a leading center of teaching and research that accelerates knowledge, addresses significant issues, prepares students to be world changers and broadens community engagement. SMU ranks in the top 20% of the best national universities by U.S. News & World Report.

From its home in the global city of Dallas, SMU’s vibrant campus offers enrichment opportunities such as the Tate Lecture Series and the Meadows Museum to students and the wider community. President Turner led efforts with the Board of Trustees to attract the George W. Bush Presidential Center, which opened at SMU in 2013. SMU and the Bush Presidential Center partner through fellowships, public lectures, the new George W. Bush Institute-SMU Economic Growth Initiative and additional collaborations that bring together students, faculty and global experts to tackle pressing challenges.

Beyond the campus, President Turner has been a leader in NCAA Athletics. He has chaired four Division I conferences, including the AAC. He has also served on the boards of the Dallas Citizens Council, the American Council on Education and the National Association of Independent Colleges and Universities, and he co-chaired the Knight Commission on Intercollegiate Athletics for nearly 10 years. In Texas, he serves on the Dallas Regional Chamber of Commerce and is a member of its University CEO Council. He also serves on the boards of the Methodist Health System Foundation, the Salvation Army of North Texas and the AT&T Performing Arts Center.