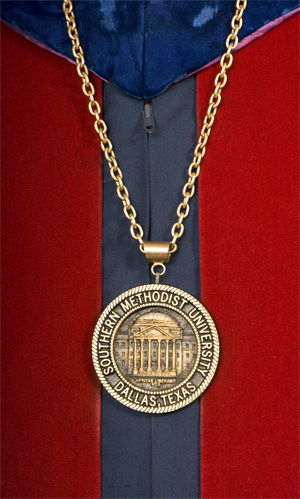 Chains of office, also known as collars, were used as badges of office in the Middle Ages. Today, they are custom designed metal necklaces worn by the president during academic ceremonies as part of his or her regalia.

The chain of office designed for the 10th President of Southern Methodist University, Dr. R. Gerald Turner, is made of bronze, a strong and durable metal. The medallion of the necklace is dominated by the University seal design, just as the seal is the centerpiece in the floor of the Rotunda in Dallas Hall, SMU's historic first building.

The seal is an appropriate choice for the design of the medallion because it represents the president's responsibility to the sound education of each and every student at SMU. Each first-year and transfer student passes through Dallas Hall and views the University seal on their processional entry into the university at Opening Convocation. Upon graduation, students reverse the process during the Rotunda Recessional ceremony at the conclusion of the Baccalaureate Service during May Commencement weekend.

The bail, joining the medallion and the chain, represents the institution's bond between the faculty and the student body. Equally, the 32-inch chain, a work of art where two ends are clasped together, represents the joining of the desire to teach and the eagerness to learn demonstrated by SMU's faculty and students.