“The Last Card in the Deck”: The Surge in Iraq 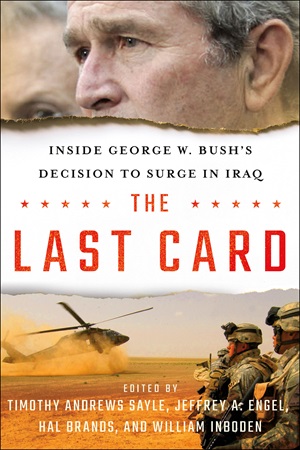 By late-2006, prospects for peace and victory in the Iraq War seemed grim. According to Secretary of State Condoleezza Rice, it seemed that the President was down to the “last card in the deck.” Against the advice of many military and White House advisers, President Bush doubled down by playing this card: the Surge. This project seeks to illuminate the decision-making process by which President Bush came to announce his January 2007 decision to surge American forces in Iraq.

We have published the findings of this project in two forms:

First, we have published the video and complete transcriptions of the interviews our team conducted. We welcome scholars and the general public alike to view, read, and cite these new and unique sources for our study of American history.*

Second, we have worked with Cornell University Press to publish the book The Last Card: Inside George W. Bush's Decision to Surge in Iraq. Edited by Timothy Andrews Sayle (former CPH Postdoc), Jeffrey Engel (CPH Director), Hal Brands, and William Inboden, this book explores President George W. Bush's decision to surge. The first half of the book tells the story of the Surge decision-making process in the words of the interviewees themselves, edited and sequenced by the book editors. The second half of the book presents eight chapter-length critical assessments of the Surge decision process, written by scholars of American foreign policy, grand strategy, and statecraft. Each of these scholars make use of the new sources provided by the CPH’s Collective Memory Project interviews.

*The only interview we have not published is the one conducted with President George W. Bush, in accordance with the terms of the agreement between both parties. However, excerpts of that interview have been published throughout the book The Last Card: Inside George W. Bush's Decision to Surge in Iraq (Cornell University Press).

These interviews were completed in partnership with:

These interviews will remain sealed from public viewing until a date specified in the agreement with each individual.

“The Last Card in the Deck”: The Surge in Iraq