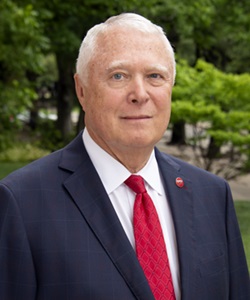 Paul J. Ward is vice president for Legal Affairs, general counsel, and Secretary to the Board of Trustees at SMU, a position he has held since 2009.

The general counsel serves as the chief legal advisor to the president, Board of Trustees, and University officers and administrators, and is responsible for oversight of all legal matters affecting the University, including those involving institutional governance, intellectual property and licensing, research contracts and compliance, charitable giving, employment matters, student-related issues, real estate, taxation, and government regulations. Ward also serves as an adjunct faculty member in the Annette Caldwell Simmons School of Education and Human Development. He is a frequent speaker on legal issues and has authored papers and other publications on higher education law.

Prior to SMU, Ward served as vice president for university administration and general counsel at Arizona State University from 2004 to 2008. He served as general counsel to ASU from 1991 to 2008. As vice president for university administration, his areas of responsibility included human resources, the police department, university audit and advisory services, and the risk management and environmental health and safety department. Ward also served as an adjunct faculty member in the Sandra Day O’Connor College of Law and the Mary Lou Fulton College of Education at ASU. Prior to his association with ASU, Ward served the University of South Carolina System as general counsel from 1979 to 1991. Previously, he was engaged in private practice in the Washington, D.C., office of Casey, Lane & Mittendorf.

Ward served as president (1996–97) and as a member of the board of directors (1988–92 and 1993–98) of the National Association of College and University Attorneys (NACUA). In 1993, he established NACUA’s electronic discussion list, NACUANET, which has more than 5,000 participating members in the United States and eight foreign countries. In June 2000, he received the prestigious Distinguished Service Award from NACUA. He served as a member of the NCAA General Counsel Advisory Board from 2000–2010. Also, he has served in the American Bar Association House of Delegates. In 2002, Ward received the Thomas S. Biggs Award at the Stetson University College of Law, National Conference on Law of Higher Education. Ward is an AV Preeminent Peer Review Rated, Martindale-Hubbell's highest peer recognition for ethical standards and legal ability. Ward was the recipient of the 2020 Robert H. Dedman Award for Ethics & Law from the Texas General Counsel Forum. He is a fellow of the Texas Bar Foundation.

Ward graduated from the SMU School of Law (J.D., 1975) and Eastern Illinois University (B.S., 1971; M.A., 1974). He has been admitted to practice law in Texas, Arizona, South Carolina, Indiana, the District of Columbia and the U.S. Supreme Court.