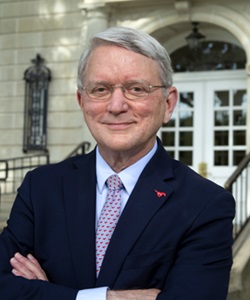 Professor Stanley holds the Geurin-Pettus Distinguished Chair in American Politics and Political Economy in the Department of Political Science in Dedman College at SMU. The focus of his research and teaching at SMU has been within American government – Southern politics, Latino politics, and presidential elections.

He has published three books, Vital Statistics on American Politics (CQ Press, fifteen editions, 1988–2015); Voter Mobilization and the Politics of Race: The South and Universal Suffrage, 1952 –1984 (Praeger, 1987); and Senate vs. Governor, Alabama 1971: Referents for Opposition in a One-Party Legislature (University of Alabama Press, 1975).

Professor Stanley has testified as an expert witness in federal court cases on voting rights and redistricting, serving on four occasions as the federal court’s own expert.

At SMU Professor Stanley has been a member of the Executive Board for the John Goodwin Tower Center for Public Policy and International Affairs since 2003, chaired the Honors Task Force (2006–2007), served on the General Education Review Committee (2007–2009), and co-chaired the Faculty/Staff Steering Committee in the Second Century Campaign (2009–2010).

Professor Stanley served as president of the Southern Political Science Association in 2000–2001. He received a Distinguished Teacher of the Year award from the Student Senate at the University of Rochester. In 2010 he received an award “For Outstanding Teaching in Political Science” from Pi Sigma Alpha and the American Political Science Association. In 2008 he was given the Distinguished University Citizen Award at SMU, in 2013 the Outstanding Administrator Award at SMU, and in 2010 the "M" Award, the most highly prized recognition bestowed upon students, faculty, staff and administrators at SMU.