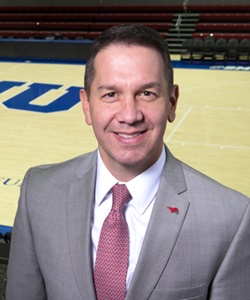 During Hart’s decade on the Hilltop, SMU has repeatedly shown its commitment to competing at the top level of college athletics and to providing a best-in-class student-athlete experience.

During the last three years alone, SMU has invested over $125 million in football construction projects, pushing the total invested in SMU Athletics facilities to a quarter of a billion dollars since 2013.

SMU has also reinforced its long-standing commitment to student-athlete development, well-being and experience by expanding its health, safety and well-being initiatives and staffing, its personal and professional development programs and degree completion opportunities.

SMU has added training staff and mental health professionals to address the physical, emotional and mental demands associated with being a student-athlete, and starting in fall 2022, SMU Athletics will expand its successful Life After Ball (LAB) Program to all sports. LAB is designed to help student-athletes make a smooth transition to the workforce after their playing days at SMU are over. LAB also utilizes the powerful network that SMU has in the DFW area in addition to former SMU student-athletes and prominent alumni. SMU has also added a BOLD (Big Opportunities Live in Dallas) Program to its suite of student-athlete development tools, with the goal of helping student-athletes navigate and capitalize on Name, Image, Likeness (NIL) legislation. BOLD incorporates INFLCR, a comprehensive NIL education and compliance solution, and campus resources from the Cox School of Business, the Dedman School of Law and the Meadows School of the Arts. These programs are all in addition to the full cost-of-attendance scholarships SMU provides for its student-athletes. All told, SMU invests almost $150,000 in each of its almost 500 student-athletes each year.

These offerings have proven fruitful, as SMU student-athletes excel in the classroom, with 67% earning cumulative GPAs of 3.0 or higher, over one-third boasting GPAs of 3.5 or better and 91% earning degrees. During Hart’s decade at SMU, over 1,400 degrees have been conferred on Mustang student-athletes.

SMU has also experienced broad success athletically over the past 10 years, winning 30 team conference titles across 13 sports and advancing 16 of 17 Mustang sports to the post-season. In 2021-22 alone, SMU won five conference championships, the most team titles since 2008-09, had 10 programs that were ranked or received votes in their national polls and had 14 programs finish in the top four in conference standings. SMU student-athletes won 33 individual or event conference championships and totaled more than 100 all-conference honors across the 17 programs.

In the community, SMU's partnership with the City of Dallas has been strengthened through community service and the Dallas, 214, "Born and Raised" and Triple-D marketing and branding initiatives.

Due to the generosity of alumni and friends, annual giving has reached record levels in support of operations, projects and facilities. In the past 10 years, SMU Athletics has been the beneficiary of an astounding 47 seven-figure gifts and 381 gifts of $100k or more, and for the 2022 fiscal year, SMU Athletics raised an all-time record $73 million. Because of the high level of support, SMU has renovated and expanded Moody Coliseum and opened numerous new facilities including the SMU Indoor Performance Center and Armstrong Fieldhouse, the Miller Event Center, the Styslinger/Altec SMU Tennis Complex, the Robson & Lindley Aquatics Center and Barr-McMillion Natatorium, the Payne Stewart SMU Golf Training Center at Trinity Forest Golf Club and Washburne Soccer & Track Stadium. Construction will begin soon on an outdoor pool to complete the Robson & Lindley Aquatics Center and Barr-McMillion Natatorium Complex and design is underway for the $100M Garry Weber End Zone Complex.

Hart also developed and installed the Strategic Plan for SMU Athletics titled, "The SMU Advantage." The SMU Advantage consists of a departmental vision, mission, values and goals and operates on a principle of S.P.I.R.I.T. (Service, Passion, Integrity, Respect, Innovation and Teamwork), with a focus on the student-athlete and aligning the Athletics Department with the educational mission of the University.

Hart is serving as NACDA President for the 2022-23 membership year and has served on the NACDA Executive Committee, the NCAA Division I Championship/Sports Management Cabinet, the FCS Athletics Directors Association Executive Committee and as a faculty member for the D1-A Athletics Directors' Institute. Hart is an active speaker, and has made presentations at the Career in Sports Seminar, the NACDA Leadership Institute, the Texas High School Athletic Directors’ Association and the Dallas Women’s Club, to name a few.

Hart came to SMU after six years as Director of Athletics at Tennessee at Chattanooga. Hart served seven years at Oklahoma in various athletics administrative capacities, ending as the Senior Associate Athletics Director in 2006. Hart has also worked in athletics at North Carolina and East Carolina and has served with the U.S. Olympic Committee.

A graduate of UNC, Hart earned a bachelor's degree in physical education, health and sport science. Hart and his wife, Allison, also a graduate of North Carolina, are proud parents of Trevor, an SMU grad, and Caroline (Carly), an SMU sophomore.

A third-generation athletics administrator, Hart's father, Dave, served as Director of Athletics at Tennessee, Florida State and East Carolina, and his late grandfather, Dave Sr., served in a variety of roles within collegiate athletics including stints as a Coach, Athletics Director and Conference Commissioner.