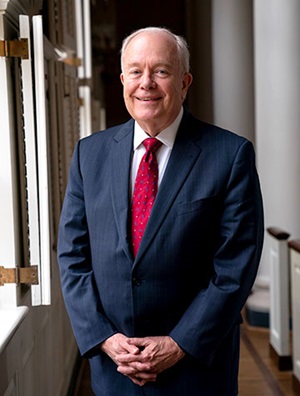 Michael McKee, former resident bishop of the Dallas area of the United Methodist Church, is dean ad interim of Perkins School of Theology.

In 2012, McKee was elected to the episcopacy by the South Central Jurisdictional Conference and assigned to serve as the resident bishop of the Dallas Area.

Under his leadership, the North Texas Conference of the United Methodist Church launched a significant initiative called Journey Toward Racial Justice and created a new cabinet-level position — director of racial diversity, equity and inclusion.

McKee previously served as president of the board of the General Council on Finance and Administration of the United Methodist Church. He serves on the boards of trustees of Southern Methodist University, Texas Methodist Foundation, Methodist Health System, Dallas, and is past chair of the executive board of Perkins School of Theology.

He was ordained elder in 1979 in the Central Texas Annual Conference, where he served several churches, including serving 15 years as the senior pastor of First UMC Hurst. McKee also served as the Bishop of the United Methodist Mission in Honduras.

McKee’s honors include a 2005 honorary Doctor of Divinity from Texas Wesleyan University. He also was honored with the 2017 Perkins Distinguished Alumnus Award and the 2019 Texas Methodist Foundation’s Medallion of Merit.

McKee is a native of Fort Worth, Texas. He earned a Bachelor of Arts degree from the University of Texas at Austin and a Master of Theology from SMU’s Perkins School of Theology.