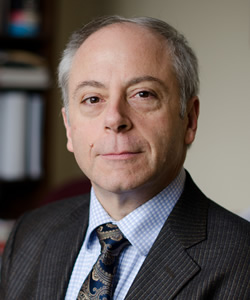 Thomas DiPiero, whose academic interests range from the psychoanalysis of race and gender to French literature, is dean of SMU’s Dedman College of Humanities and Sciences and professor in the Departments of English and World Languages and Literatures.

He is the author or co-editor of three books: White Men Aren’t (Duke University Press, 2002); Illicit Sex: Identity Politics in Early Modern Europe, edited with Pat Gill (University of Georgia Press, 1997); and Dangerous Truths and Criminal Passions: The Evolution of the French Novel 1569-1791 (Stanford University Press, 1992). He served as editor of the Journal for Early Modern Cultural Studies (University of Pennsylvania Press) from 2005-13, and has written several book chapters, as well as numerous journal articles.

A recognized authority on Harper Lee’s classic novel, To Kill a Mockingbird, DiPiero previously served as a visiting faculty member at SMU-in-Taos in 2011 and as a guest lecturer for SMU’s Gilbert Lecture Series in 2008.

DiPiero came to SMU in August 2014 from the University of Rochester, where he served as dean of humanities and interdisciplinary studies in the College of Arts, Sciences and Engineering and professor of French and of Visual and Cultural Studies.

At Rochester, he won the Robert and Pamela Goergen Award for Distinguished Achievement and Artistry in Undergraduate Teaching in 2004 and the University Dean’s Award for Meritorious Service in Ph.D. Defenses in 2011. He was elected in 2009 as an honorary faculty member of the Keidaean Senior Honors Society. He served as the principal investigator for “Training Graduate Students in the Digital Humanities,” which received $1 million in funding from the Andrew W. Mellon Foundation.

Prior to Rochester, DiPiero was a visiting assistant professor of French and Humanities at Reed College in Portland, Oregon, from 1985-87 and a lecturer at the Université de Paris-X, Paris, France, from 1982-83.

As dean of Dedman College, DiPiero heads the largest of SMU’s seven colleges and schools. About half of SMU’s undergraduates pursue their majors in Dedman College.