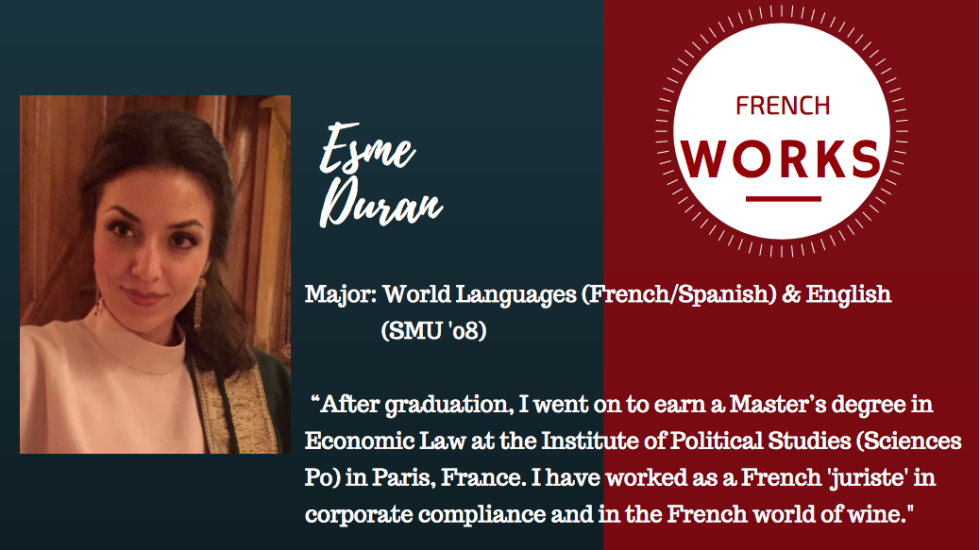 “After graduation, I went on to earn a Master’s degree in Economic Law at the Institute of Political Studies (Sciences Po) in Paris, France, and I am currently writing a novel that I hope will be translated into French and Spanish.”

Why did you choose to major/minor in a World Language?
Though I grew up in a Spanish-speaking household, I didn’t master the language, so studying Spanish (the Heritage Speakers class) revealed to me the complexity, depth and beauty of it. I suspect that what made me choose to major in Languages was my innate love of words, languages, the world, cultures, so even while in law school, I took up another two languages: Arabic and Portuguese (the former being much more difficult than contract law!).

How do you think studying a foreign language helped to prepare you for your career?
I moved to Paris right after university, where I have lived since (with extensive time spent in Brazil, the UAE, and Holland). I have done several things since I finished my last degree, including being a French juriste in corporate compliance and working in the French world of wine. I have not spoken English in most of my day-to-day life since I graduated from SMU, so from a practical perspective, my learning French was helpful to my acculturation. In fact, I am currently undergoing the French naturalization process. Studying French has not necessarily only prepared me for a career, but rather for a life, which is much more interesting. Foreign languages open worlds. You are able to see other ways of being, of doing things, of thinking; so in fact, you become a more nuanced and critical thinker.

What advice do you have for other students thinking about majoring or minoring in a foreign language?
Take foreign languages more seriously. Opportunities are not limited to your city or country when you study a language (or two or three).