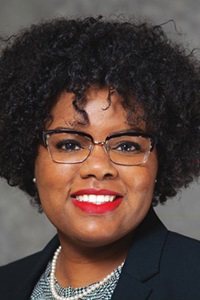 Dr. Johnitha Watkins Johnson serves as a Clinical Assistant Professor in the Annette Caldwell Simmons School of Education and Human Development at Southern Methodist University. In 2013, she earned her Ph.D. in Curriculum and Instruction with a focus on Urban Education. During her doctoral studies at Texas A&M University, she mentored pre-service and in-service teachers in various contexts, and began her research agenda, which focuses on equity in education. She also holds a M.S. in Juvenile Forensic Psychology from Prairie View A&M University.

Dr. Johnson began her career as an Associate Psychologist at the Texas Youth Commission (TYC). During her tenure at TYC, she administered and interpreted psychological, personality, and intellectual assessments; assessed juveniles’ risk for suicidality; and provided intermittent individual counseling. She later transitioned into education and has spent several years as a special education teacher and university professor.

Dr. Johnson received her B.S. in Psychology from Prairie View A&M University, a distinguished HBCU. She is both pleased and honored to work in the Simmons School of Education.

Johnson, J. (2016). “All I do is win…no matter what:” Low-income African American single mothers and their daughter’s unrelenting academic achievement. Journal of Negro Education, 85(2), 156-171.