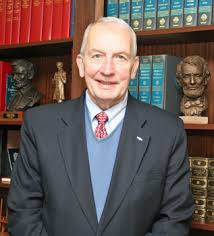 In 2003, Frank Williams was appointed by President Bush to the United States Court of Military Commission Review. He became the Chief Judge in 2007 and served until December 2009. Prior to this appointment, he served on the Supreme Court of Rhode Island, beginning his appointment in 1995, and rising to the position of Chief Justice in 2001.

To learn more about this interviewee, please consult some of the following links.