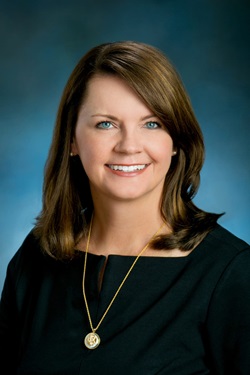 Dr. Melinda (Mindy) Sutton '97 joined the University as Associate Vice President for Student Affairs and Dean of Students on May 20, 2019, following a national search.

Sutton served as the Assistant Vice Chancellor for Student Affairs and Dean of Students at the University of Mississippi, a position she held from June 2014 to May 2019. She returned to the Hilltop in her new role, having previously served as Associate Dean of Student Life in SMU's Division of Student Affairs from 2012 to 2014. Sutton also earned her bachelor's degree in 1997 from SMU, where she was a Hunt Leadership Scholar.

Sutton is responsible for overseeing the Dr. Bob Smith Health Center, the Dedman Center for Lifetime Sports and the Office of the Dean of Students, which includes Student Support, Violence Prevention and Support Services, and Student Conduct and Community Standards.

A native Texan, Sutton earned her undergraduate degree in public relations with minors in English and French from SMU; a master's degree in higher education and student affairs from Indiana University - Bloomington; and a doctoral degree from the University of Texas at Austin in educational administration, focusing on higher education leadership.