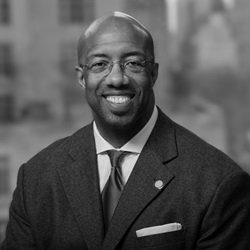 In his seven years as president of Dallas' Paul Quinn College, Michael Sorrell has brought new recognition, programs and funding to the 142-year-old historically black college. A former Dallas attorney and special assistant to President Bill Clinton's executive staff, Sorrell and the college have accepted awards such as 2012 Historically Black College and Universities Male President of the Year, 2012 Top Liberal Arts HBCUs in America and 2013 HBCU Best Business Program. New programs at Paul Quinn College include razing the football field to create a community garden that supports local food banks. With the help of the largest gift in the school's history, $4.4 million from Trammell S. Crow, construction will soon begin on the college's first new building in 37 years – a residential center.

As Sorrell develops his vision for Paul Quinn, he continues his own education. He is a doctoral student in the University of Pennsylvania's executive doctorate in higher education management program.

The first definition of dyslexia was developed in 1968 at the Luke Waites Center for Dyslexia and Learning at Scottish Rite Hospital for Children in Dallas. Waites established in 1965 one of the first programs in the world at Scottish Rite to identify and treat children with learning disorders, particularly dyslexia. Since then, the center's team has demonstrated that, through research, evaluation and treatment, children with dyslexia can learn to read and be successful, despite their learning differences.

The Dyslexia Training Program, a two-year intervention program, was developed at the Waites Center and is used throughout the United States. Medical Director Jeffrey Black and Administrative Director Gladys Kolenovsky direct the Waites Center, which provides diagnostic evaluations and recommendations for hundreds of children with learning disorders each year. The center also provides training for teachers and learning therapists and sponsors research on the causes and treatment of dyslexia.

Big Brothers, Big Sisters of America was created in 1904 to bring role models into the lives of at-risk children. Today the mentoring program serves 300,000 children in the United States and 12 countries, providing and monitoring one-to-one volunteer mentors who develop positive relationships with children ages 6 to 18. Big Brothers, Big Sisters also sponsors African American, Native American and Hispanic mentoring programs in addition to programs for children of military parents and children of incarcerated parents.

Research shows that children in the program get along better with their families and are less likely to engage in risky behaviors. Participation in Big Brothers, Big Sisters also has a measurable, positive effect on education. Research shows that 87 percent of children in the program maintained or improved in their educational expectations and 84 percent maintained or improved their grades. Participants are more likely to graduate from high school and reach a higher lever of education. Pam Iorio, CEO of Big Brothers, Big Sisters, will accept the award.