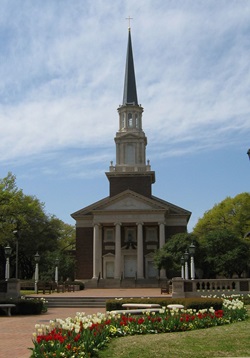 Perkins Chapel, having served the campus and community for 48 years, was renovated in 1999 and again in 2019 after an unfortunate steam leak. The efforts were guided by the need to ensure the chapel's usefulness as a place of worship for a variety of religious and liturgical traditions, education for the seminary, and public service for the community, while maintaining its historical, architectural, and theological integrity.

Consistent with its Georgian attributes and modified basilican plan, the sanctuary is secured by a chancel of great stability in which all elements support the central action of liturgy—the sacred work of the people. The chancel extends into the nave, enabling the congregation to be participants in the worship experience rather than spectators. The wide space also allows for greater flexibility in the presentation of music, dance, and alternative liturgies, with front pews removable for larger performances and greater accessibility.

The chancel's altar, pulpit, and font, designed by liturgical artist Lyle Novinski, have their antecedent in English "Regency" furniture of the early 19th century, using cherry, with maple columns and Malaysian padouk details complementing the Georgian grammar of the chapel. The single, freestanding pulpit, unites the Word read and expounded. The pulpit's top is flat, uniting congregation and speaker rather than serving as a place where distinctions are made between keepers and hearers of the Word. The font's large spun basin is hand-fashioned in bronze.

Gilded Corinthian capitals and dentil work highlight once-hidden architectural details and emphasize changes in plane and light throughout the room. A lighting system further emphasizes the coloration and volume of the chapel space.

A wood floor enhances Perkins Chapel's exceptional acoustics for instrumental and choral arrangements. The multimedia and audio system enables multiple configurations of musicians, leaders, and virtual participants. A Steinway grand piano is a gift of SMU trustee Dr. Bobby B. Lyle ('67) of Dallas, in honor of the Rev. Katherine Glaze Lyle ('71,'73,'94).

Since 1997, the chapel's balcony has housed the renovated 12-rank mechanical action organ originally built for SMU's Meadows School of the Arts in 1969 by Dallas organ builder Robert Sipe.