Surgeons will soon be deploying armies of tiny robots to perform microsurgeries throughout the body. Though this may seem like science fiction, our research team at SMU-Lyle has developed a microrobotic technology that is being considered for an important mission—drilling through clogged arteries. 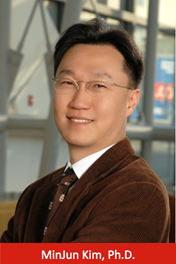 This new innovation in nanomedicine takes the form of small microbeads that join together to form a corkscrew-like structure capable of navigating the treacherous waters of the body’s vascular system. The robotic microswimmers are made up of tiny oxide beads as small as 50 nanometers, joined together in a chain. These beads are composed of inorganic, biocompatible materials that will not trigger an immunological response.

Dr. MinJun Kim is the Robert C. Womack Chair in Engineering and professor in the Department of Mechanical Engineering at SMU-Lyle. He is the recipient of numerous awards and prestigious honors including the National Science Foundation CAREER Award (2008), Human Frontier Science Program Young Investigator Award (2009), Army Research Office Young Investigator Award (2010), Alexander von Humboldt Fellowship (2011), Top 10 Netexplo Award (2016), and KSEA and KOFST Engineer of the Year Award (2016). He is a fellow of the American Society of Mechanical Engineers and the International Society of Bionic Engineering.