Restoring Sight to the Blind: Lessons on How to Organize Engineering Innovations for Societal Impact 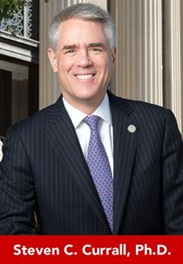 “This book offers a recipe for reversing worrisome trends in America’s leadership in science and technology and the competitiveness of its industries through enhanced partnerships among universities, industry, and federal agencies. At a time when federal budgets are severely constrained, it is all the more important to ensure those resources are well spent.”

Appointed SMU’s Provost and Vice President for Academic Affairs in 2016, Steven Currall is a psychological scientist and holds faculty appointments in three of our schools – the Cox School of Business, Dedman College of Humanities and Sciences, and the Lyle School of Engineering.

Prior to joining SMU, he spent nearly half of his career as a professor at Rice University, where he held an endowed professorship. More recently, Provost Currall served as a Dean at the University of California, Davis. Prior to California, he served as a Vice Dean and a Department Chair at University College London. He was Vice Chair of the Board of Directors of the University of California Global Health Institute. He has been a grantee on over $21 million in research funding, most of which came from the National Science Foundation and the National Institutes of Health. He is a Fellow of the American Association for the Advancement of Science.;

Provost Currall received his Ph.D. in Organizational Behavior from Cornell University, a Master of Science in Social Psychology from the London School of Economics and Political Science, and a Bachelor of Arts in Psychology from Baylor University.