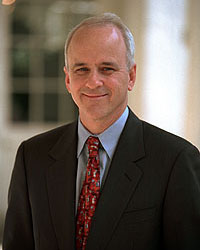 Jim Towey served as Director of the Office of Faith-Based and Community Initiatives from 2002 until 2006 when he went into academics, becoming president of Saint Vincent College. Later, he became president of Ave Maria University. Before serving under President Bush, he worked with Mother Teresa of Calcutta and founded Aging With Dignity, a private, non-profit organization.