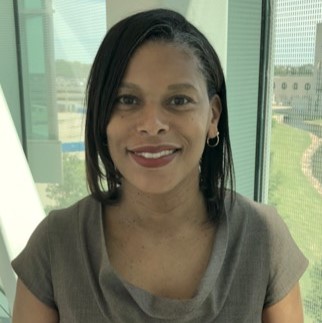 Dr. Conrad is a historian of the Civil Rights Movement and how it intersects with the American presidency. She joined the Center for Presidential History in 2019, and in 2021, she accepted the position of Associate Professor of History at Tarrant County College.

Her book manuscript examines how perceptions of John Kennedy and Lyndon Johnson’s civil rights leadership developed, hardened and continue to circulate within the black community. A key aspect of her scholarship focused on the process by which Kennedy emerged as a civil rights hero for African Americans while Johnson—who fought for and signed into law historic civil rights legislation—has been viewed as being motivated solely by political self-interest.

Sharron received her PhD in Humanities from The University of Texas at Dallas in 2019. She holds a BA in History and Anthropology from Penn State University, and a MA in Public History from Howard University. Previously, she served as Director of Education and Public Programs at The Sixth Floor Museum at Dealey Plaza, interpreting the life and legacy of President Kennedy. Her professional career has included appointments at history museums around the country.

Sharron has published articles on African American chefs in the White House, as well as an excerpt from her master’s research on the life and times of Thomas Dorsey, a black caterer in 19th century Philadelphia. Her research has been supported by a Theodore C. Sorensen Research Fellowship from The John F. Kennedy Presidential Library and Museum, a Moody Research Grant from The Lyndon Johnson Foundation, and a UTD Dean of Graduate Education Dissertation Research Award. In 2017 she was awarded the UTD President’s Teaching Excellence Award.