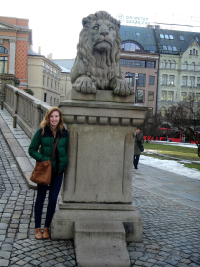 I am a Ph.D. student working with Dr. Karen Lupo at Southern Methodist University. My primary interests lie in zooarchaeology and human-animal interactions. My current research focuses on how European colonization impacted traditional subsistence practices of Native American on the southern Plains. In particular, how traditional lifeways of the Wichita Indians were affected by aspects of European contact including the economy-based hunting of bison for European trade goods. Data for this research will be collected from the faunal analysis of four Wichita archaeological sites along the Red River of Oklahoma and Texas. These include the Upper Tucker, Coyote, Glass, and the Longest sites that date from the Late Prehistoric through the mid to late 18th century. My past research used faunal analysis to understand trade processes and the impacts of Christianization during the Viking age on the Swedish Island of Gotland in the Baltic Sea.