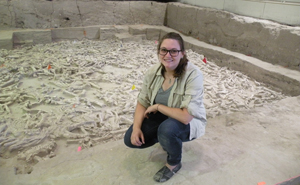 After graduating from Loyola University Chicago with a BS in Anthropology and BA in Environmental Studies, I landed at Southern Methodist University to continue my research on hunter-gatherer adaptive strategies in Pleistocene North America. My interests include some staples of Paleoindian archaeology, such as lithic technology, lithic raw material economy, and mobility and settlement strategies. Currently, I am writing my dissertation on the Mountaineer Folsom site near Gunnison, Colorado, where there is clear evidence of multiple dwelling structures. Mountaineer provides unique circumstances for exploring how a Folsom community functioned in a long-term residential setting - something rarely seen in the Paleoindian archaeological record that was nevertheless an important part of hunter-gatherer adaptations. My goal is to study the interrelated aspects of risk minimization, economic integration, and social relationships in Folsom society by drawing on concepts from household archaeology and hunter-gatherer ethnography and applying them within a human behavioral ecology theoretical framework. Ultimately, this research should be applicable to investigation archaeological hunter-gatherer societies writ large.

Title of Dissertation: Folsom Settlement Organization in the Southern Rocky Mountains: An Analysis of Dwelling Space at the Mountaineer Site

2012 Eppich, Keith, Brooke Morgan, Dawn Crawford, Kylie Quave, and Sunday Eiselt. Student Laboratory Manual for ANTH 2363: The Science of the Human Past. Manuscript on file at the Department of Anthropology, Southern Methodist University.