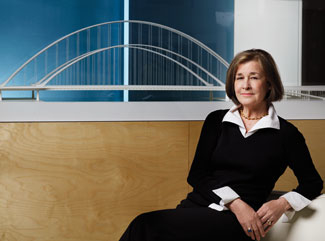 After Dallas residents approved the Trinity River Corridor Project in 1998, then-Mayor Ron Kirk tapped Thomas to raise private funds for the plan. The project consists of 20 miles and 10,000 acres of land in and along the Trinity River Corridor and the Great Trinity Forest. It seeks to protect downtown Dallas against future flooding while supporting environmental restoration, improving transportation, spurring economic development and providing outdoor recreational opportunities.

“We give this award to someone with courage, someone who responds to challenges with a sense of grace and ethical direction,” said Maguire Center Director Rita Kirk. “Gail Thomas certainly represents all of those things.”

In addition to her Trinity Trust Foundation role, Thomas is director of the Dallas Institute’s Center for the City program, where she teaches and conducts seminars and conferences — something she has done for several decades in several U.S. and international cities.

Thomas has written the books Healing Pandora: The Restoration of Hope and Abundance, Imagining Dallas and Pegasus, the Spirit of Cities. She co-authored Stirrings of Culture with Robert Sardello and Images of the Untouched with Joanne Stroud. Her next book, Recapturing the Soul of the City, is forthcoming, as is a play she is writing.

“The fact that this award is named for the man who achieved the highest in excellence in public service means a great deal to me,” Thomas says, noting that her first foray into civic work was serving on Jonsson’s “Goals for Dallas” design task force. “When I think about what J. Erik Jonsson did for Dallas — how, in the year following the Kennedy assassination he took office and went on to turn the ‘City of Hate’ into the ‘City of Hope’ — I’m very honored.”

Thomas and her husband, Robert Hyer Thomas ’53, have three children and 10 grandchildren.