For over 30 years, Dr. Flowers has worked with quiet humility to transform a small Episcopal school in one of Dallas’ most struggling neighborhoods into a thriving private school and community center “with a rich reputation for educating children to be confident, morally strong, intelligent, and caring leaders.” 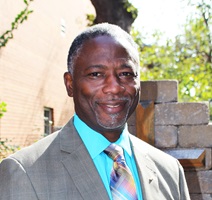 Terry J. Flowers, Ph.D., has served as Headmaster and Executive Director of St. Philip’s School and Community Center since 1983.  Flowers grew up on Chicago’s South Side, ultimately finding a calling to work with young children.  He earned a bachelor’s degree in Elementary Education from Upper Iowa University before pursuing graduate education.  Flowers holds three Master’s degrees: Early Childhood Education (University of Northern Iowa), Curriculum, and Instruction and Educational Administration (Columbia University).  He has taught school in Iowa, Chicago and Harlem, New York.  He completed his doctorate in Education at the Teacher’s College of Columbia University in 1995.

Two decades ago, St. Philip's School and Community Center was a struggling private school in the middle of the highest crime neighborhood in the city.  Boarded up or dilapidated apartments in the neighborhood were open havens for drug dealers and users. To some observers, it seemed folly that the school would embark on the construction of a new playground and try to develop a community garden area on its grounds.  It may well have been, if its director, Terry Flowers, had not met with many of the neighborhood's residents and told them that they, too, had a stake in this community and needed to ensure that this was a haven for the children who wanted to learn there.  And to the surprise of everyone but Flowers, the neighborhood residents responded.  Now St. Philip's is one of the city's better private schools.

"Our kids leave here and go on to some of the most prestigious schools in North Dallas," Flowers says.  "We did a study of our graduates, and we had no high school dropouts--they were all in college or college bound.  I see results in everything we do with the students and the neighborhood."

The mission of St. Philip’s School and Community Center is to provide an excellent school and compatible community services to children, their families, and other residents of southern Dallas, and in doing so, to develop mutual community involvement.  The facility serves as a private, non-denominational Pre-K-6th grade elementary school, community center, food pantry, Meals on Wheels depot and athletic complex.  For over 30 years, St. Philip’s has provided preventative programs to children and their families and worked to improve the community in which they live.  St. Philips' enrollment includes children from across the economic spectrum.  Flowers said some families can afford to pay tuition in one lump sum while others receive scholarships.  Sixty percent of the school's students live outside South Dallas, he said.  St. Philip's has an enrollment of 235, and nearly 1,000 use its community center, Flowers said.

Flowers never shies away from exposing students to positive new opportunities.  He sees the promise of a better future in the eyes of more than 200 African-American and Hispanic students who learn in his classrooms and take advantage of the center’s after-school offerings, such as athletic programs, hot meals and experiments in free enterprise.