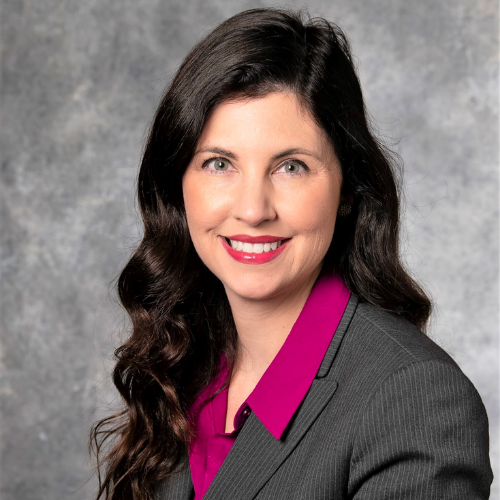 Christine Powers Leatherberry is the Assistant Dean for Administration and Chief of Staff. Prior to that, she was the Director of Alumni Relations and became an adjunct professor in 2020. When she was in private practice, Dean Leatherberry was named one of the Top 50 Up-and-Coming Women Attorneys in Texas from 2017 until 2020 and one of the Top 100 Up-and-Coming Attorneys in Texas from 2018 until 2020. From 2014 to 2020, she was honored on the exclusive list of Texas Rising Stars. She is also listed among the finest lawyers in the area by Best Lawyers in America. D Magazine named Dean Leatherberry on the annual list of Best Lawyers Under 40 for 2020. She keeps up her pro bono family law work through the law school and the Dallas Volunteer Attorney Program.

Dean Leatherberry is board certified in family law by the Texas Board of Legal Specialization and was a partner at Connatser Family Law before joining SMU. She has been quoted in The New York Times and has been interviewed live on WFAA Channel 8 (ABC News) and the radio regarding various family law issues.

In 2021, the Women in Law organization at SMU Law awarded Dean Leatherberry its Distinguished Faculty Member Award, after she was nominated by former students citing her efforts to inspire and promote women at SMU Law and the Dallas community at large. She is a co-advisor for Women in Law and directed the launch of the Jennifer M. Collins Women’s Leadership Initiative at SMU Law.

While studying at SMU Law, she earned a Trial Advocacy Scholarship, was on the Board of Advocates, was selected the Executive Board Member of the Year of the BOA, and interned for Judge Jay Patterson of the 101st District Court.

In fall 2001, she interned in the White House for First Lady Laura Bush in the Projects Office supporting reading and early childhood cognitive development initiatives. In conjunction with that internship, she was awarded a fellowship in The University of Texas System Bill Archer Fellowship Program and later helped found the Archer Fellow Alumni Association. In undergrad, she was also President of Beta Alpha Rho Pre-Law Fraternity.

In 2016, she helped create and still chairs the “Moms in Law” special interest group of DAYL, DBA, and DWLA.  Under her leadership, Moms in Law planned CLEs titled How Men Can be Better Allies to Women Lawyers; Is there a such thing as Work-Life Balance?; How to Seek and Serve Your Clients – Business Development Tips with an Emphasis on Women Attorneys; and Women’s Guide to Building and Protecting Wealth.  Moms in Law also prepared the Parental Leave Initiative report, which was a joint project that surveyed the largest firms in Dallas for their parental leave policies.

Dean Leatherberry is a past chair of the Dallas Junior Board of Directors for Big Brothers Big Sisters and was a Big Sister to the same Little Sister for over 11 years. She is a member of the Junior League of Dallas and recently served on the Centennial Committee, chairing the Archives subcommittee, after previously serving on the Education and Grants for Innovative Teaching Committees. She is currently participating in the 2022-2023 class of the T. Boone Pickens Leadership Institute.

She has volunteered at the North Texas Food Bank, Education is Freedom, Ronald McDonald House of Dallas, and Methodist Dallas Medical Center in the NICU. She has been a Junior Associates Member at the DMA and a mentor for the Dallas Texas Exes Mentorship Program. In 2016-2017, Dean Leatherberry was also on the Host Committee for the Leukemia & Lymphoma Society Luncheon and was on the board of the Preston Hollow Early Childhood Association.

Millennials Have Their Own Unique Way to Avoid Divorce, Texas Lawyer (January 16, 2019)

How Men Can Be Better Allies to Working Lawyer Moms
Chair, Organizer
(June 2019)

How to Make the Legal Profession More Mom-Friendly
Chair, Organizer
(May 2018)

Is there a such thing as a work-life balance as a Mom in Law?
Chair, Moderator
(April 2017)

In a Divorce, Who Gets Custody of Electronic Data?  The Lawyers
The New York Times
October 31, 2016