Advocating for a Fairer Definition of Duress

The current duress statute in Texas harms victims of human trafficking and domestic violence and Hunter Center students are working to change that. In collaboration with the Lone Star Justice Alliance, students drafted a white paper to support a bill that would allow defendants who were coerced into committing a crime to introduce evidence of past trauma related to their abuse. The white paper, and accompanying one pager, explain how the bill would allow judges and juries to consider the coercion and trauma suffered by survivors of sex trafficking and domestic violence when they are forced to commit a crime by their abuser. The research conducted includes a 50-state survey of how other jurisdictions apply the affirmative defense of duress.

Professor Natalie Nanasi and students from the Hunter Center provided testimony to the Texas Legislature in support of a bill that would make the affirmative defense of duress fairer for survivors of human trafficking and intimate partner abuse.


Flawed Design: How the U Visa is Revictimizing the People it was Created to Help

Congress created the U visa in 2000 to provide a pathway to legal status in the United States for immigrant survivors of crime. The visa is a lifeline for victims and a benefit to law enforcement officials, who can better detect, investigate, and prosecute crime with the assistance of survivors. But the U visa’s promise remains unfulfilled due to a series of design flaws.

In partnership with the Human Rights Initiative of North Texas, the Hunter Center’s Report, Flawed Design: How the U Visa is Revictimizing the People it was Created to Help, documents the challenges faced by U visa applicants as they wait nearly a decade for the government to adjudicate their petitions. To uncover the realities of living and working in the shadow of the backlog, Hunter Center students conducted long-form, semi-structured interviews with U visa petitioners and holders, collected stories from immigration practitioners from 9 states, and surveyed 143 immigration practitioners nationwide. The Report documents their findings – that the delay in adjudication has a devastating impact on survivors, causing them to experience job and housing insecurity, medical and mental health struggles, and separation from family members and loved ones.

The Report also critiques the U visa’s mandate that survivors engage with the criminal justice system, shining a light on the ways that the visa reinforces an unequal system and harms survivors – particularly Black and LGBTQIA survivors – who may never be able to access the U visa safely because interacting with law enforcement is not safe for them.

Read the detailed findings, and the recommendations for change, here: http://bit.ly/U-report-2020 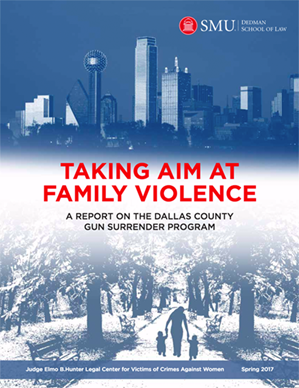 In May 2017, the JUDGE ELMO B. HUNTER LEGAL CENTER FOR VICTIMS OF CRIMES AGAINST WOMEN released a report entitled “Taking Aim at Family Violence: A Report on the Dallas County Gun Surrender Program.” The report is the culmination of a year-long study of a DALLAS COUNTY PROGRAM that provides a mechanism for domestic violence offenders, who are barred from possessing firearms under both federal and state law, a safe and secure mechanism to surrender their weapons. The authors analyzed the Dallas program as well as similar programs in other jurisdictions to provide stakeholders with recommendations and a roadmap for effectively reducing intimate partner femicides due to gun violence.

The Hunter Center continues to take a leadership role in Dallas County's efforts to remove firearms from the hands of prohibited possessors.  Students and faculty have conducted numerous trainings for judges charged with ordering perpetrators of intimate partner violence to surrender their weapons and participate in the Dallas County Gun Surrender Task Force.

Most recently, the Hunter Center produced educational materials for survivors of domestic violence in Texas, including the website DisarmingTexasAbusers.org, to provide survivors with critical information about the law, their rights, and their safety. 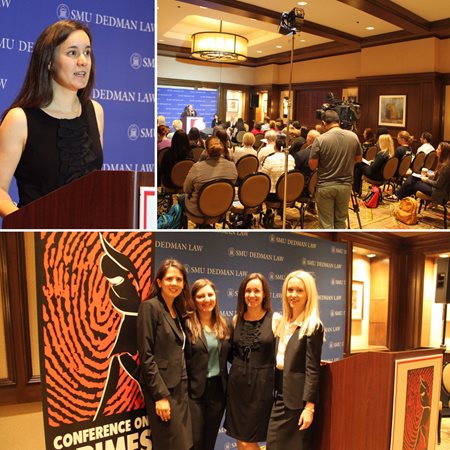 Professor Nanasi and Hunter Center students at a press conference announcing the release of “Taking Aim at Family Violence: A Report on the Dallas County Gun Surrender Program.

Combatting the Repeal of No Fault Divorce in Texas 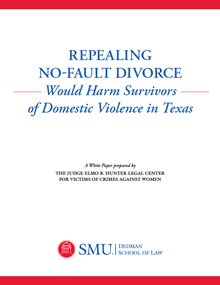 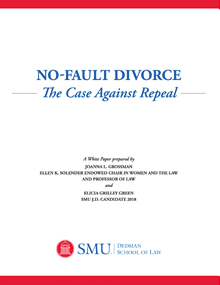 The Hunter Center, along with other SMU scholars, successfully combatted efforts by the Texas legislature to repeal no-fault divorce—and return the state to a bygone era in which marriages could not be terminated without the assignment of blame. In a white paper, the Hunter Center details how requiring proof of fault in order to obtain a divorce would increase the risk of physical and psychological harm to domestic violence victims and their loved ones. The white paper also explains how a repeal of no-fault divorce would have adverse financial consequences on survivors, the court system, and the State of Texas.

The Hunter Center’s white paper is a companion piece to a white paper authored by Professor Joanna Grossman and Elicia Grilley Green of SMU Dedman School of Law. That paper traces the historical and legal origins of no-fault divorce in the United States and explains why no fault divorce is an appropriate and necessary option for the dissolution of an unsustainable marriage. 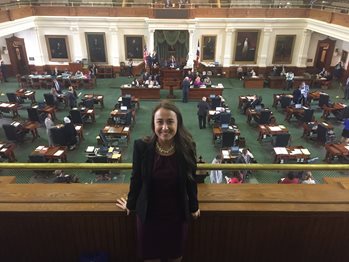 Hunter Center students are actively engaged in legislative advocacy to improve the lives of survivors of human trafficking in the state of Texas. Students worked in partnership with the nonprofit organization New Friends New Life to advance a number of anti-trafficking initiatives in the 2017 Texas Legislative session, culminating in the testimony of Hunter Center student Mackenzie Wortley on H.B. 2509, a bill that would increase access to Orders of Nondisclosure for survivors. 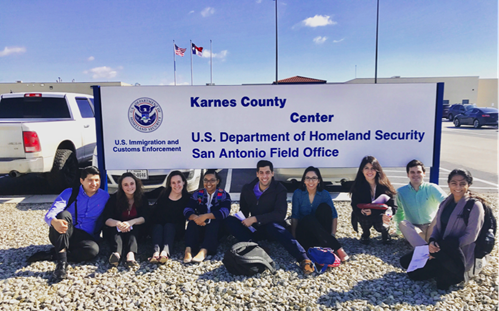 Due to the overwhelming success of the Pop-Up Clinic, the Spring Break program is now a permanent part of the law school's clinical program.

The JUDGE ELMO B. HUNTER LEGAL CENTER FOR VICTIMS OF CRIMES AGAINST WOMEN regularly engages in community education projects that provide critical information and resources about domestic abuse, sexual violence and human trafficking. Examples of our community education include:

Judge Elmo B. Hunter Legal Center for Victims of Crimes Against Women

Resources for the Public