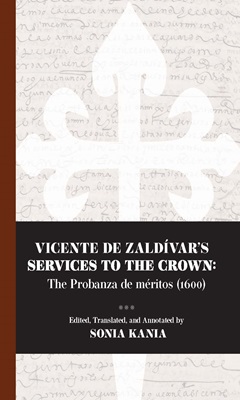 In July 1600, Vicente de Zaldívar, nephew of Juan de Oñate and one of the latter’s principal lieutenants in the Spanish campaign to conquer New Mexico, petitioned his uncle for permission to hold an inquiry into his services as sargento mayor of the expedition.  Zaldívar hoped to present this as documentary evidence to the Spanish king, proving he deserved royal reward.  Known as the Probanza de méritos y servicios, this volume focuses on Part 2, which includes thirteen testimonies from witnesses who were original Spanish colonists to New Mexico.  This document not only contributes to our knowledge of the early history of New Mexico, it also sheds light on the history of the Spanish language in the Southwest.

This is an impeccable nuts-and-bolts, almost matter-of-fact study by a “historical linguist” in the tradition of Jerry R. Craddock and John H. R. Polt’s Zaldívar and the Cattle of Cíbola published in 1999. Language students of the “Traditional Spanish variety of New Mexico, the oldest continuously spoken European variety in the United States,” will be fascinated by Kania’s skillful presentation of transcript and translation. This manuscript is a very specialized philological study, of highest caliber. Nothing was of greater importance to the early Spanish settler families of New Mexico than their language.
John Kessell, Professor Emeritus of History, University of New Mexico

The Cíbola Project’s goal is to make texts of documents of the Hispanic Southwest during the colonial period available to a broad readership through editions that adhere to rigorous editorial criteria in order to maintain textual integrity.  Sonia Kania’s edition represents the ideal that the Cíbola Project has always had in mind: a paleographic transcription fully annotated and accurately translated, with a comprehensive introduction that embraces both the historical background and linguistic features of the text.
Jerry R. Craddock, Director, Cíbola Project, University of California Berkeley

SONIA KANIA is associate professor of Modern Languages at the University of Texas at Arlington where she teaches courses in study of the Spanish language and linguistics. Dr. Kania is a collaborator in the Cibola Project, which is concerned with the edition and publication of documents of the Hispanic Southwest from the 16th-18th centuries. Her research focuses on Colonial Mexican and New Mexican Spanish and historical dialectology. She has published numerous articles in those areas and is author of Mexican Spanish of the Colonial Period: Evidence from the Audiencia of New Galicia (Hispanic Seminary of Medieval Studies, 2010).