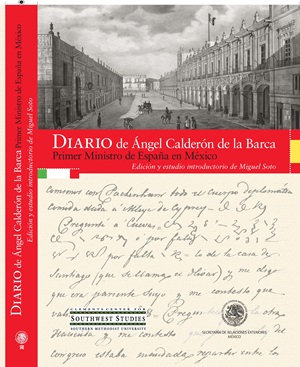 With an introduction and edited by Miguel Soto

In 1836 Mexico and Spain signed the Tratado de Amistad y Comercio, concluding Mexico’s War of Independence from Spain (1810-1821). From 1839 to 1842 Ángel Calderón de la Barca served as the first Spanish Minister to the Republic of Mexico. Some readers may know of his Scottish Bostonian wife’s diary containing personal observations of Mexico. Life in Mexico by Frances (“Fanny”) Calderón de la Barca, first published in 1843 is still in print today. However, it was her husband who faced the challenges of negotiating his way through international tensions and intrigues to build a new foundation of bi-national relations. His job included diplomatic correspondence with his contacts in the Spanish government, which have been available to researchers internationally, but only in 2002 did his private diary, held at SMU’s DeGolyer Library, start receiving attention.

After consulting with Octavio Herrera Pérez, historian from Matamoros, Mercedes de Vega Armijo, director of Mexico’s Acervo Histórico Diplomático at the Secretaría de Relaciones Exteriores, made a special trip to SMU's DeGolyer Library to assess the significance of the diary. She was enthusiastic about publishing it but the challenge was to decipher the numerous sections written in code. After many inquiries to try to find someone who might know how to translate these sections, Miguel Soto Estrada, professor of history at the Universidad Nacional Autónoma de México, asked Adan Benavides, at the Benson Latin American Collection, University of Texas-Austin, who identified it as an early form of Pitman shorthand and copied the guide for Miguel. Thanks to Miguel’s painstaking work not only translating and transcribing the shorthand but also the Latin, French, and other quotes, he was able to put in historical context Calderón’s observations. His research led him to Mexican, Spanish and U.S. archives.

Co-published by the William P. Clements Center for Southwest Studies at Southern Methodist University and the Secretaría de Relaciones Exteriores of Mexico, 2012