During the academic year the Clements Center organizes evening lectures for members of the community, SMU faculty, staff, and students who are interested in topics related to the Texas, the American Southwest and the U.S.-Mexico borderlands. Presentations are wide-ranging and interdisciplinary, often reporting on current research, recent publications, or new exhibitions 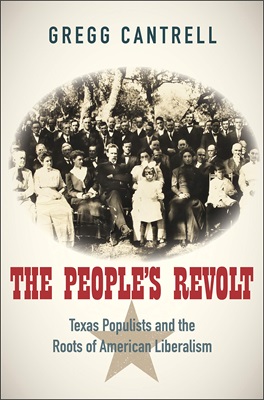 The People's Revolt: Texas Populists and the Roots of American Liberalism

Please register in advance for this webinar:

In the years after the Civil War, the banks, railroads, and industrial corporations of Gilded-Age America, abetted by a corrupt political system, concentrated vast wealth in the hands of the few and made poverty the fate of many. In response, a group of hard-pressed farmers and laborers from Texas organized a movement for economic justice called the Texas People’s Party—the original Populists. Arguing that these Texas Populists were among the first to elaborate the set of ideas that would eventually become known as modern liberalism, Gregg Cantrell shows how the group broke new ground in reaching out to African Americans and Mexican Americans, rethinking traditional gender roles, and demanding creative solutions and forceful government intervention to solve economic inequality. Although their political movement ultimately failed, this volume reveals how the ideas of the Texas People’s Party have shaped American political history.

Gregg Cantrell holds the Erma and Ralph Lowe Chair in Texas History at Texas Christian University. His previous books include Stephen F. Austin: Empresario of Texas and The History of Texas.  Cantrell was a fellow at the Clements Center for Southwest Studies at SMU in the inaugural class of 1996-1997.