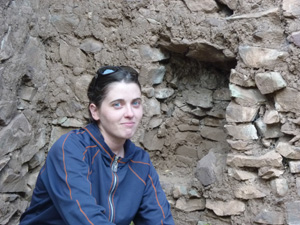 Maeve Skidmore received her bachelor's degree in archaeology at Boston University in 2004 and a master's degree in anthropology at SMU in 2008. She is interested in the formation, expansion and dynamics of early states, particularly those of Andean South America (Moche, Tiwanaku, Wari). Maeve's current research is focused on domestic and mortuary contexts at Hatun Cotuyoc, a sector of the Wari (AD 600-1000) colony at Huaro in the Cusco region of Peru. Her work looks to evaluate how households were integrated into Wari political, economic and social networks through time, as well as the degree to which households participated in local networks unconnected to, and sometimes competing with, those of the Wari. This research aims to highlight the construction of state power through means that have traditionally received less attention than the more militaristic aspects of statecraft usually emphasized for the Wari, and also to consider how an increasing database of information on domestic life across Peru in the Wari Period contributes to modeling Wari political organization. In addition to her work in Cusco, Maeve has also conducted archaeological fieldwork in northern Belize, on the central coast of Peru, in highland Bolivia, and in Texas.

Seed Grant for Research, "Excavations at Middle Horizon sites in the Cusco Region of Peru" (2007) and "Excavation and mapping of Hatun Cotuyoc" (2010), Institute for the Study of Earth and Man, Southern Methodist University