DALLAS (SMU) – The Perkins School of Theology Alumni/ae Council has selected the Rev. Donald W. Underwood and the Rev. Dr. Sidney G. Hall, III as recipients the 2020 Perkins Distinguished Alumnus/a Award. The Award recognizes Perkins graduates who have demonstrated effectiveness and integrity in service to the church, continuing support for the goals of Perkins and Southern Methodist University, outstanding service to the community, and exemplary character.

“With their faithful church service as United Methodist pastors, combined with their extensive community service, these two alumni exemplify our mission at Perkins – to be an academy for the whole church in the whole world,” said Dean Craig C. Hill. “We congratulate both Don and Sid for these well-deserved honors.” 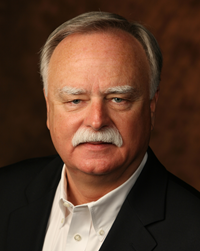 Underwood received a Master of Theology at Perkins in 1973 and was ordained as an elder in the North Texas Conference of the United Methodist Church. In 1983, he was appointed to lead pastor of Christ United Methodist Church in Plano, Texas, a position he held until his retirement in May 2020. Christ UMC is one of the largest congregations in the denomination, with 1500 average weekly attendance. Under his leadership, Christ UMC has launched several ministries to serve lower-income persons in Plano, including Project Hope, which helps struggling families break the cycle of poverty; House on the Corner, a homebuilding effort; Hotel Katrina, a shelter that provided emergency and long-term support for 71 evacuees from Hurricane Katrina in 2005; and School on Sunday, a tutoring program. Underwood is also the author of two books, The Long View: Reflections on Life, God, and Nature (2011) and Pray Like Jesus: Rediscovering the Lord’s Prayer (2017).

“Don is one of the most imaginative and creative ministers in United Methodism,” Bishop Michael McKee (M. Th. ’78) said in a letter affirming the nomination. “His ministry is a witness to Christ and to the impact Perkins has had on his life.” 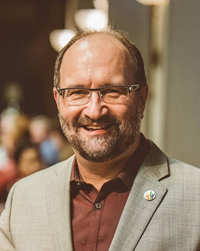 Hall (M.Th. ’84, D. Min. ’88) is an ordained elder in the Rio Texas Conference. He has served as lead minister of Trinity Church of Austin, Texas, a United Methodist congregation that—in 2015—co-affiliated with the United Church of Christ to become a Union Church, for 33 years. He is a leader in the Reconciling Ministries Network, which advocates full inclusion of LGBTQIA+ persons in the United Methodist Church, and has served on numerous boards of Austin nonprofits including Political Asylum Project of Austin, Texas Freedom Network and the Austin Mayor’s Task Force on Human Rights. In 1991, Hall was the recipient of the first annual Jewish Community Friendship Award by the Jewish Federation of Austin. He is the author of Christian Anti-Semitism and Paul’s Theology (1993) and co-author of Three Mystics Walk into a Tavern: A Once and Future Meeting of Rumi, Meister Eckhart, and Moses de León in Medieval Venice (2015).

In a letter supporting Hall’s nomination, Cecile Richards—former president of the Planned Parenthood Federation of America—praised his interfaith work in the early days of the Texas Freedom Network/Texas Faith Network.

“Sid was able to bring together leaders from the Jewish faith, Baptist ministers, and Catholic, Presbyterian, Episcopal and Methodist clergy, to organize together around common beliefs,” said Richards, who is Founder of Texas Freedom Network/Texas Faith Network. “It was hard work, and Sid’s gentle nature and patience helped the group stay together and begin to work effectively as one.”

Criteria for the Distinguished Alumnus/a Award include demonstrated effectiveness and integrity in service to the church; continuing support and involvement in the goals of Perkins School of Theology and Southern Methodist University; demonstrated service in the wider community; exemplary character; alumnus/a of Perkins School of Theology, including Course of Study School.

Underwood and Hall will be honored next fall, along with the 2021 recipient(s), at the 2021 Distinguished Alumni Award Banquet in November 2021, in the Great Hall of Elizabeth Perkins Prothro Hall on the campus of Southern Methodist University.

The 2019 Perkins Distinguished Alumnus/a was the Rev. Katherine Glaze Lyle, an active community volunteer and retired pastor in the North Texas Conference. Read about her award here.