At Agape Memorial United Methodist Church in Dallas, there’s a Spanish language worship service attended mostly by recent Hispanic immigrants. The English language service draws Hispanics who have been in the United States for years or even generations.

If getting those groups to feel and act like one church weren’t a big enough challenge, the Rev. Martha Valencia must deal with rapid demographic shifts in the neighborhood, including an influx of young professionals from various ethnic backgrounds.

No wonder she feels she could use a little help.

“Our community is changing right before us,” said Valencia, Agape Memorial’s pastor. “That’s what motivated me to come glean from everyone else – to see what’s working, and see what’s not.”

Valencia belongs to a 25-member cohort of United Methodist clergy and laity getting cultural competency and Hispanic ministry training provided by Perkins School of Theology and underwritten with a $70,000 grant from The United Methodist Church’s General Commission on Religion and Race. The 12 women and 13 men in the group include representatives from Texas, Oklahoma, New Mexico, Kansas, Louisiana, Tennessee, Kentucky, Virginia, North Carolina and South Carolina.

Those who complete the course get a certificate from Perkins and CEU credit, and are eligible for a stipend up to $1,000 to help them share what they’ve learned. 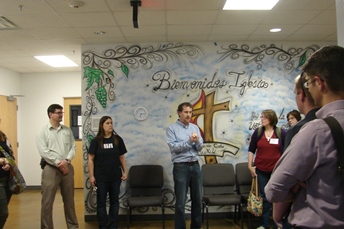 The Rev. Owen Ross (center) and the Rev. Amy Spaur (to his left) spoke recently to a group of clergy and laity getting training from Perkins School of Theology in cultural competency and Hispanic ministry. Ross and Spaur lead Christ's Foundry United Methodist Church, a thriving Hispanic congregation in Dallas. The church offers both a bilingual service and a service in Spanish only.

(Photo: Sam Hodges)
“They will go back to their churches, their districts, their conferences and offer this training to create a ripple effect,” said Dr. Philip Wingeier-Rayo, MAP director.

Most of the participants are from Texas. (Some, like Valencia, got their seminary education at Perkins.) One purpose of the training by MAP is to ease the unification of the Rio Grande Conference – which has long had a Hispanic identity – with the Southwest Texas Conference into the new Rio Texas Conference. But increased cultural competency and more effective Hispanic ministry are the larger goals, and participants come from several United Methodist annual conferences outside Texas.

During their March residency at Perkins, the group played a role-playing game called “BaFa BaFa,” designed to boost awareness of cultural barriers and stereotypes. They heard from a range of speakers, including the Rev. Robert Hunt, Director of Global Theological Education at Perkins, and someone who has taught in both Malaysia and Austria. 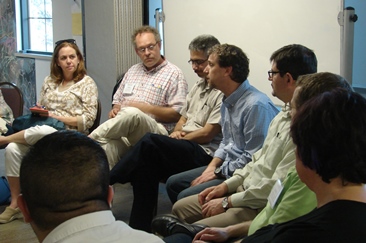 The Rev. Owen Ross (center, in blue shirt) spoke recently to a group of United Methodist clergy and laity getting training from Perkins in cultural competency and Hispanic ministry. Ross, a former Peace Corps volunteer in Ecuador, started Christ's Foundry United Methodist Church in a Hispanic part of Dallas. It's now thriving, with multiple services and ministries, and occupying a new, paid-for $2.5 million building.

Ross noted that the church’s bilingual worship service is growing rapidly. If he preaches in English, his associate, the Rev. Amy Spaur, interprets in Spanish. She’s encouraged to be just as forceful, just as quick with a hand gesture or thump of the Bible, as he is.

“Our bilingual service is designed for the monolingual speaker, whether that be English or Spanish,” Ross told the group. “We design it in a way that neither language should feel secondary. … The desire is that no one will know which language is being interpreted.”

Ross answered questions about everything from the architecture at Christ’s Foundry to its success in getting financial support from United Methodist Church’s in wealthier parts of Dallas.

Among those listening carefully to Ross’s witness was the Rev. Marilyn Jones, pastor of Meadowbrook United Methodist Church in Fort Worth.

Meadowbrook is embracing the diversity in its midst, to the point of planning a new, multi-cultural worship service. So Jones eagerly applied for the Perkins training.

“My biggest motivation was just to find tools to help me raise my awareness to the part that culture plays in our relationship together and our life together – how we can see similarities and overcome differences,” Jones, a Perkins graduate, said.

Martha Canizales, a laywoman considering ministry, joined the Perkins group from 1Love United Methodist Church in Kenner, La. The church plant already consists of African-Americans, Hispanics and Anglos, but the hope is Asians and others will join.

“Our dream is big,” she said during a break in the meeting at Christ’s Foundry.

The Rev. Robert Perales grew up in the Rio Grande Valley, and now serves as associate pastor at McAllen First United Methodist Church, a mostly Anglo congregation in a community that’s overwhelmingly Hispanic. But the church’s Hispanic contingent is growing, so Perales – a Perkins graduate – sought the cultural competency training.

“I’m hoping that, through this cohort they’ve put together, I’ll be able to get the tools to help people bridge those cultural differences … in a way that’s fruitful for the gospel,” he said.